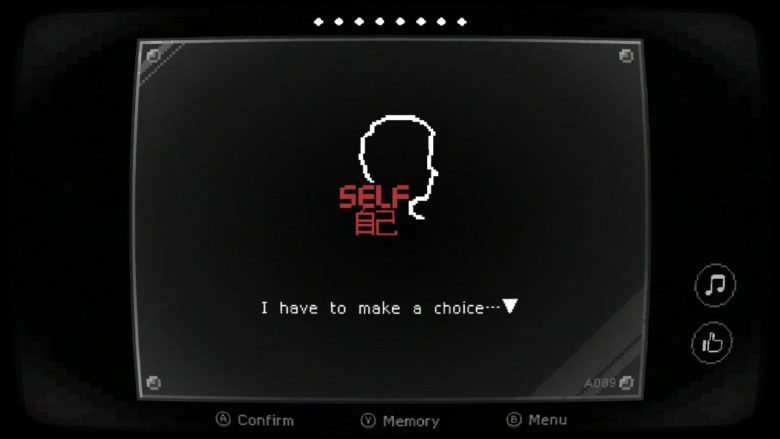 SELF is a text-based adventure game available on both the Nintendo Switch and on Steam for PC. The developer doBell describes SELF as a suspenseful Kafkaesque text-based adventure game, and it seems apparent from both the art style and mini-game design that they took inspiration from the much-revered Undertale. So does it have the SELF-worth for $6.99 on the Switch, or does it find its-SELF in need of SELF-review? Here’s our review for the Nintendo Switch.

As I began to play SELF I initially thought that the story it starting telling was strange but altogether captivating. I was really curious as to why this young boy’s father was missing and why everyone – even his mother – seems to have either forgotten about or are purposefully avoiding the subject of his dad. The story started off being told via pretty easy to understand and follow-along dialogue boxes, with an occasional choice between two options for the young boy to either say or do. But the ease with which I could follow the story quickly melted away, like a melting clock in a Salvador Dali painting. 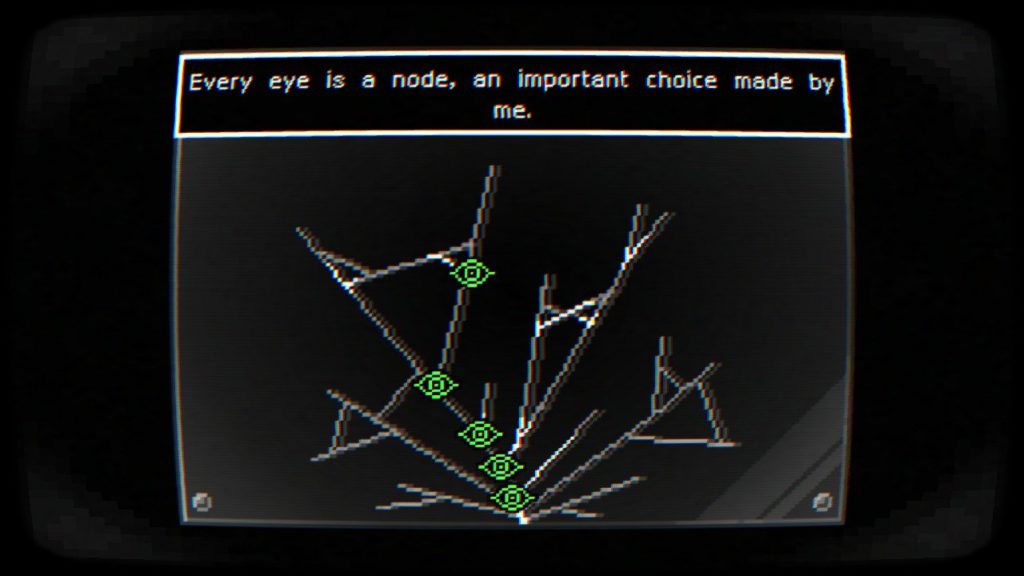 The Kafkaesque description of SELF is very appropriate, although I found the story too lean more on the absurdist and surreal side rather than featuring themes such as atonement and mystical transformation. The father-son relationship is the core of the story, and instances like memory fragments from the perspective of the father felt extremely impactful to me. For instance, one memory where the son wanted the father to play with building blocks but the father wanted to play family instead had such a touching resolution that I felt as if their familial love was almost tangible.

These instances are few and far between however, as the majority of the story in SELF is told much in the same way that nightmares are: incomprehensible and with random developments. The transitions between settings are choppy and hard to follow and are oftentimes as abrupt as if the boy had fallen asleep in one place and awoke in another. Half-way through any given branch of the narrative, the story seems to fall apart and turn into just being plain weird instead of providing any semblance of story to follow. Likewise, several dialogue options were inconsequential as they were often dismissed and the other option was discussed instead. 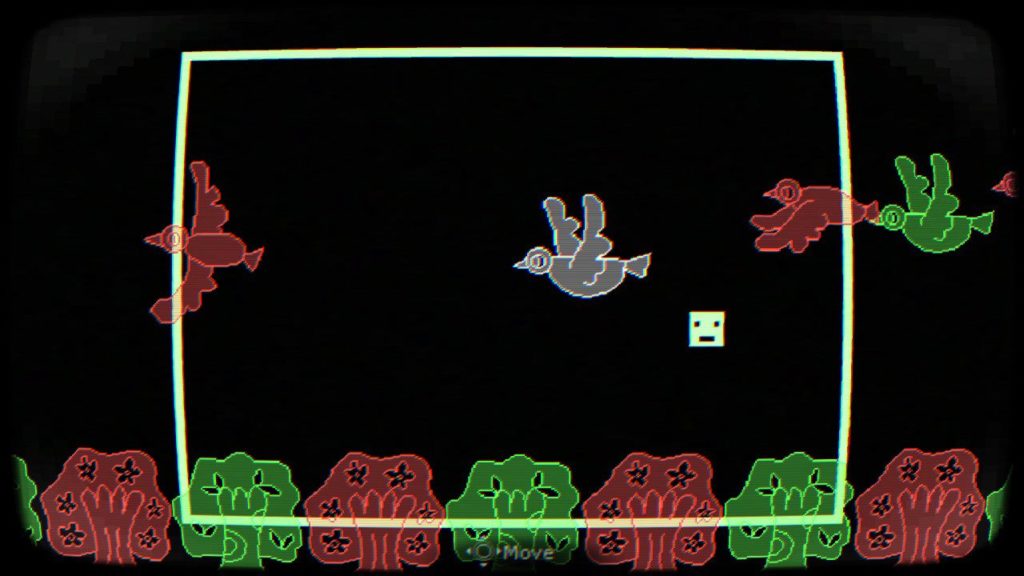 In one instance, I was the boy going down an elevator and meeting two men who took me on a tricycle somewhere – in the next instance I was one of the men, and the boy started acting like some kind of possessed child out of The Shining. That entire transitional phase was convoluted, and it was a good length of time after the perspective had shifted until I understood that it was no longer from the point of view of the boy.

Another time, the boy was in an alleyway and then got into a boat and sailed away while windows on buildings were being opened up and stuff was being thrown out towards the boat. Do these sound like the dreams someone just had and that they decided to add to a game? Absolutely it does. And these instances happened all the time, which detracted from the overall stories that each narrative thread was trying to string along.

The primary transitional medium was a mini-game that looks awfully reminiscent of Undertale’s combat system. You control a small box with a face on it and must either face whatever problem the boy is confronting or avoid it. Green and red images will appear across the screen and fly across in a pattern, much like in a bullet-hell shooter. The green images let the boy face his problem head-on to where he can confront his feelings, or the red images will let him avoid his problems. 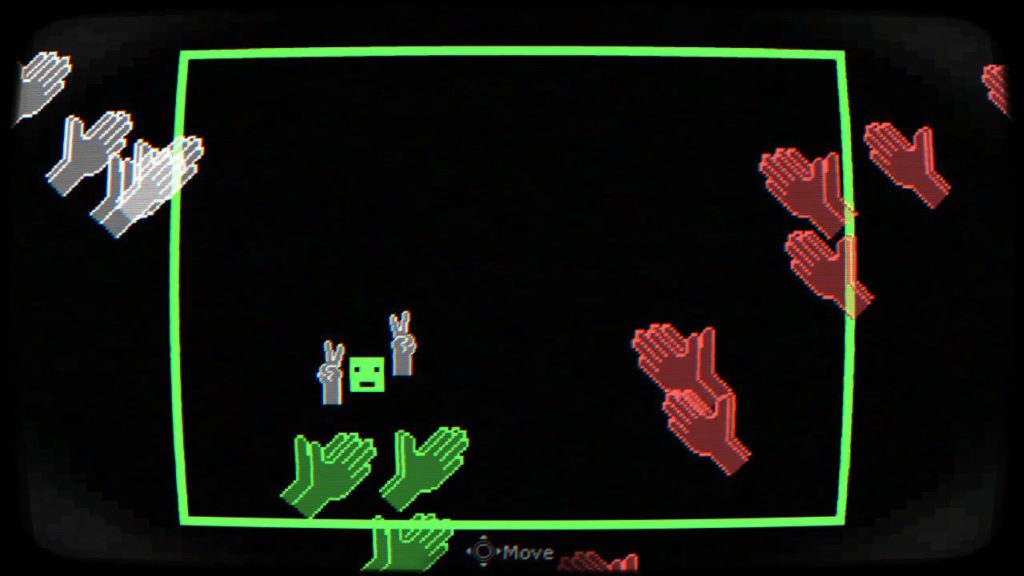 These mini-games were laughably easy, and I never had a problem with making sure I only hit either color. They were so easy that I was actually really disappointed that there wasn’t more to this game. The dialogue choices don’t offer much in the way of influencing the story, and it’s these mini-games that are really the key to unlocking different narrative branches.

I do like narrative games that feature branching stories though, and I did find that the way SELF conveyed these different possibilities to be really unique. Much like how in Detroit: Become Human you could see the many possible outcomes in any given scenario, SELF will display the path you are following along via cracks in a CRTV monitor. After I completed my first ending, I was able to go back and select from which diverging path I wanted to start from – or if I wanted to start over from the very beginning. 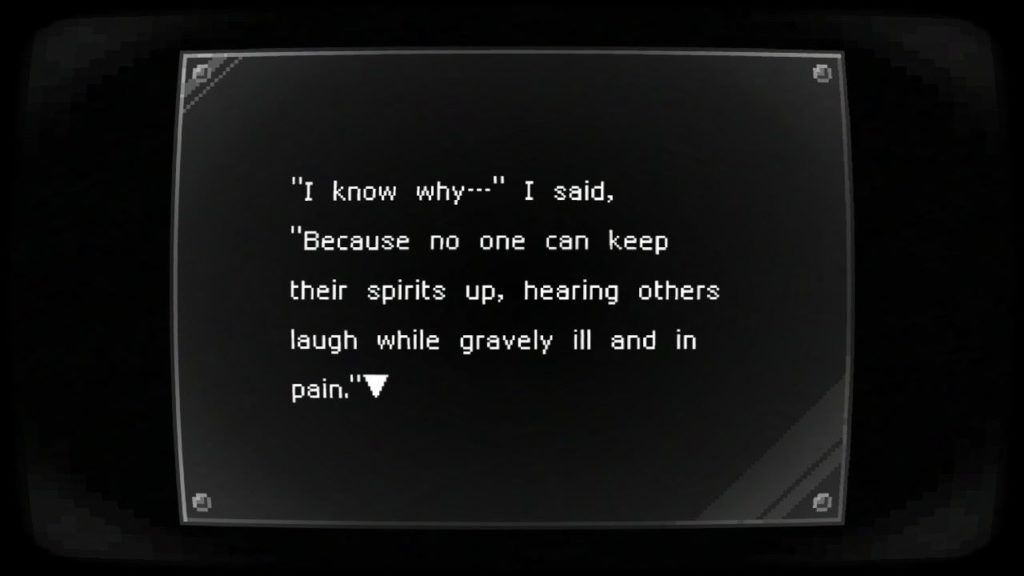 There are 6 different endings in SELF, or 7 if you include the very-funny and very easily-obtained Ending 0 which I got within seconds of starting a new game. Having the option to choose at which point in the story I wanted to continue so I could make different decisions was really nice, although it did make some scenarios harder to follow because I didn’t remember what had just happened story-wise beforehand. I felt like I had a fairly comprehensive story by the end of all 6 actual endings, but I still don’t really know exactly what was going on for this boy to be having all of these lucid dreaming experiences.

Tags: adventure, game, nintendo, review, SELF, switch, TEXT, UNDERTALE
Summary
If you’re a fan of interpreting the meaning behind dreams or stories, or if you like the puzzle aspects in piecing together understanding from a hodgepodge of randomness, then you might really enjoy SELF. But I think there are better options for text-based adventure games out there on the Switch. For the 2-3 hours it took me to complete every ending I don’t feel like it’s worth the time or money that could otherwise be invested into other things. Although a lot of the Kafkaesque story beats, like the father-son relationship and the surreal, absurdist scenarios the boy found himself in, were unique and initially interesting; SELF just didn’t have the metamorphosis it needed to turn into something greater.
Good
Bad
5
Average

Written by
Garrick D. Raley
Garrick Durham-Raley is an avid, almost zealous, video game enthusiast who is still new to writing reviews. He is based out of beautiful Denver, Colorado where he is currently attending University alongside his wife, Sarah; and is a soon-to-be father to his soon-to-be son, Rothgar.
Previous ArticleThe Sorceress blinks into Black Desert MobileNext ArticlePaizo Releases Gods & Magic Supplement For Free