You wake up to the sound of water dripping from the ceiling. It is dark around you except for the light from a distant candle. You walk towards the light, but you are blocked by some wooden planks. Suddenly you have a blade materialize onto your wrist and you can destroy the boards and move into a larger area with portals all around. This is our early access review for Wrath: Aeon of Ruin.

From Developer KillPixel and Publisher 3D Realms comes a new take on a classic genre and released on a modified version of the Quake engine, Wrath: Aeon of Ruin. At the time of this review, the game is on Steam but is still in early access, and it doesn’t include everything that is supposed to be released with the game yet. We will talk about what has been encountered so far to date. 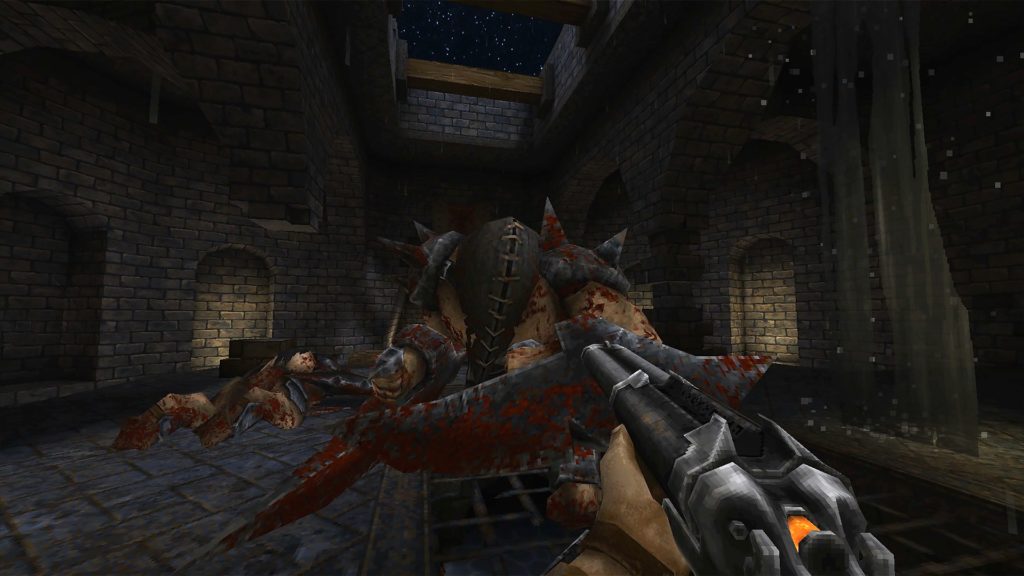 In this game, you take on the role of Outlander as he comes to this dying world to hunt down and destroy the remaining Guardians of the Old World. Your weapons will meet with your enemies and soon chaos will ensue as you hack, slash, and blow them apart. This is about as much as you can look forward to though. The game has no discernable story in early access, but they plan to add story and plot elements after launch. For me, the story is key to a game like this. Without a story, it is just an exercise in how good your aim is.

There are limits to what is included in this version of the game, with only the first full hub world, two levels of the second world, eight out of the fifteen plus enemies and more. Out of the nine total weapons that will be in-game, you will have access to five during this period, and you also have some limited access to leveling up your character through the artifact system. You can equip skills to use while you are playing which benefits your character as you progress throughout the game.

So far, you are on your own as far as knowing where to go within the game. There are portals all around that will take you into different areas of the level you are playing. You know that you have completed the first level when you obtain your first artifact, but beyond that, there are a lot of different ways you can play Wrath. I will say this though, even without the story, the amount of gibs you will get is fun enough to keep you playing. I will give the game another go once it releases so that I can try it out with the story elements.

Tags: 3D Realms, 90s FPS, KillPixel, Quake Engine, Wrath: Aeon of Ruin
Summary
Overall, my feelings about the game are pretty high. I like the old-school feeling that the game gives you with the Quake engine. It brings me back to my childhood of learning to play first-person shooters, and those were good times. As of right now Wrath: Aeon of Ruin is listed for $24.99 USD on Steam and it will be available on launch for Steam, Nintendo Switch, PlayStation, and Xbox. How long will you survive before you die the first time? Enjoy the game if you have the time and money for it. Hopefully, it will continue to get better with more patches.
Good
Bad
8
Great

You wake up to the sound of water dripping from the ceiling. It is dark around you except for the light from a distant candle. You walk towards the light, but you are blocked by some wooden planks. Suddenly you have a blade materialize onto...
0
Average User Rating
0 votes
Have Your Say!
Your Rating: 0
Submit
Write A Review