With yearly-published sports game series like FIFA, NHL or Madden NFL fans always have to ask themselves if the new incarnation is worth their money. Licenses and updated teams aside, gameplaywise the changes are often only minimal. Obviously, it is hard to reinvent the wheel, but still some releases manage to include more useful improvements than others. NHL 2018 offers little innovation, but rounds out the package even further. This is our NHL 2018 Review.

NHL 15 was the first installment for the new generation of consoles and the first one to use the new Ignite Engine. This came at the cost of reducing the available game modes significantly and made NHL 15 a candidate for the worst – or at least heaviest criticized – game of the series. Since then, EA has been mainly rebuilding, with NHL 16 already bringing back most of the requested features. NHL 17 couldn’t provide too much novelty and NHL 18 continues on this path of small improvements.

The first thing that stands out is the new NHL Threes mode. It’s a more casual way of playing hockey with a smaller rink and only three skaters on the ice – as the name suggests. If this sounds familiar to you then you probably have played the funny spin-off 3 on 3 NHL Arcade that was released a couple of years ago. While the new mode seems to draw some inspiration from that spin-off, it doesn’t go that far in terms of “arcadiness”. It uses the same engine and the same player models as the normal 5 on 5, but there are some changes to the rules. You seem to be less likely to draw penalties, but when you do, the opponent automatically receives a penalty shot instead of reducing the number of players. After a goal the receiving team automatically starts with the puck. Face-offs happen only at the beginning of each period. 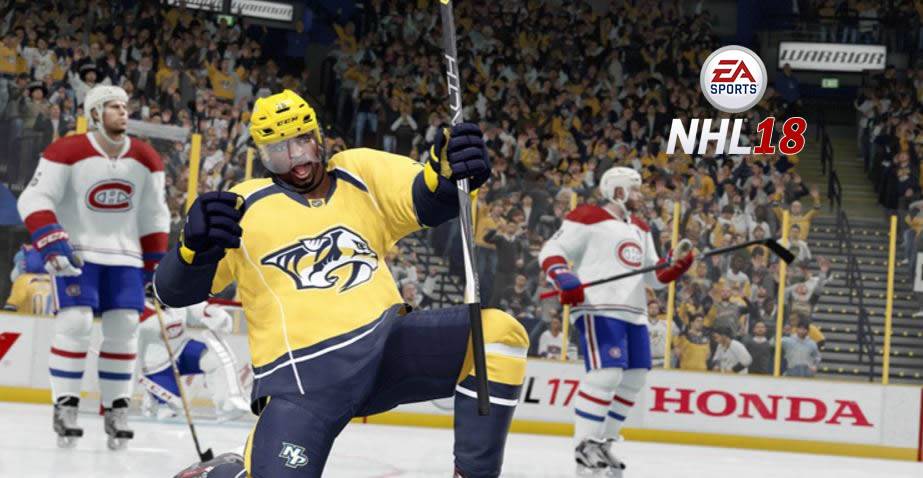 Speaking of periods, the rules are flexible in this mode. Depending on who wins the coin toss, the winning team can decide if a certain number of periods has to be played or if the target is to be the first to score a given number of goals. To make things even more casual you can activate the “Money Puck”, where from time to time you gain two or three goals instead of one if you score, or it subtracts points from the opponents score. For sure, NHL Threes offers a lot of fun with friends who are otherwise not so much into hockey or the NHL-series. There went quite some effort into this new mode. This can not only be seen by the additional rinks and the special over-the-top commentaries recorded for NHL Threes, but also by a huge solo campaign, where you battle one team after another and depending on your performance unlock new goodies, like the jerseys of the beaten team, but even some of their players to improve your own team.

Besides NHL Threes, improvements come only in small doses. One new feature was basically forced upon the developers by the changes in the real NHL. With the new team, the Vegas Golden Knights, an expansion draft has taken place, where Vegas could claim unprotected players from the other teams. Because of this, in the Franchise Mode, you now have the choice between three different alternatives. You can either keep playing with 30 teams, including Vegas and go through the expansion draft or you found your own club – which can even be based in Europe – and make it an even number of 32 teams, with both new clubs taking part in the expansion draft. In general, the franchise mode is what I would call the heart and soul of the single-player-experience in NHL 18. Especially if you have missed a couple of installments of the series you will appreciate the way this mode has gone. It almost has the depth of sports simulations with you taking care of arena improvements, marketing budget, player morale, contracts, transfers, trades and so on.

Of course, the real core of the game is the actual on-ice gameplay. The nicest sugarcoating doesn’t help if the cake tastes bad. Here, the series has constantly received quite a heavy critique by some fans since the implementation of the new engine. While EA has added more control flexibility in terms of offensive dekes and defensive stick handling, this doesn’t change the overall feeling. If you haven’t been happy before, you probably won’t be now. Veterans will immediately feel at home though with the skill stick controls. 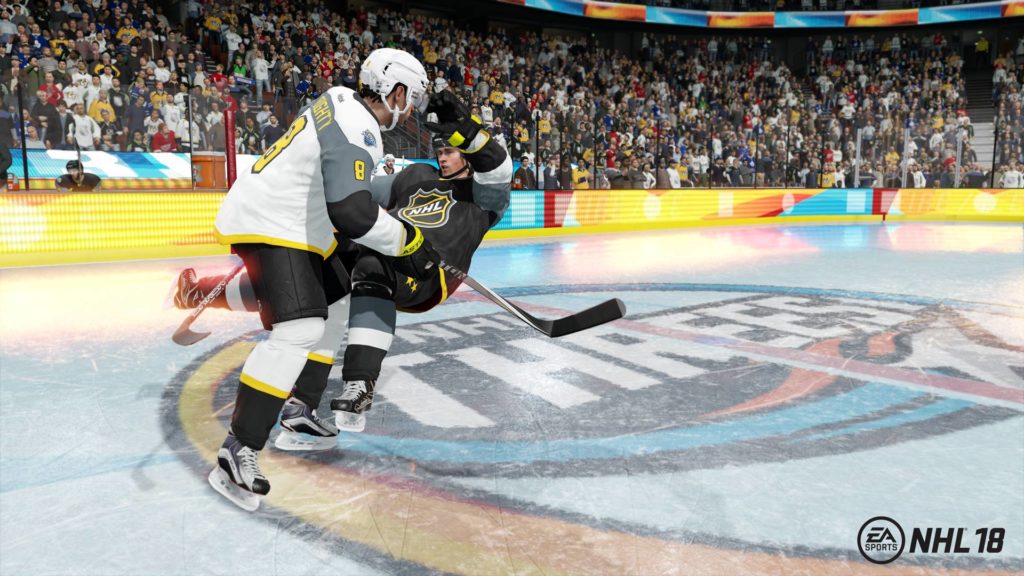 When the play and passing flows there is probably no other EA sports game that has controls feeling as natural as the skill stick does. The new dekes enlarge your arsenal without being overpowered and the defensive stick control adds more realistic moves, as seen in the real NHL. Players who are new to the NHL series will still have a hard time with that unique control scheme that mainly relies on the analog sticks and shoulder buttons. If you are coming from other sports games there is the option of using the so-called hybrid controls that make more use of the face buttons. However, you then are limited in your control set; therefore I rather recommend diving into the way it’s actually meant to play.

The game does a good job in teaching you these mechanics. Next to the vast tutorial that is enriched by real video footage of the Canadian hockey team, there is also an on-ice coach that you might already know from the predecessor. It will analyze your way of playing and, if turned on, make suggestions which controls you should use more often even during the game. You can also activate additional helping systems to improve your game, like a marker that shows where your shots and passes would actually end.

Stagnation – Why you should or shouldn’t buy it

Personally, I am still not completely happy with how the gameplay feels. For instance, penalties are often drawn in very odd ways. Also, the passing feels not always as precise as it is supposed to be and the physics of hits still seems rather unrealistic. However, these are the notions of an “experienced casual” player and real pros might completely disagree with me. One thing that can’t be denied though is that “Be a Pro” still seems to be the unloved stepchild of EA. Especially compared to other series like FIFA or Madden, where we get delivered personal story modes, Be a Pro feels outdated. The only feature it received is that you now can request a trade if you are unhappy with the team that drafted you. Apropos outdated, the same is true for the audio commentaries. Mike Emrick and Eddie Olczyk are the commentators since NHL 15 and while they are doing a fine job, it would be about time to give them some new lines and more interaction. 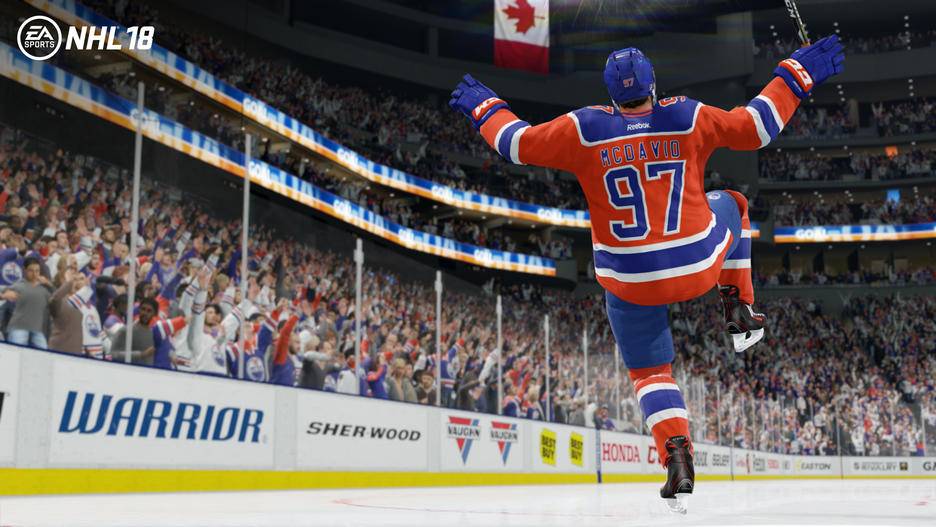 As always, there can’t be given any clear recommendation whether you should buy yet another NHL game or not. If you already own NHL 17 and are more of a casual solo-player, then the new features will not give you enough reason, so it comes down to the well-known question if the updated teams are worth the money for you or not. As fun as NHL Threes might be, it definitely is not reason enough on its own. If you missed a couple of incarnations and your last game is NHL 15 or even an earlier one, then I can recommend NHL 18 without hesitation, as it delivers the whole package in a modern style. Lastly, if you want to play online and are the competitive type, there is probably anyway no way around it.

NHL 18 delivers the creativity of today's young NHL with new Creative Attack controls and the all-new Defensive Skill Stick. Play the fast-paced, arcade-inspired 3-on-3  NHL THREES mode, or reshape the league entirely with the new Expansion Draft and your own custom 32nd NHL team. Whether you’re playing cooperatively or competitively, offline on the couch or online with up to 12 players, NHL 18 delivers more than 64 combinations to team up with or against friends locally or online. No matter how you want to play, NHL 18 offers more ways to play multiplayer with your friends or against your rivals than any other NHL game.
0
Average User Rating
0 votes
Have Your Say!
Your Rating: 0
Submit
Write A Review
Genre:Simulation, Sports
Rating:Teen
Developed By:Electronic Arts
Publisher:Electronic Arts
Modes:Co-op, Multiplayer, Single-player