The rise of the videogame auteur is something to behold. There are high profile names like Hideo Kojima, but few games have the distinction of being made almost entirely by one person. To wit, only two immediately come to mind: Matt Thorson (Celeste) and Eric Barone (Stardew Valley). Jonathan Blow’s Braid can be added in there too, and we should almost certainly add Brian Provinciano to that list. Launched to less critical and social media fanfare than the aforementioned titles, Vblank Software’s Retro City Rampage was an 8-bit delight of a throwback to the original top-down GTAs. Its spiritual sucessor, Shakedown Hawaii bumps the bits up to 16, and with double the bits, comes double the fun (feel free to use that in the promotional materials, guys). In short, Shakedown Hawaii is a fantastic top-down open world adventure with tons of content and quite arguably more tongue in cheek humor than the Rockstar inspiration. It’s a must play, and this is our review.

For about hald of the 10-plus hours I’ve put into Shakedown, I’ve played on PC with a controller, but it plays just as well with mouse and keyboard if you’re wondering. When Vblank sent me my Switch code on Friday, I was overjoyed. This is the ideal place to play the game, and it’s clear that Provinciano thinks so as well – at least in terms of his work being portable. Shakedown Hawaii is available on PSVita, and PHYSICALLY to boot. 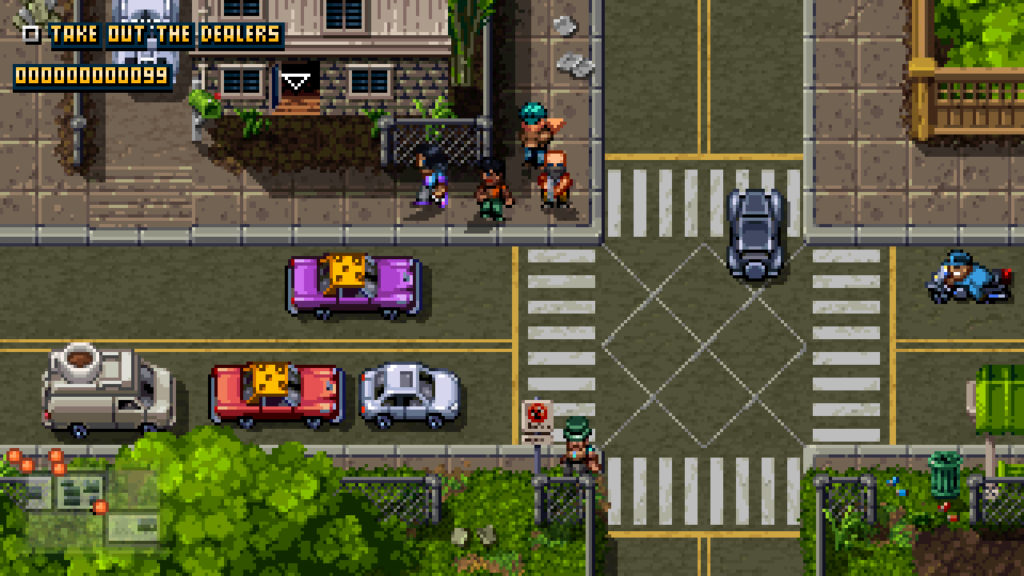 The story mode in SH is where I’ve spent most of my time so far, but there is a free roam mode as well where you can just do whatever you damn well please with no worries in the world except the polic. Playing a 50-plus year old CEO who prides himself on letting his company run itself while he rakes in cash didn’t sound like a treat at first – but then you play and start to do things like buy coffee shops and steal coffee beans to cut costs, or shoot faux Amazon delivery trucks to make sure your retail stores can compete – and it comes together. You’re a villain, not a hero, and it’s all for the sake of rather adept social commentary about capitalism and the dollar over all else.

Vblank’s latest uses a slick auto-save feature that is constantly keeping track of your progress, so if you’re on any system that can’t just be put to sleep like the Switch, chances are you’re not going to lose your progress. This is a massive game too, though its $20 pricetag and 16-bit stylings might bely that fact. The world is roughly three-times the size of Retro City Rampage’s now seen-year-old adventure, and there’s a load more stuff to do in SH to boot. Not only will you be working your way through hundreds of small-to-large scaled main missions, but Shakedown Hawaii throws more side activities at you than you can imagine. 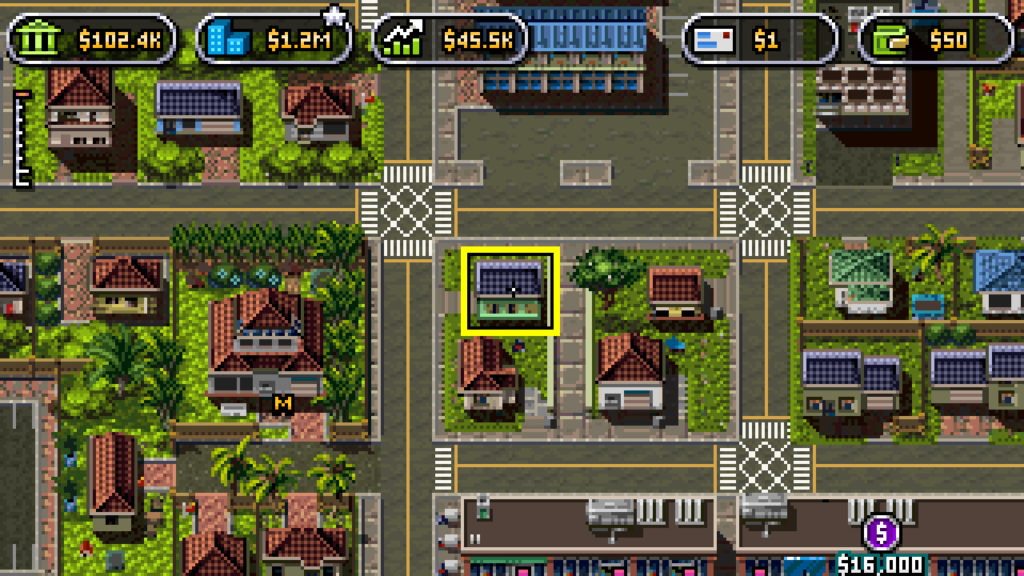 You can ingore them, but why would you? Every one of them is fun, because the world just sort of lets you go nuts in each and every mission or side job it throws at you. There’s an odd sense of completionist love I have for tracking down the game’s many, many businesses and intimidating them into paying me protection money. In order to get them to do so, you sometimes break mannequins, you clog toilets, or even take out rival gangs you weren’t aware had already claimed the same spot.

Where AAA studio games often throw time-wasters at you to extend playtime, Vblank is content making sure you just have fun. Don’t care about the story, or maybe you’ve played it before? Hold down a button to fast forward. Managing your criminal white-collar empire? No need to filter through tons of loading screens and menus, Shakedown Hawaii takes care of it all in the background, and you can track as much or as little as you want via the main map. There’s no day-one DLC, no loot boxes, no add-ons at all. Just give Vblank $20, and they’ll give you 20 hours or more of rock solid entertainment.

If only it always worked that way.

This game was given to us by the developer in order to prepare this review.

Tags: nintendo, review, shakedown hawaii, switch
Summary
Shakedown Hawaii one-ups Retro City Rampage in almost every way, and is most certainly a must-play on the Nintendo Switch. Heck, it's a must-play on every system, because Vblank made sure to put it on just about everything. If you like things that are fun, you're not going to have much bad to say about this one. It would have been nice to pick from a man or a woman main character, but that's about the largest complaint I can levy. Go get this game.
Good
Bad
8.5
Great

The rise of the videogame auteur is something to behold. There are high profile names like Hideo Kojima, but few games have the distinction of being made almost entirely by one person. To wit, only two immediately come to mind: Matt Thorson...
0
Average User Rating
0 votes
Have Your Say!
Your Rating: 0
Submit
Write A Review