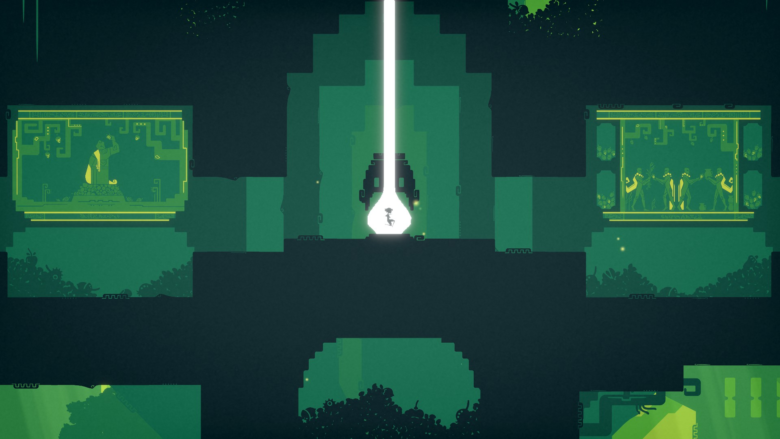 Flight. Something I’m sure all of us has dreamed of at one time of our life or another and is seen as a fantastical stepping stone into unrestrained freedom. Welcome to a world deep in the jungle wherein a youth who has also dreamt of flying is about to realize that dream in a momentum-based platformer created by Serenity Forge called The King’s Bird, a game that gives you wings and an excellent engine for a momentous journey. This is our review of The King’s Bird.

Serenity Forge introduces us into a world of thing, nearly impassible jungles that surround a thriving and populous city that appears to resemble that of an ancient Aztec society, or something very similar. But I am getting ahead of myself. The introduction of the game is a peek into the dreams of the youth in which they are flying unfettered by boundaries or obstacles. This is where you will find the only text I encountered throughout the game as the youth’s narration of their dream is given a few sentences in which they explain that even in their dreams they are eventually encompassed or inhibited by a cage. 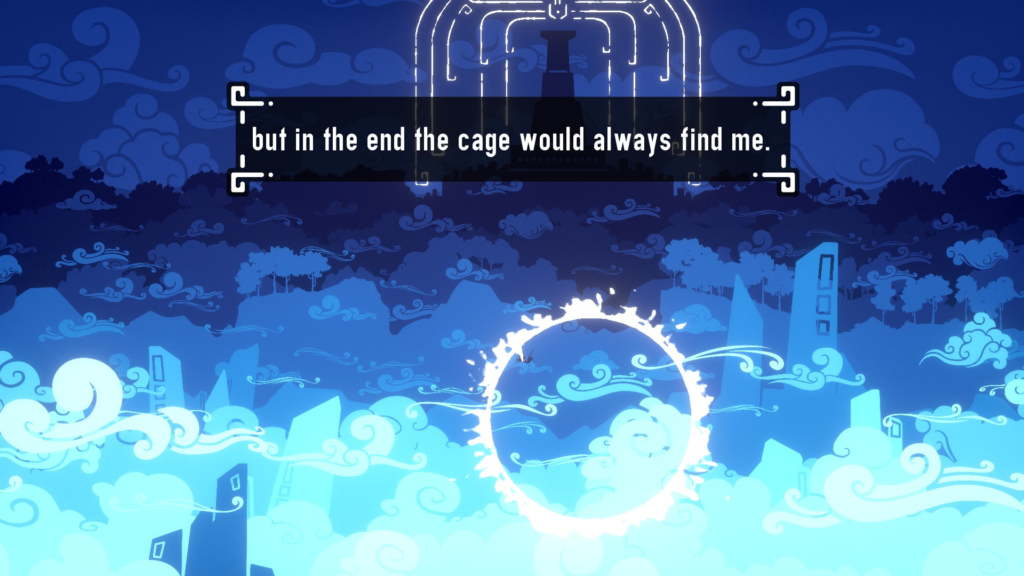 After the intro sequence, the youth awakens in his bed, firmly grounded (by gravity, not his parents) in one of the towers of a large populous city. Don’t get too attached to “home”, though. Time spent in the city is incredibly brief and used mostly as a training area to teach basic movements. Eventually, the youth finds their way into a temple where a wordless sequence plays out and leaves the youth to rebelliously explore the temple. Therein they accidentally acquire the ability to glide with smoke smoky trails of minute propulsion?  Shortly after, the youth will find their way into a general hub that offers teleports to various area hubs consisting of teleports to actual challenge levels (lots of teleport pads here).

Each area attempts to follow the theme of its title, though for the most part, the differences were minimal, relying heavily on accompanying music and background coloring to portray variety. Despite being deep in a jungle, I did not encounter any adversaries or monsters to overcome. In fact, the only real adversaries are gravity, some kind of thorny bush, and the challenge of mastering finite and precise maneuvering.

Most of the area portals are locked until a certain amount of other levels are completed. The required amount is signified on each area portal by the number of slots on it; each slot lighting up as you complete another level until you have reached the requirement and the requirement slots are removed allowing access to the new area hub.. Within each area-hub are four challenge levels which are depicted on the portal as well. Some of the later area portals will have slots represented by different icons. In these areas, different mechanics are used. In one, rather than flying/gliding the smoke trail becomes a force barrier and you are left with regular, non-gliding maneuvers to progress through the obstacles. 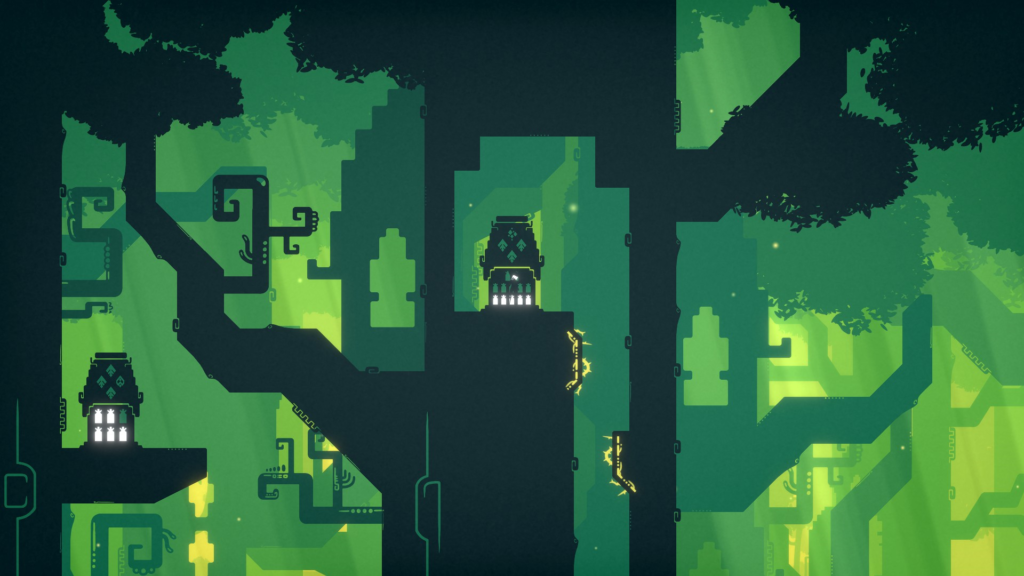 Let’s go back to the “challenging” part because it very much is. As a momentum based, side-scrolling platform the game plays very well and the challenge lies in the usage of these dynamics to work through various obstacles. As the character is merely gliding, there are many instances in which gravity must be used to obtain speed in order to complete whatever loops and other fancy stunts might be required to pass each obstacle. Many-a-time did I find myself diving hazardously close to what I can only assume is swamp, or moat of some sort in order to gather enough speed to fly up and around and through.

The real challenge, however, is in the minutia of the required movements. In many of the challenges and obstacles, precision is key while simultaneously frustratingly hard to achieve. Now, I’m no precision player, by any means, but the level of accuracy required on some of these challenges goes beyond any intentional effort I’m able to produce. Instead, I found myself relying heavily on luck.

Enter my 13-year-old daughter. After relentlessly frustrating myself on some of the very difficult obstacles, she was happy to step in and show me how it was done. And did she ever. Especially considering she had never played this type of game before, I was more than impressed. Perhaps it is the adaptability of the young or just the fact that I am too old to easily grasp the mechanics, but within minutes of watching her play, not to mention pulling off maneuvers that I hadn’t even realized were possible, the magic of the game was renewed in my mind. Not that she didn’t have her moments of struggle, but the amount of time she spent on a problem was much less than I would have. So if you find yourself having too much difficulty with the demands of the game, look to the children. 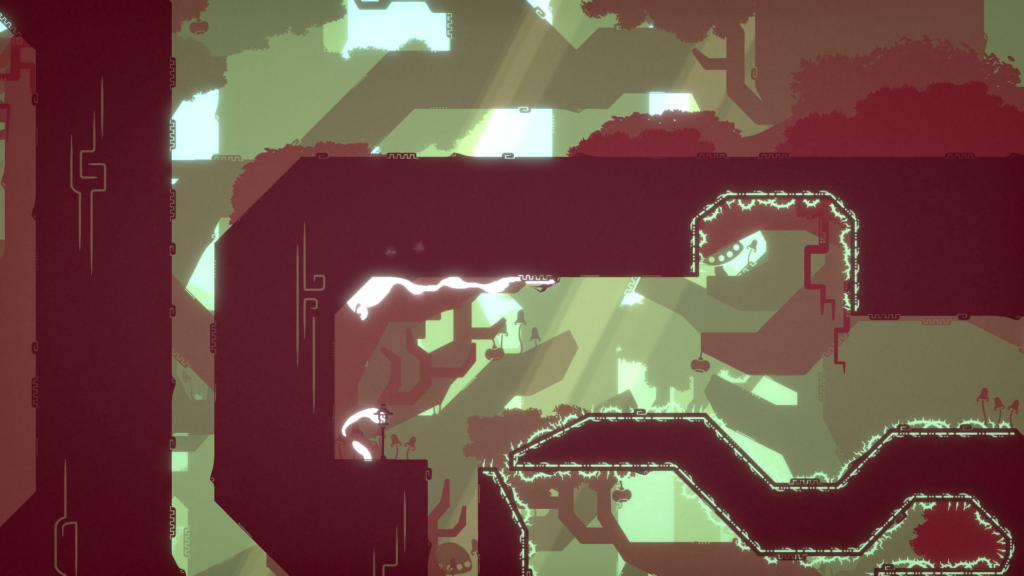 Despite the seemingly simplistic setup of the platform, the game has its beauty in both the background art and the music that accompanies you on your adventure. The artistic game rendering is at once awesome and endearing. Simplistic and highly impressionistic with a strong influence of perhaps some ancient tribal styles. The backgrounds are where the true focus of the art as the world is brought to life with multicolored and multi-leveled silhouettes that change from stage to stage accommodate the new areas you explore. The music is lively and continuous and the player is awarded a new type of music with each level they visit. Now, the continuous nature of the music can get a bit – irksome.

But honestly, I found myself surprised at how long it took for me to get tired of it. For the beginning levels (usually), you’ll be finished and moving on to the next before you’re even aware that it’s starting to wear on you. A little later on, however, you might find yourself teetering on the edge of madness regarding it. Granted, if you are listening to anyone musical passage for that long, you’ll already be half-mad from being stuck on one obstacle or the other.

Note: Our copy was reviewed on (PC/Steam) with a code provided by PR.

Tags: pc, review, the king's bird
Summary
I rather enjoyed The King's Bird. There is definitely a magic to it and a draw that I found compelling, and found it was just as enjoyable to watch as to play as you find yourself drawn into the actions and struggles of whoever is playing, sharing in the “oohs” and “ahs” as they come oh so close or pull off an unexpectedly complex maneuver.  Taking turns as a family has turned out to be a very enjoyable family activity.
Good
Bad
8
Great

Written by
Sythrael
A veteran gamer and story-hunter with a derivative digital-action addiction who endeavors to slake his hunger with every idle moment he can find… unless his kids are home. Then he’s just Dad.
Previous ArticleGamescom Jump Force Developer InterviewNext ArticlePlanet Alpha Review