One thing to know about Valkyria Revolution is there are a lot of cutscenes and sometimes it is going to feel like most of the game is cutscenes, especially early on. I’m not the sort of player who doesn’t care about story in video games. The story is often one of the aspects I care about the most in a game. Normally I enjoy cutscenes but there were more than a few times where I found myself getting a bit bored with them because there are a lot and they often chain together. With that said, watching these scenes is important to understanding what is going on in the game and none of them are superfluous. So, my recommendation would be to not skip them.

One of the reasons I had a hard time with a number of cutscenes is because I had a really difficult time caring about any of the characters, which is also uncharacteristic for me. There’s a lot of mystery surrounding all five of the main characters because the format is the telling of a “True Story” about historical figures being told to a student. This is necessary because if too much had been revealed at the beginning the story would have lost a lot of its intrigue, but it did result in me not feeling any real attachment to the characters until I was more than a few chapters into the game. 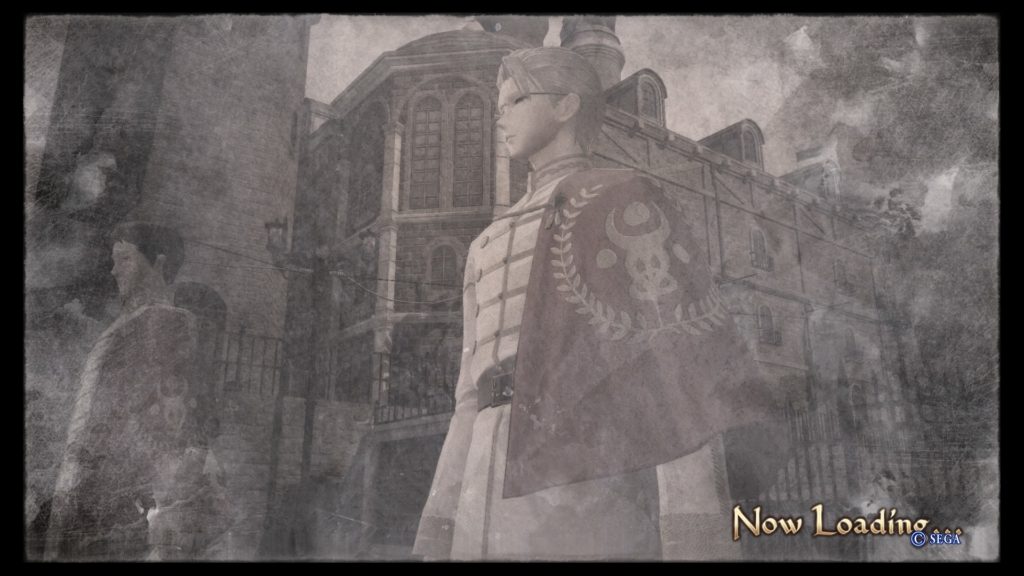 As the game progresses the story is chronicled in the Archives of the Revolution (History Book) which functions like a codex except you can rewatch important cutscenes rather than read about them. Additional information is also added which you won’t see unless you periodically look in the book. Some of these extra bits are in the form of notes made by the student about events which you’ve seen. However, what is far more interesting are extra cutscenes which you don’t have to watch but they provide a lot more information about all the characters. I know I just finished talking about how many cutscenes there are and how it could get a bit long in the tooth, but these extra scenes were quite interesting and I don’t regret watching them at all.

As the name implies there’s a revolution on and it forms the core of everything which transpires during the game. One of the more interesting aspects of Valkyria Revolution is the public sentiment towards the war matters and changes depending on the outcome of missions which are undertaken. You get a feel for this is by wandering the promenade and talking to the various townsfolk there and can also stop by the newsstand and check out the headlines.

The majority of the game revolves around sending your squads out on missions and how they turn out. For most of the missions, there is total freedom for who goes on the mission though some do have certain characters who are required to be there and will be denoted as “on duty”. It is worth noting however that even if someone doesn’t go on a mission they will still get some experience at the end, it’s not as much as the characters who do the mission but it is enough to help mitigate the level difference between characters who are used more often. It’s also a good idea to vary who is used on the small missions because there are some missions which will require everyone to go. 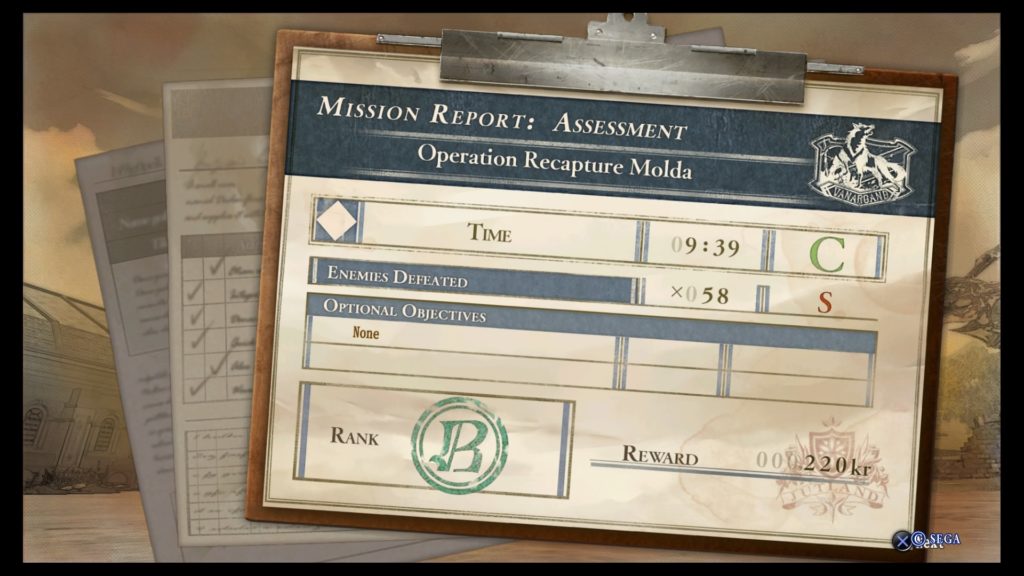 Combat is pretty straightforward and not too difficult to get the hang of. You can switch between controlling any of the four characters in the squad and they all have an action gauge which when it’s filled can be used to do various types of attacks, use alchemy, cast heals, or use items. Each character has their own special set of skills and what sort of combat they excel at and learning to make the best use of these is really where the tactical and skill side of the game comes into play. There are multiple characters that focus in each area so being able to make multiple balanced squads isn’t an issue.

The difficulty of combat in the missions varies widely even within the same mission. For example, there is a hard mission early one where for most of the mission I could just face smashing my way through everything without any issue. However, when I got to the last boss he’s suddenly quite difficult. The first mission where I faced the Reaper is also a good example of a mission’s difficulty varying widely for no apparent reason. The first time I fought her I had no issue and didn’t need to really pay attention to the mechanics at all. However, after the rest of the squad joined me the fight got incredibly difficult and it was a challenge just to keep everyone alive. These swings in difficulty can be really disconcerting and were quite frustrating. 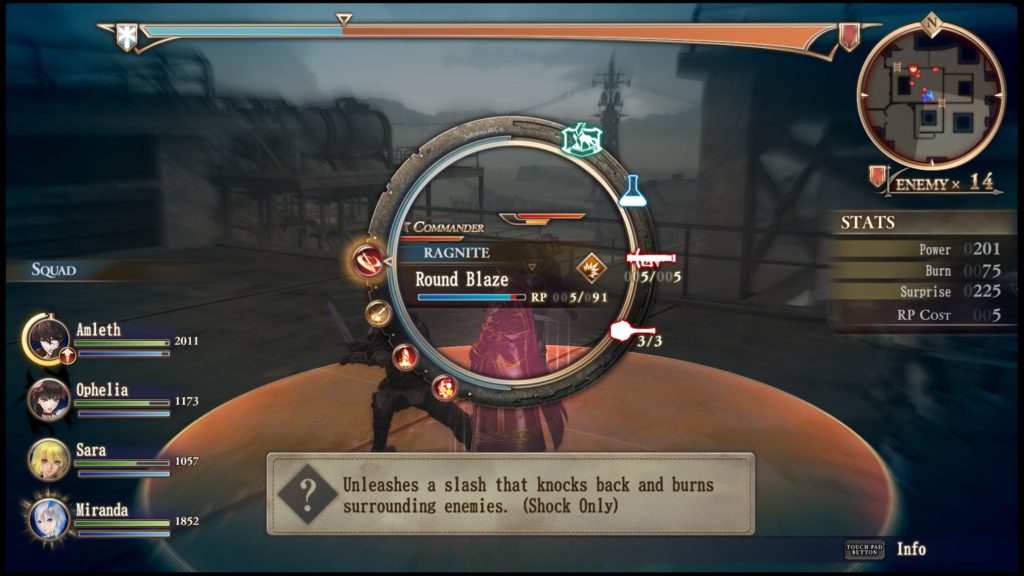 In addition to using the various action abilities, I also had the ability to block and dodge attacks with no penalty, which means I could do these things at any point during combat as much as I wanted to. However, I mostly found the block to be pointless. When I would block my character would move more slowly and really didn’t offer many benefits over dodging.  With dodging, I could make attacks completely miss me and at the same time get into an optimal position for an attack (i.e. behind an enemy).

Overall Valkyria Revolution is an interesting and fun game, but it does take a while to really get going. The introduction and early chapters are really the low points of the game so if you can make it through those you should be good. I had no real issues with anything in terms of anything not working correctly or performing badly. There are however a lot of loading screens and they can sometimes feel like they take forever, but none were very long. For anyone who enjoys action RPGs with a heavy focus on storytelling, this game will be a winner.

Note: Our Valkyria Revolution review was performed on the PS4 with a code provided by SEGA PR.

Valkyria Revolution is an action RPG and is related to the Valkyria Chronicles but tells a very different story. The main story is about a group of people who are known as the Traitors and this is their story. It's a spin-off from the Valkyria Chronicles series, and is a mix of strategy and action combat RPG set in a rich war-torn setting.
3
Average User Rating
3 votes
Have Your Say!
Your Rating: 0
Submit
Write A Review
Genre:Action RPG, JRPG, RPG
Rating:Teen
Developed By:SEGA
Publisher:SEGA
Modes:Single-player
Series:Valkyria