Everybody has a story or two that they could share. Whether it’s a chance meeting, a feat of strength or whit, or that crazy relative/friend/neighbor that did a thing that you just have to hear! Much of the draw of these stories is in the way that a story is delivered. Much like a good comedy or interesting speeches, the delivery is paramount; it must be evocative of the thing that it is trying to present. So, when a video game introduces itself with words like Saga, Story, or Tale, I expect for the narrative to take center stage. This is our Mecho Tales review for the Nintendo Switch.

Initially released in 2009, Mecho Tales is a platformer with some twin-stick shooting mechanics. This week, it is being rre-releasedon the Nintendo Switch for $11.99 USD and I had a couple of days to give it a fair shake. So, here is what I can tell you:

The game begins with your first controllable character (we’ll get to that in a minute) stealing a small, floating robot from a nefarious group of, well, robots with plans to dominate the world. Apparently, this tiny floating bot contains schematics that could put an end to the “Mecho Wars”… but the game never really gets a chance to tell me what those even were. After extra research, I discovered that that Mecho Tales takes place within the world of Mecho Wars (PSP) – another game…. and this is where things go south*, rapidly. Before I get too harsh, I must take the advice of a mystical care-giver of old and apply some plant-based sweetener to balance out the bitter. 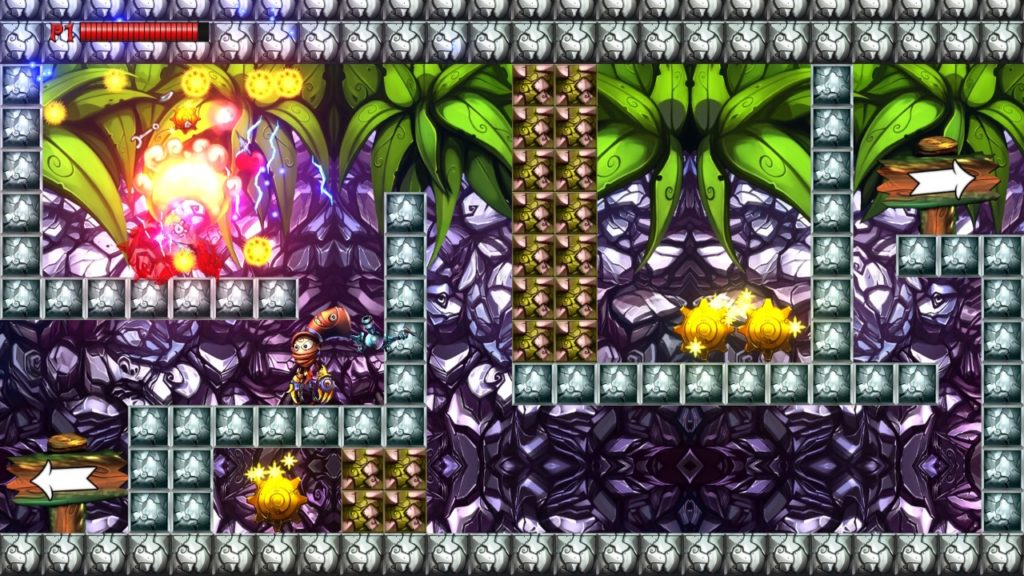 Mecho Tales is set against a vibrant landscape with some unique character designs. On their own, they are gorgeous. The best way that I can describe the art direction is if Tim Burton and Lisa Frank collaborated on a robo-steampunk world. It is a cornucopia of bright color, odd proportions, and lots of big eyes. It’s quirky and it works within the setting. This vibe is reinforced by a soundtrack that matches the whimsy. Another bonus is that there is the option to play with four players in local co-op.

While the art direction of the game makes it stand out, there is very little dimension between the art in the foreground and the background. This makes for a very busy screen and causes the platforming (one of the game’s main mechanics) to be exceptionally difficult during certain portions of the game.

Since we’re on the topic of platforming, I found an incredible inconsistency between where and how you could actually land on platforms. There were some platforms that I was clearly a block or two into the platform and my character just fell right through it. What makes this infuriating is that a game mechanic failure like this can send you to your death, which sends you to the beginning of the level. If you happened upon a checkpoint before your untimely death, it isn’t so bad. The levels are relatively short anyway.

I did mention in my description of Mecho Tales that it has some twin-stick shooter elements to it. This is where that heisted bot comes into play. Apparently, not only does the bot contain tech schematics and my recipe for Mac and Cheese (which has been known to resolve conflict… just kidding, no one has that recipe), the bot also serves as your weapon. This is controlled by the right thumb stick if you were using the Pro Controller as I was for testing.

As to collect sprockets from defeated enemies and from the levels themselves, you can purchase different weapon bots that can be cycled through. While the options to unlock new abilities gives a sense of progression, they were a bit lackluster – new attacks were more situational than bringing more damage to the table. This proved frustrating during boss battles, specifically. Since they had no health bars, it was hard to gauge if my bombs were more effective against them than, say, throwing a handful of raspberries. 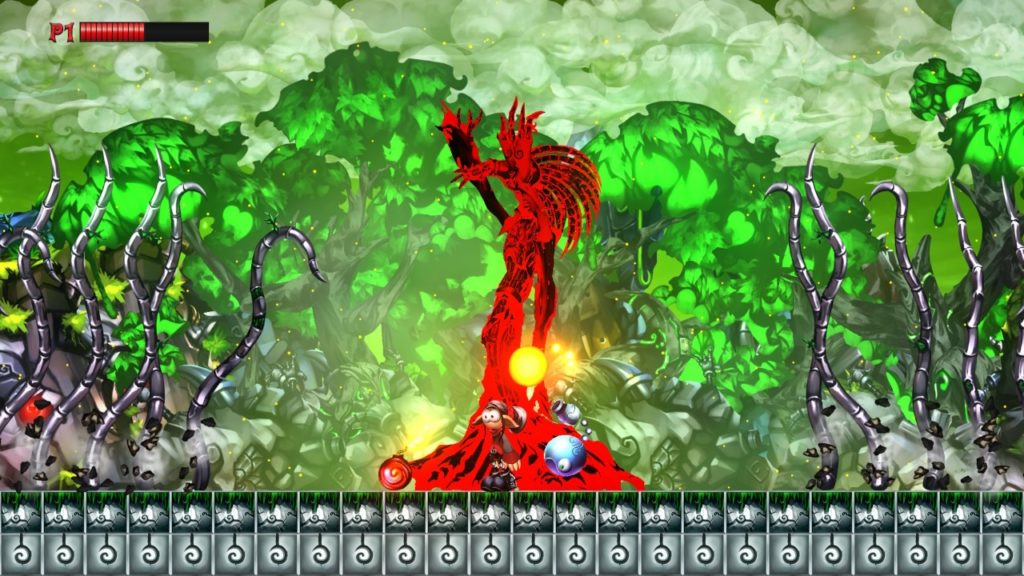 To be candid, I struggled to write this review for Mecho Tales because I can see the type of game that it wants to be: it wants to be an adventurous shoot to extend a game universe. Unfortunately, it falls incredibly short of that goal and settles for mediocre, at its very best. For a game that announces that it has multiple stories to tell… there isn’t much of a story to begin with. What story we do get isn’t developed before characters are swapped out, leaving players wondering what it is we are actually experiencing outside of an explosion of colors.

While there are different level environments, they get lost in the layers and the formula. That formula begin: go to level 1, beat level 1, move onto level 2, fight a boss, and move onto the next zone. I can’t say that Mecho Tales is too simple of a game because there were challenging platforming moments, but I can’t call it complex either because everything about it feels overplayed and repetitive. The soundtrack gets old a few levels in and bosses are easily exploited.

The heartbreaking thing for me is this: everyone loves an underdog… the little guy who, against all odd, triumphs in an unexpected way. In their story, they beat the unbeatable and overcome the insurmountable. They take the state championship, they get the girl, and/or they _____ (fill in your own hanky-waving achievement here).

I think that this is why we cheer on indie titles in the world of gaming. There is something heartwarming about “the little team that could” in a market of AAA behemoths. I have had some incredible experiences with indie titles – both incredibly good and incredibly awful. 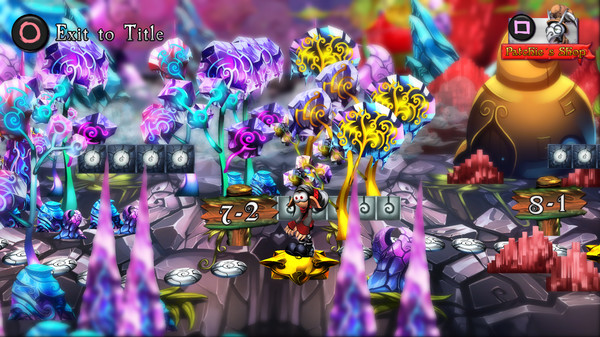 Frankly, Mecho Tales breaks my heart because I want to see more creative talent and this team has so much promise in their character designs. While Mecho Tales is not an entirely broken game, it is a game that doesn’t quite seem to know what it wants to be.

*My apologies to the South if I gave you a bad name by comparing you to Mecho Tales. I love your fried chicken and sweet tea. 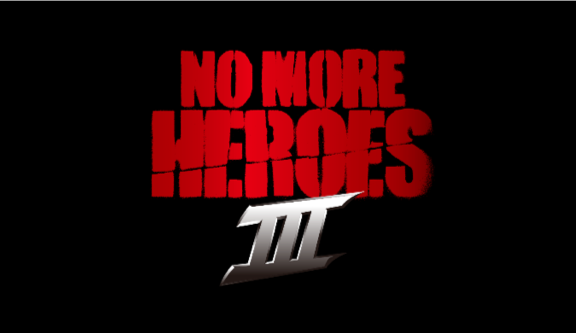 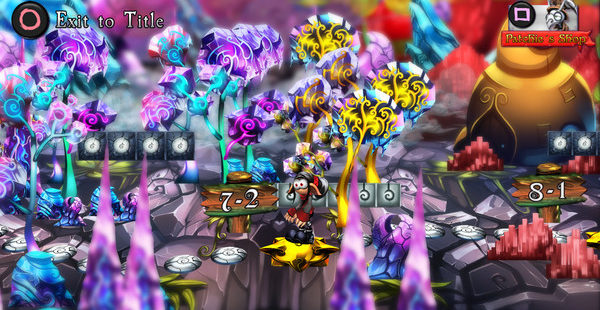 An all-new adventure in the world of Mecho Wars! Run and shoot through chaotic platforming levels filled with spikes, bottomless pits and an army of deadly robots. Go it alone or team up with your friends in 4-player local multiplayer. Directed by Luc Bernard.
0
Average User Rating
0 votes
Have Your Say!
Your Rating: 0
Submit
Write A Review
Genre:Action, Indie, Platformer, Side-scrolling
Rating:Everyone
Developed By:Arcade Distillery
Publisher:Arcade Distillery
Modes:Single-player