Welcome back to Elite Lord of Alliance (ELOA) Everyone!  Ehheem, I mean, Warlords Awakening.  Some of you may have heard about this game, some may not, so let me summarize it very quickly before we go into the review.  Warlords of Awakening is just a rename of an older game called Elite Lord of Alliance.  This was developed by NPICSOFT and actually launched and failed twice.  This is the third iteration of the game to date, but don’t stop reading yet, maybe it’s changed? Did the new publishers make a difference?  Is it P2W? 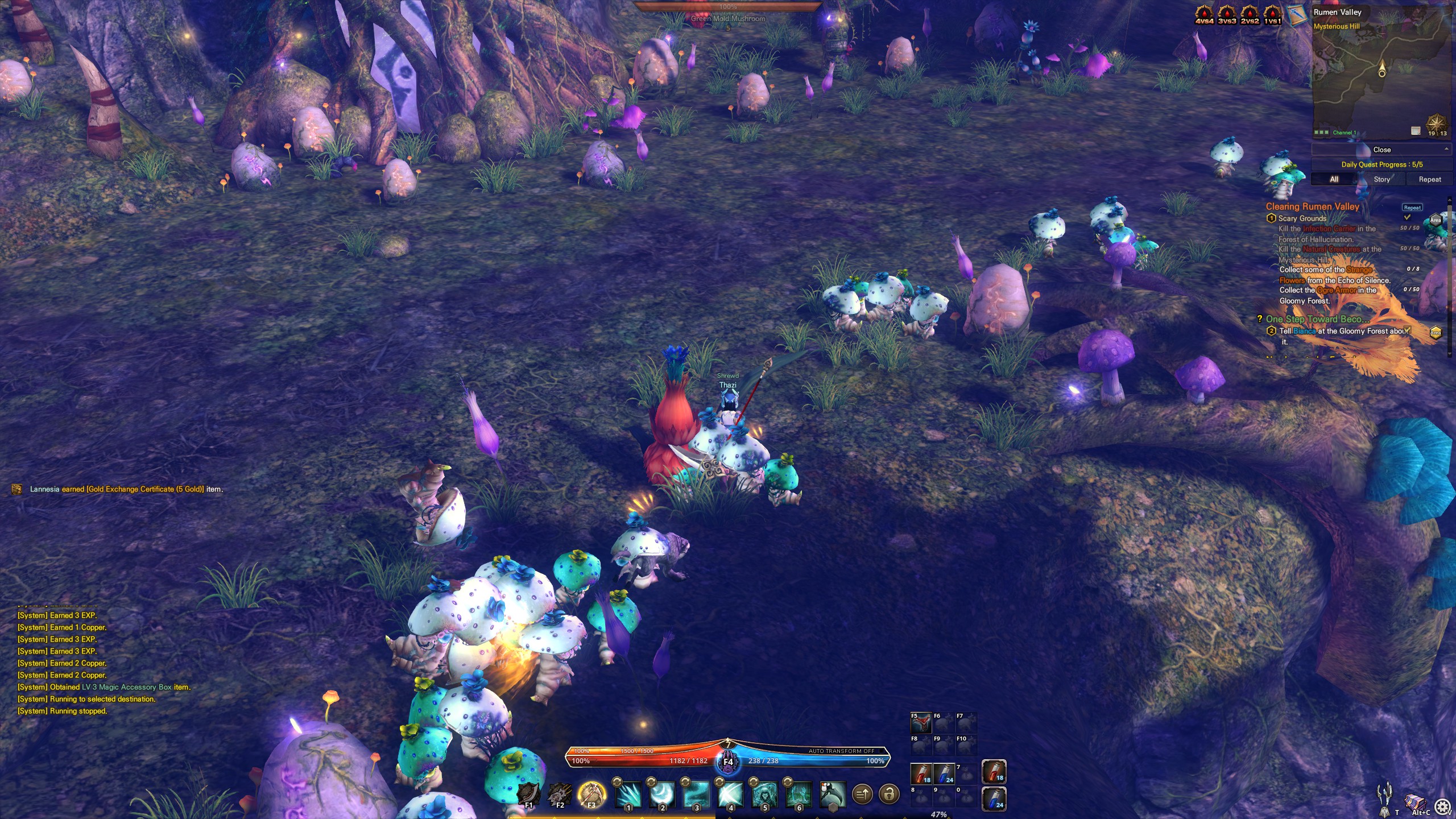 Marketed as a “remastered” MMORPG, Warlords Awakening takes you back into the world  of chaos with the ultimate goal of you becoming an Elite Lord!  The game is very anime inspired, which can be a plus or a huge turnoff to some people.  It’s also an isometric type game, much like Diablo 3.  No, you cannot jump (I tried a dozen times), but at least you have mounts!  It is a hack’n’slash meat grinder of a game.  You’ve got quests, but these quests tell you to go kill 50 of x monster, so you go out and absolutely murder them.  Complete with flashy skills and awesome looking combat, at first glance you’d think it’s a fairly decent game.  Then you realize how much of a grind it really is and get really disappointed. 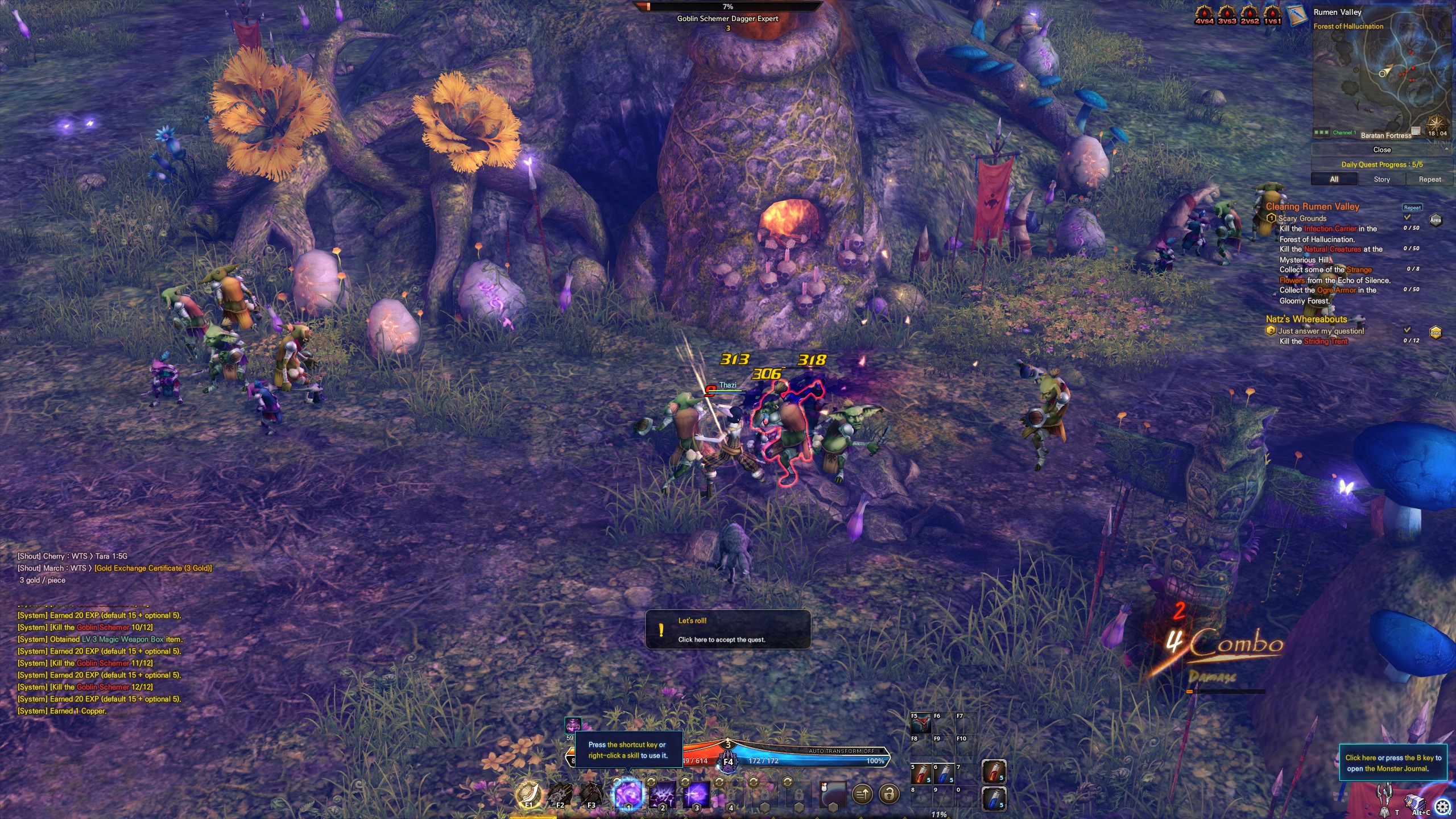 Let’s start with combat.  It’s fluid and actually fun.  The controls are somewhat different, and I had to re-map default attack buttons just to use WSAD to move around.  No, WSAD is not the default movement buttons, they expect you to use your mouse.  You have multiple weapon sets for your character, each with its own skill tree associated with it.  Yes, your weapons have a skill tree.  This means when you level up and get points, you’ve really got to think about what weapon you want to use in the long run, not just right now.  I started an Assassin, so I had the choice of using a Scythe, which I did, it was amazing btw.  Lots of AOE damage, lots of big numbers, flashy graphics, it was bliss.  Until I had to do the same thing over and over and over again.  I did not enjoy going and destroying 50 wolves, only to go turn the quest in and being asked to go do it again. 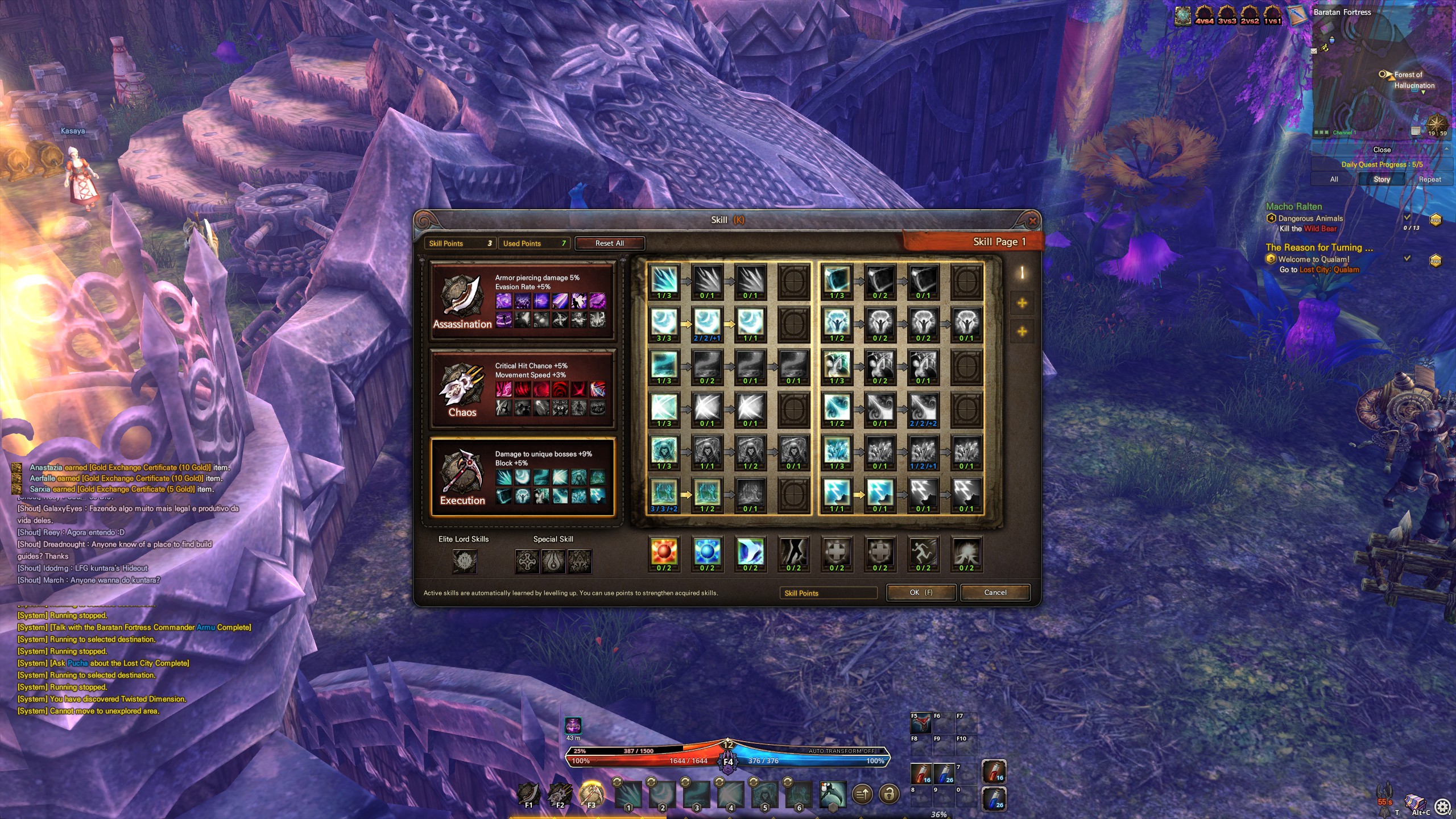 Graphics are okay, they are a far cry from what I’d call modern quality, but it’s not bad.  It’s heavily inspired by anime, which again can be either a plus or a huge turn off to some players.  The music is so-so, I typically didn’t enjoy it so I muted it almost immediately.  The translations are okay, I really didn’t notice anything that really stood out.  The quests suck.  I’m not a huge fan of go here and kill 50 mobs to only turn it in and rinse/repeat.  I literally had a quest take me to kill 50 of three different mobs, turn it in, and go back to kill them again, 3 times.  I ended up with like 150 kills of each mob before I was finished.  Its fine if you like that kind of mindless grinding.  It’s not if you want to actually do other stuff. 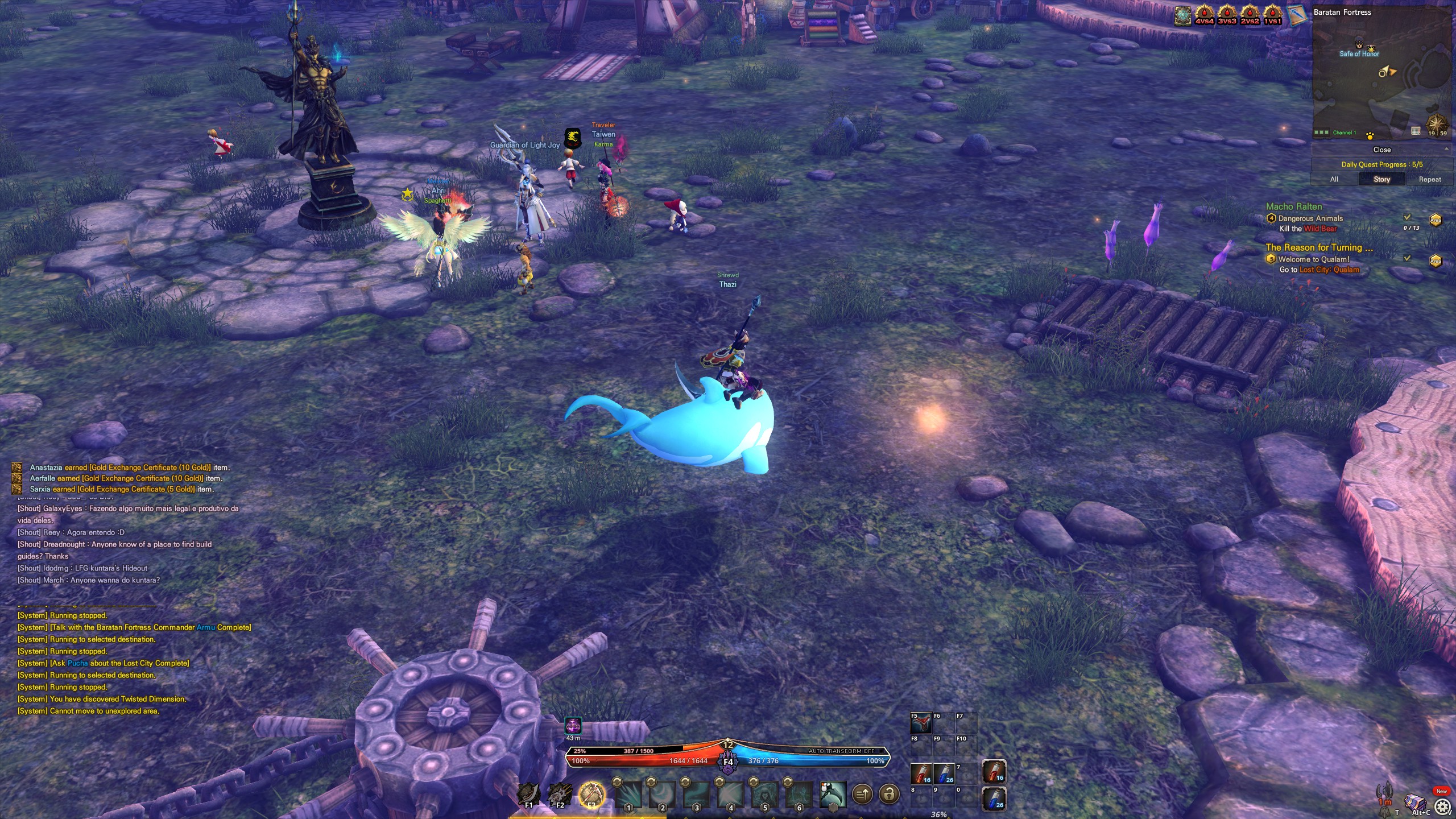 Money grind is real.  To start a guild you need 30 silver.  I think I’ve gotten maybe 2.8 silver total between level 1 and 18.   Not a lot really.  But consider this, your inventory space is very limited starting out.  While it’s not a cash shop item (that I could find) the first increase costs 1 gold.  That is an absolute substantial amount of money and game time investment to obtain.

Cash shop, oh boy.  Okay so the cash shop isn’t extremely pay to win.  Some would even consider it not pay to win, it really depends on whether or not you think instant revive potions, or + experience bonus potions are P2W or not.  Most of it’s all cosmetics.  You’ve got the exp potions and the revive potions, but you’ve got things like skill reset, appearance reset, etc.  Which can be upsetting as I am unsure if you can even reset your skills without purchasing it from the cash shop. 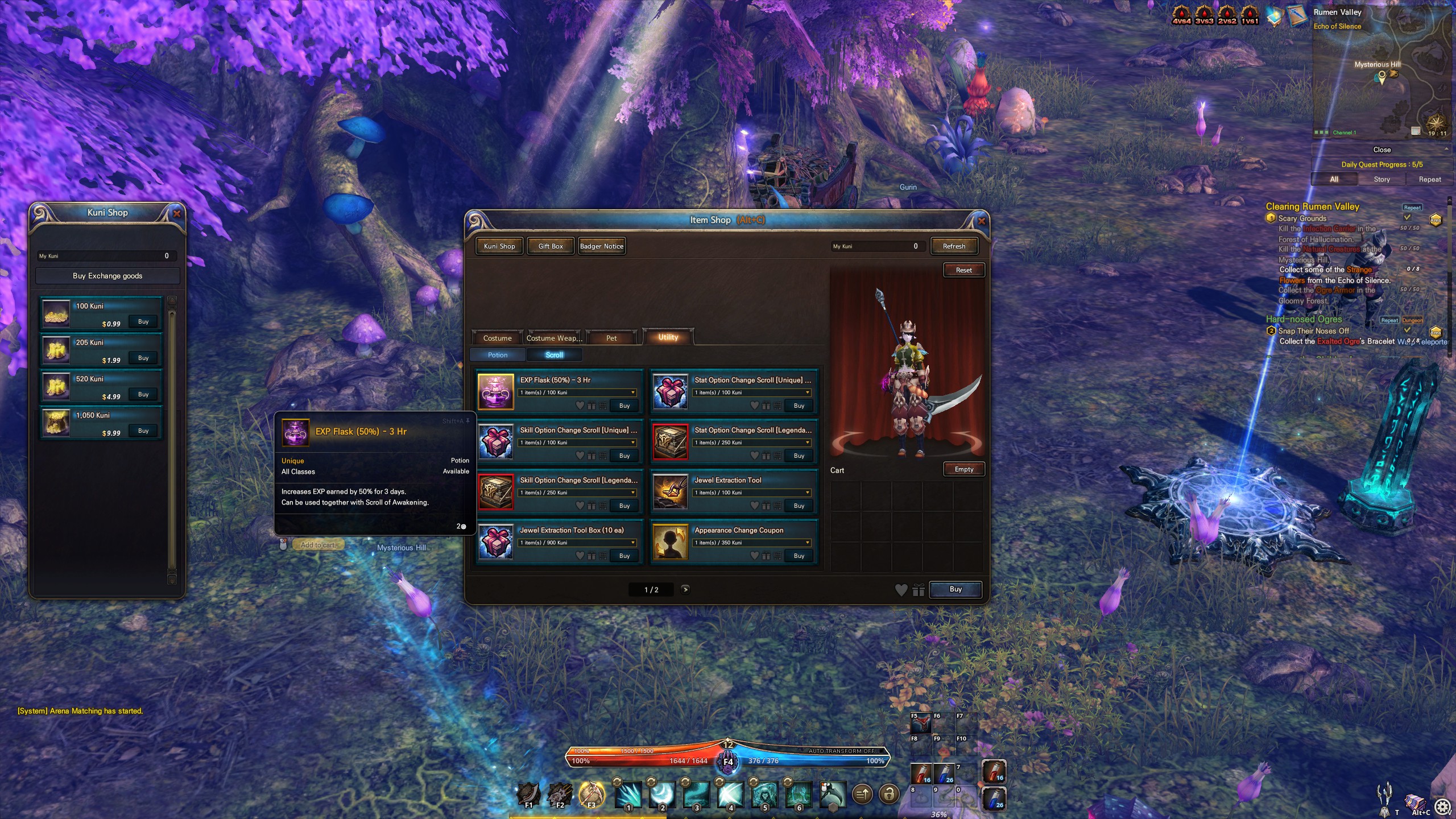 Overall, the game is just okay.  It’s not some amazing game, and it’s not trash either.  It’s not something I would say I will continue to play either.  I may hop in every now and then just to smash some mobs up, but it’s really not my cup of tea.  If they were hoping to restart the game, they might be onto something.  They didn’t (in my opinion) make the game P2W with the cash shop, and genuinely seem to care about the success.  I just think the game had it’s time and it wasn’t “remastered” enough to make much of a difference.  If you like these types of games, I can seriously see you putting in a lot of time into it.  If you hate mundane tasks and repetitive quests, you might as well avoid it from the get go.  Is it worth the $11.99 price tag?  That’s for you to decide.  Me personally?  Not really.

Warlords Awakening is available now on Steam for $11.99

Tags: Hack'n'slash, MMORPG, online, pc, steam, Warlords Awakening
Summary
Warlords Awakening will appeal to a lot of people. The game isn't bad at all, it's just the repetitive nature of the game I dislike. If not for that, I could see myself playing it simply for the awesome combat offered. Be prepared, however, for a major grind!
Good
Bad
5
Average

Welcome back to Elite Lord of Alliance (ELOA) Everyone!  Ehheem, I mean, Warlords Awakening.  Some of you may have heard about this game, some may not, so let me summarize it very quickly before we go into the review.  Warlords of Awakening...
0
Average User Rating
0 votes
Have Your Say!
Your Rating: 0
Submit
Write A Review