Zombie Nazis, that sentence alone is enough to pique my interest. The prospect of taking them on in a 3rd person shooter based on mechanics from the Sniper Elite series and I can bring my friends?! Sign me up! This is our Zombie Army 4: Dead War review for PC.

I should preface this by pointing out that this is my first time in the world of Zombie Army. There is, in fact, an entire trilogy to play through that I am very tempted to do now that I’ve completed this one, so if you’re wondering how this one compares to what’s come before I’m afraid I can’t help you there. I can tell you though that this game is a whole lot of fun!

Let’s get one thing out of the way straight off the bat, you aren’t playing this for the story. While there is a story that plays out as you blow zombie brains to bits if you’re so interested but as someone who usually really enjoys the narrative of games. I’ll be the first to admit I lost track of the story multiple times, usually due to the fact I was obsessed with keeping my kill combo going.

For you see it isn’t just a case of returning the undead back to their graves, you have to do it in style! As you rack up kills you’ll start to earn points and points means prizes! The more zombies you purge from existence in quick succession the higher your combo and once you start to get into the flow of combat it can be quite intoxicating. Combining long-range sniping into small arms fire and following up with melee attacks while ensuring you never miss a shot is easily the best part of the gameplay loop. I’ve seen a lot of people compare this game to Left 4 Dead but in all honesty, I didn’t get that kind of feel from it. 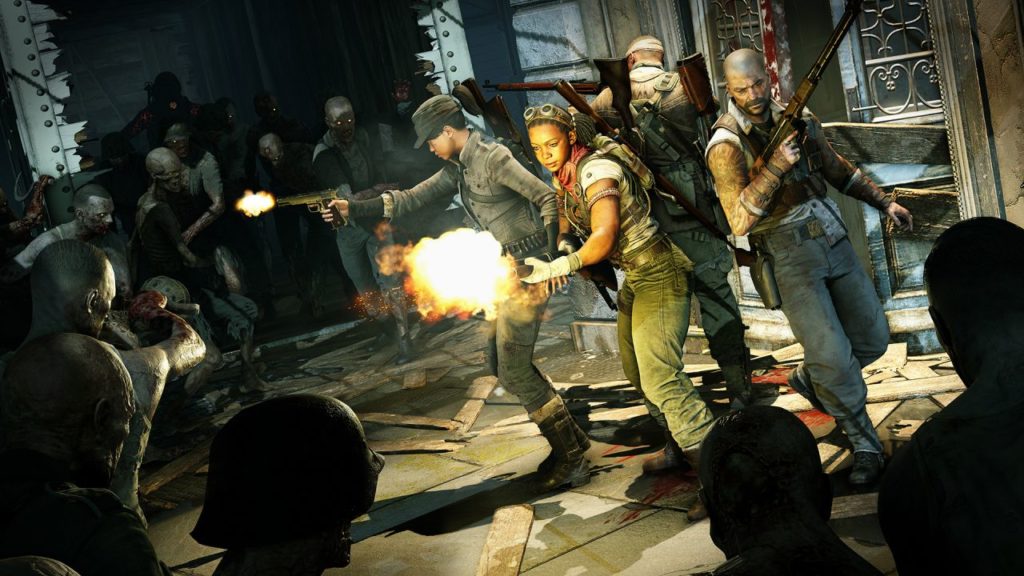 While there are special Zombies that double as boss encounters on occasion and there are safe rooms that move you from one zone to another where you can upgrade your weapons and customize your loadout and character, the actual moment to moment gameplay invokes a totally different atmosphere. Especially in multiplayer, where at least for my brother and me, it became a competition to see who could chain together kills most effectively and get the highest combo rating. The more creative you are with your kills earns you more points and if you perform an especially skilled kill you may get rewarded with a slow-motion bullet cam shot ala Sniper Elite.

Now that’s not to say this game isn’t a challenge, enemies have quite a few ways to make your life miserable and not all of them simply shuffle towards you waiting to be disintegrated spectacularly. The suicide zombies, for example, are an absolute priority to take out before they get close, as you have no dodge mechanic being surrounded or pinned in by enemies is not an ideal situation unless you’re armed with a shotgun or have a melee/execution attack to hand. As an added bonus the suiciders possess a bone-chilling scream that will not only alert you to their rapidly approaching presence but also give you nightmares. 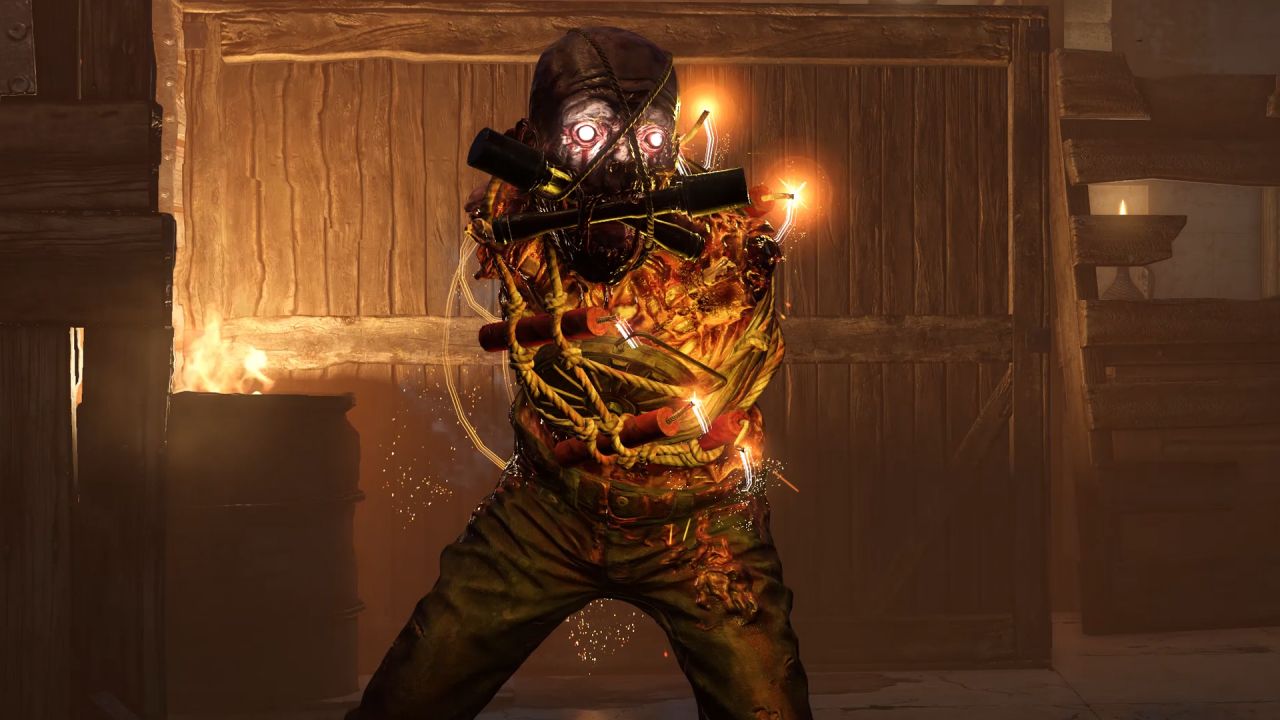 You will learn to fear them

For those wondering what an execution move is, it’s essentially a “free” kill move that can be performed at melee range and restores a small amount of your health (there is no passive health regeneration) but requires a bar to be filled in order to perform the move. Careful use of this ability can turn the tide of battle as heavily armored enemies or sub-bosses can be felled with this ability with experience.

You can often find temporary boosts in the field to make your life a bit easier, self-explanatory explosive rounds or a divine boost that heals while dealing damage are just some of the goodies you can find in boxes hidden throughout the environment. Exploration can sometimes pay off! If you don’t want to explore though you could always take the flamethrowers or heavy machine guns that some of the sub-boss zombies drop upon defeat and turn them upon the unsuspecting horde of shuffling doom. 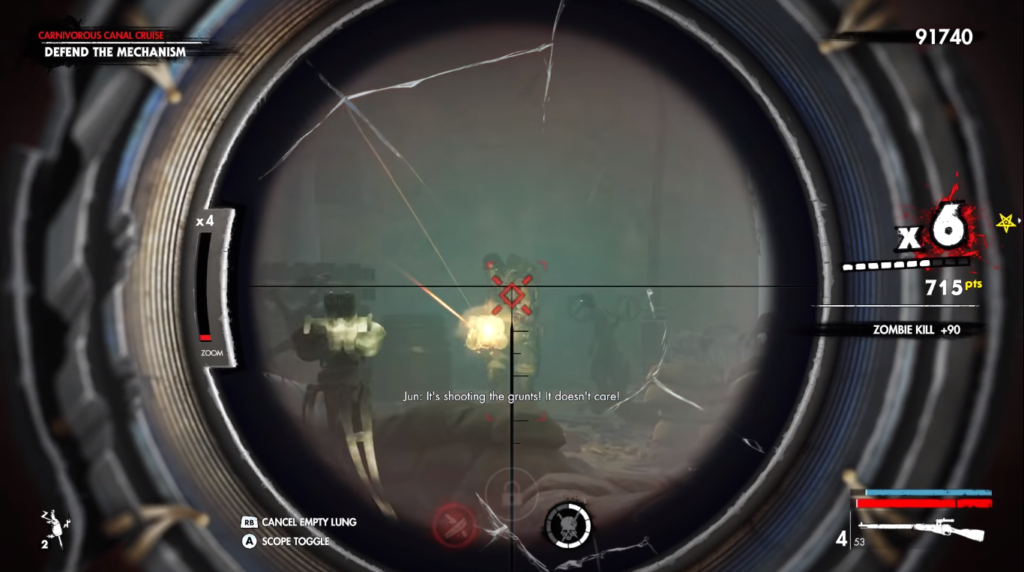 Upgrading your weapons is also a big part of the game and as you move from mission to mission you can use the workbench located in safe rooms to bolt on additional firepower or swap out your weapons if you don’t like them. Permanently gaining electric damage that can stun or a vampiric scope that gives back health on critical kills can make dispatching the dammed a lot easier.

You also gain access to perks that give can be swapped out in safe rooms to somewhat customize your playstyle, my brother picked a perk that allowed him to rip machine guns off their emplacements and utilize them like the heavy machine guns you find from enemies. While I had extra melee resistance that meant I could afford to get more up close and personal to enjoy those sweet melee animations more often without as much risk. There is a lot of offer with perks and upgrades, some of which can only be unlocked at high levels encouraging more than one playthrough. 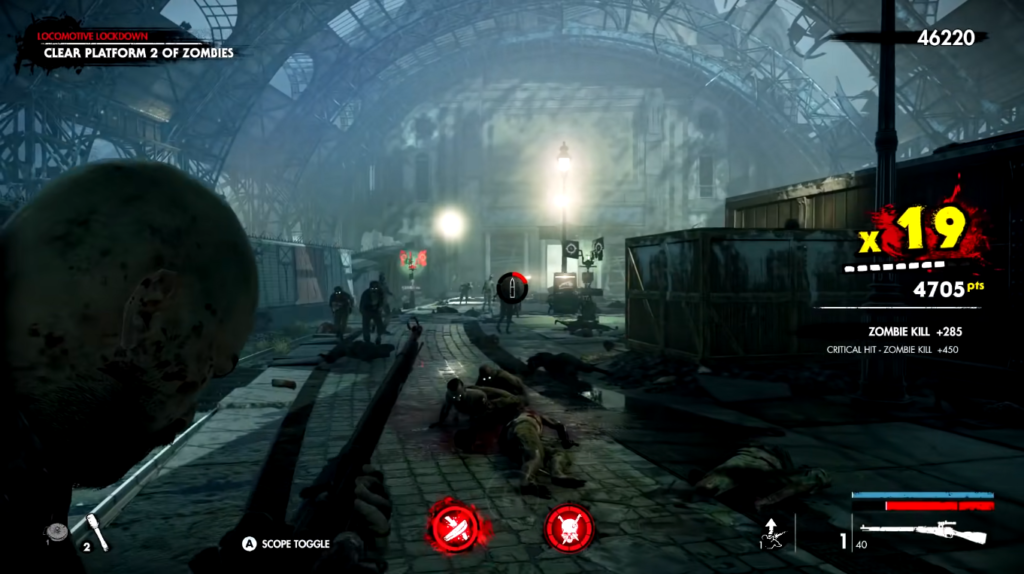 Eventually, though, the story will come to a close with a few excellent set pieces that I won’t spoil here but I must admit the final boss did disappoint me a little bit. Considering all the buildup I expected it to be a much tougher fight than it actually was.

However! For those completionists out there every level has a ridiculous amount of stuff to find which means you are unlikely to have 100% finished the campaign. Comic books, artwork, lore pieces and my personal favorite, Zombie Hands! Which can be the most elusive of the bunch, often hiding in difficult to spot or reach locations performing all manner of strange and comical activities. Such as walking a tight rope like they are practicing for the circus! 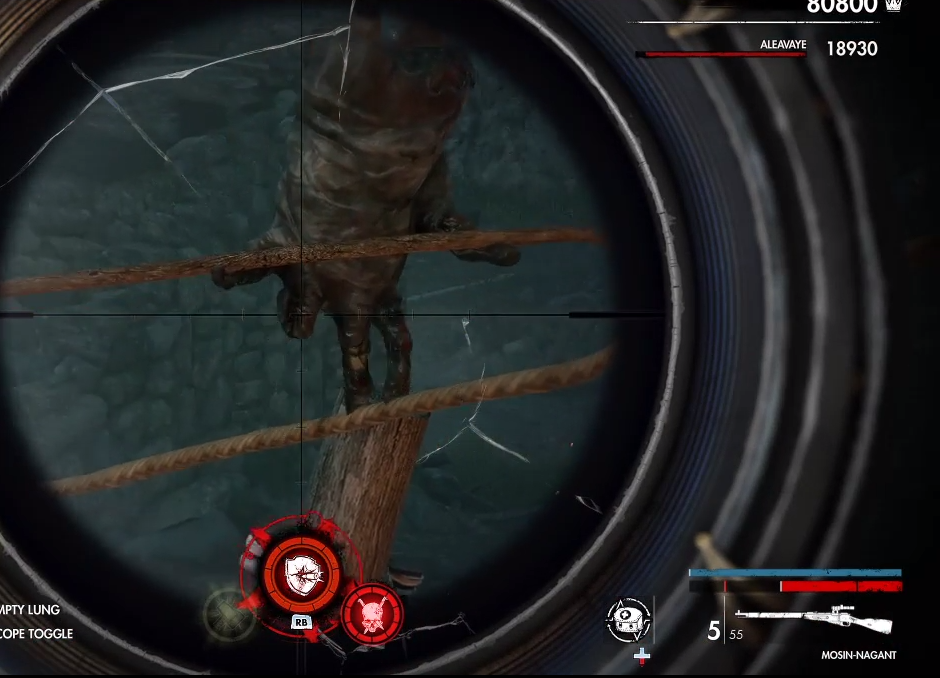 The fun doesn’t end with the story though as the game also features a Horde mode! You get pretty much what you expect here and while I have nothing bad to say about the mode itself I will say that even on the hardest difficulty it didn’t take us too long to work out winning strategies and complete all levels this mode has to offer. While I did appreciate that we couldn’t take in a custom loadout and had to find new weapons on the fly while in the thick of the action, it didn’t really feel too different to the campaign missions.

Overall though I enjoyed my time in Zombie Army 4: Dead War and I personally feel it’s a highly enjoyable experience that reminds me of a bygone era. Where 3rd person shooters were more common and not every game had to be a massive open world with a thousand things to do or a cinematic story. While there is the occasional horror moment that may make you jump, for the most part, I’d describe this as arcade-like fun that is easy to pick up and enjoy. Grab some friends and see who’s the best shot among you.

A game key for PC was provided for the purpose of review.

Tags: pc, review, Zombie Army 4 Dead War
Summary
A solid package that will keep you entertained for many hours. While I personally would have preferred to have the difficulty rise a bit more than it did I never felt like I was simply drifting through the game. While it is nice that there are different playable characters I never mentioned it as it makes zero difference to the gameplay or story. They are all essentially the same. The myriad of collectables though meant that we were often searching high and low for what was in the level and exploration was always enjoyable, finding boosts and rooms we could have easily missed. I encountered no real bugs on my playthrough and that alone is worthy of praise in this day and age.
Good
Bad
8
Great

Zombie Nazis, that sentence alone is enough to pique my interest. The prospect of taking them on in a 3rd person shooter based on mechanics from the Sniper Elite series and I can bring my friends?! Sign me up! This is our Zombie Army 4: Dea...
0
Average User Rating
0 votes
Have Your Say!
Your Rating: 0
Submit
Write A Review
Genre:Action, Horror
Developed By:Rebellion Developments
Publisher:Rebellion