Big Moustache Games and Headup Games announced the release of the multi-player strategy survival RPG,  Grimmwood – They Come At Night on Steam PC! Available now on Steam with a 10% release discount, so the current price is $13.49 USD instead of $14.99 USD.

“Grimmwood” features several rogue-lite RPG elements that will challenge players to cooperate with other members of their village to prevail over evil. In Grimmwood, you defend your village together with up to 39 other strangers (real-life players) in an ageless mystical forest. Fight against the merciless monster hordes that unleash their wrath against your shelter every night. For survival, the whole village has to work together as a well-organized team. “Games” take weeks to complete, then onto the next village.

For an even harder experience, you can try the recently added “Blitz Mode”, where a day in game lasts 15 minutes instead of 24 hours real time. As a result, players are able to spend longer time periods in the woods – one day after another.

You and your village’s survival depends upon execution of different tasks in Grimmwood. You strategically plan your scouting routes and explore the procedurally generated area around your village; you gather resources like food, gear and other useful things; craft weapons, tools and food, and strengthen your village’s defences before night falls. When darkness is upon you hordes of monsters will relentlessly attack your village every night to try to plunder and kill you and your co-villagers. Rumour has it that after thirty days help will arrive from the outside, it’s up to you to survive together with your village as long as possible!

With formal release comes many improvements from the open beta phase, including:

Read on for more about Grimmwood and stay tuned to Gamespace.com for our forthcoming impressions piece! 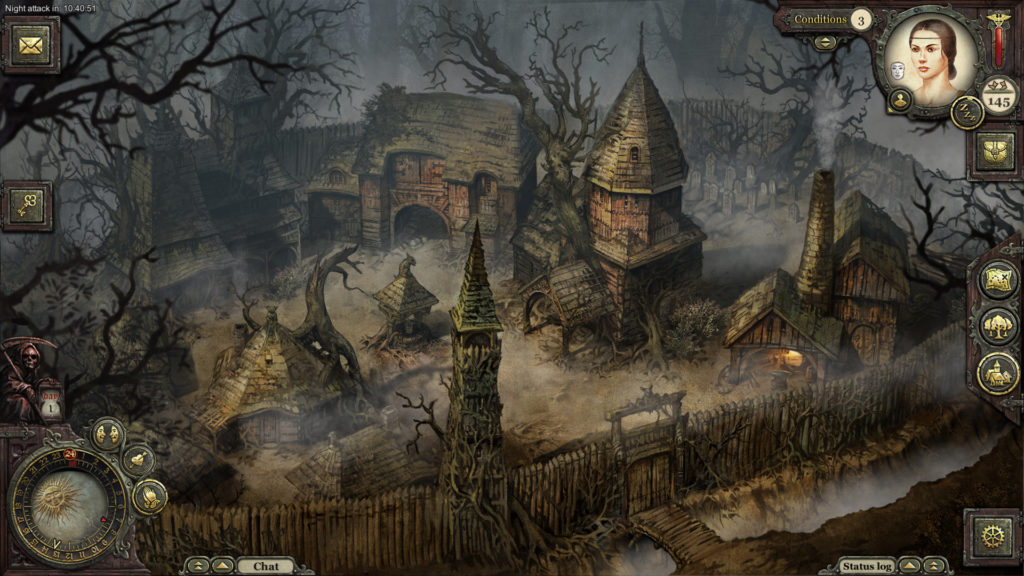 You’re in a village in an ageless, mystical forest, together with up to 40 other strangers all of which are real, live players. Together you need to defend your village against the merciless monster hordes who unleash their wrath against your shelter every night. Use the daytime wisely to explore, gather resources, upgrade and repair. But to be able to do all that you have to eat, drink and rest because every action in the game takes its toll on your stamina and sanity.

The Gameplay
Every night monsters attack your village. Use the daytime and your stamina points to explore the procedurally generated forest, find weapons and useful items, collect food and resources to upgrade and forficate the village. Share tasks and decisions with the other players and work together, because night by night the monsters attacks will become more fierce… And the village must survive at all costs!

The World
The world of Grimmwood is engulfed by a nameless 16th-century war raging across the continent. The Villagers are common folk, refugees from the big cities who seek sanctuary in the depths of the ageless Forest. Many of them have lost their loved ones and all their belongings… everything but their will to live and see another day.

The Village
The village which the survivors have discovered deep in the Great Forest seems a lot older – probably even with by centuries. It is destitute of any signs of life – nothing to even hint on what might have happened to its former inhabitants.

The Monsters
The Great Forest is old and vast. There are things here never seen by any man… who lived to tell the tale. The villagers are not wanted here – they only disturb the natural order of things in this dark and secluded part of the world.

The Mystical Forces
A lot of things that happen in the Great Forest go beyond anything the villagers have ever experienced or have the capacity for understanding. Resurrection, mystical artefacts, herbs and potions with amazing effects on the human body – there’s a lot to be discovered, examined… and probably feared.

Written by
Scott Jeslis
Scott is a comic book, music and gaming nerd since the late 70s. Gaming all began on the Colecovision and Atari 2600. He buys and reads new comics every Wednesday from his LCBS and helps run an online Heavy Metal radio station.
Previous ArticleSteam High Five: Lay Down The Law!Next ArticleBoard Game Gloomhaven Will Get PC Adaptation