Welcome back to Just Fun Tech, our column dedicated to tech that’s just plain fun, both inside the world of gaming and out. Today, we’re looking at the latest robot vacuum from Roborock, the S7 MaxV Ultra. A vacuum review, you might ask?! It’s true. We’ve been following Roborock releases for years, catching glimpses of our slowly arriving Jetsons future, and with the S7 MaxV, that’s closer than ever. If you’re looking for a great way to remove one more chore from your to-do list and steal back some of that precious gaming time, this product is a sure-fire solution that’s also bound to impress you with just how smart it actually is. This isn’t your average robot vacuum. 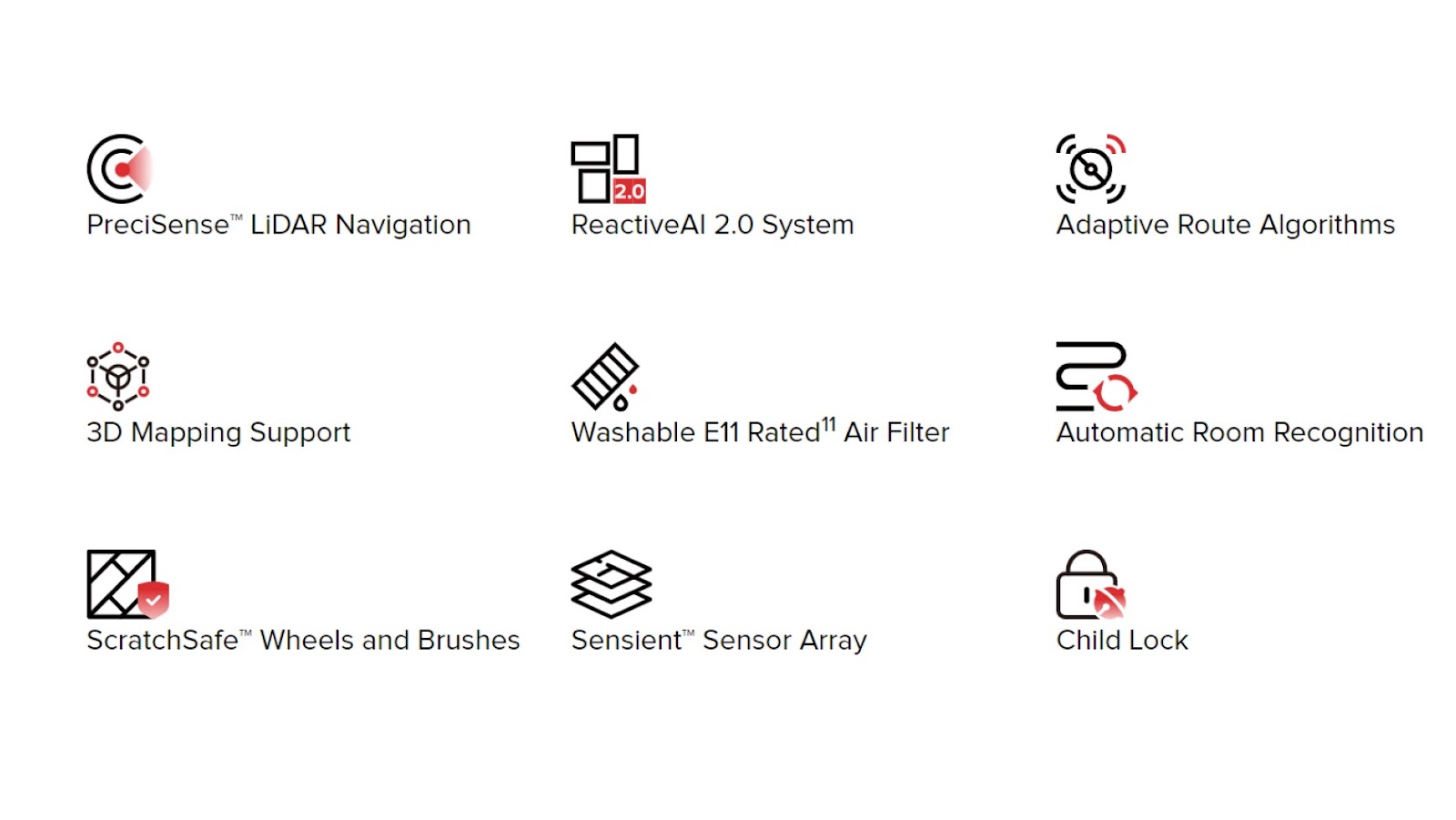 A smarter kind of home robot

We at GameSpace are no strangers to Roborock. In fact, we’ve been examining the brand since it was much smaller and harder to find. Since then, the world has woken up to what the company is doing and how it challenges other major brands in the space, like Shark and iRobot. The S7 MaxV iterates on what past models have done well to create a vacuum that genuinely leaves us wondering how much farther Roborock could improve this design. This is one of the most impressive robot vacuums and mops you can buy today. 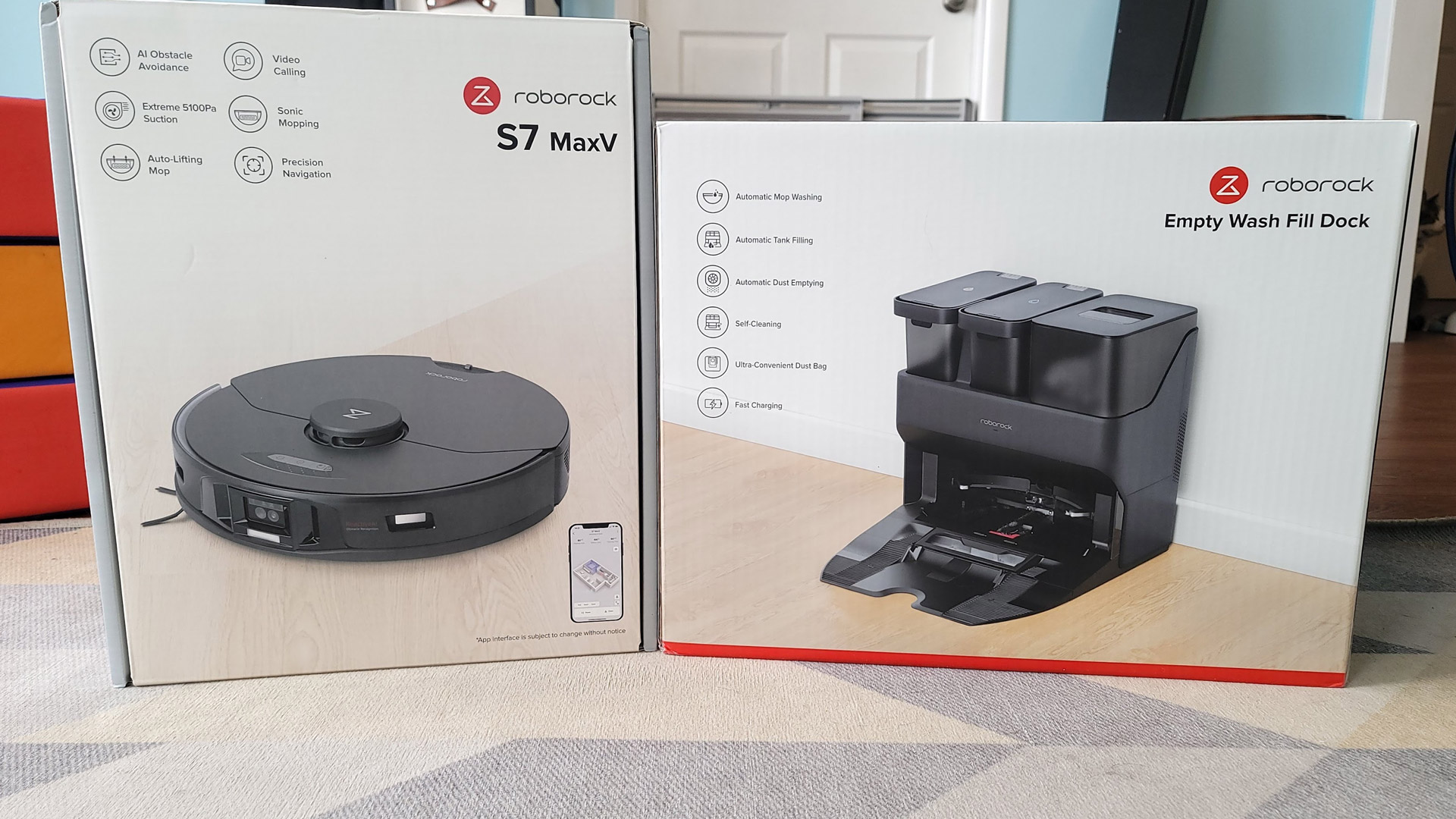 Like prior models in the series, the S7 MaxV Ultra is a standalone computer in vacuum form. It has eyes and ears (cameras, sensors, and a microphone). It has a brain, and memory, and uses AI to interpret what it sees and feels. It requires an app to unlock its full functionality, but it’s well worth it. The MaxV Ultra is fully programmable, right down to sectioning off small parts within individual rooms, whether you’re vacuuming or mopping. 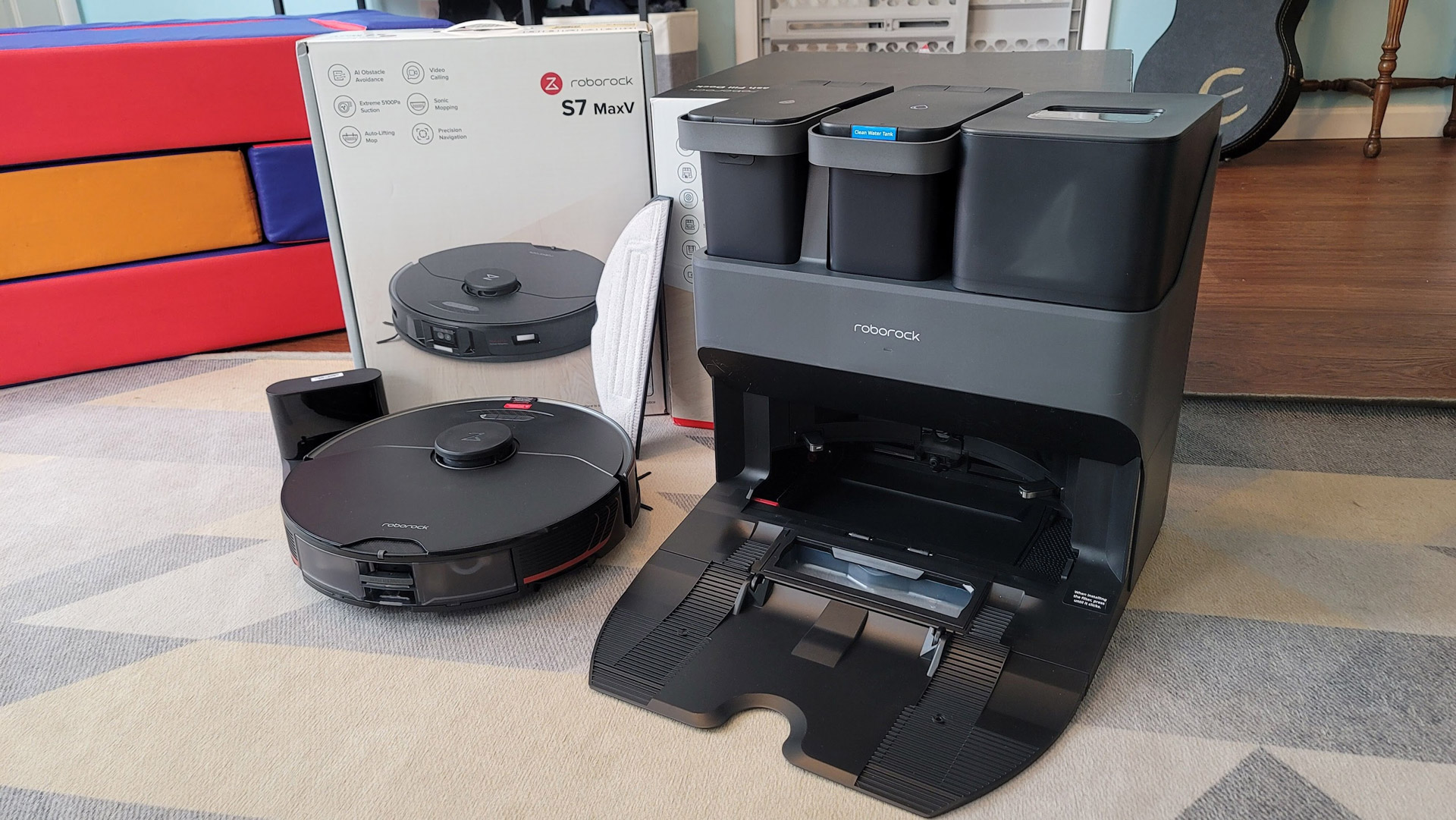 We could say the same about prior Roborock vacuums, but the Ultra takes it up a notch with its brand new self-cleaning Empty Wash Fill charging dock (note that the vacuum can be purchased separately for $859). Unlike most other self-cleaning docks, this one isn’t limited to either dust or water. When the S7 MaxV is done making its rounds, the dock will automatically vacuum the dirt into a disposable bag, wash the bottom, drain the dirty water, and refill it with clean water. You’ll need to swap bags every six to eight weeks, and water more frequently, but this new flagship maintains itself far more independently than anything Roborock has produced before. 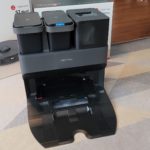 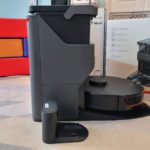 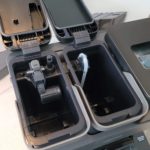 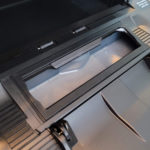 The vacuum is also much more capable of avoiding obstacles that tripped up previous models. It features an array of sensors and camera technology to take on everything around it, and then uses machine learning to identify an obstacle before it ever touches it (mostly, which I’ll get to later). 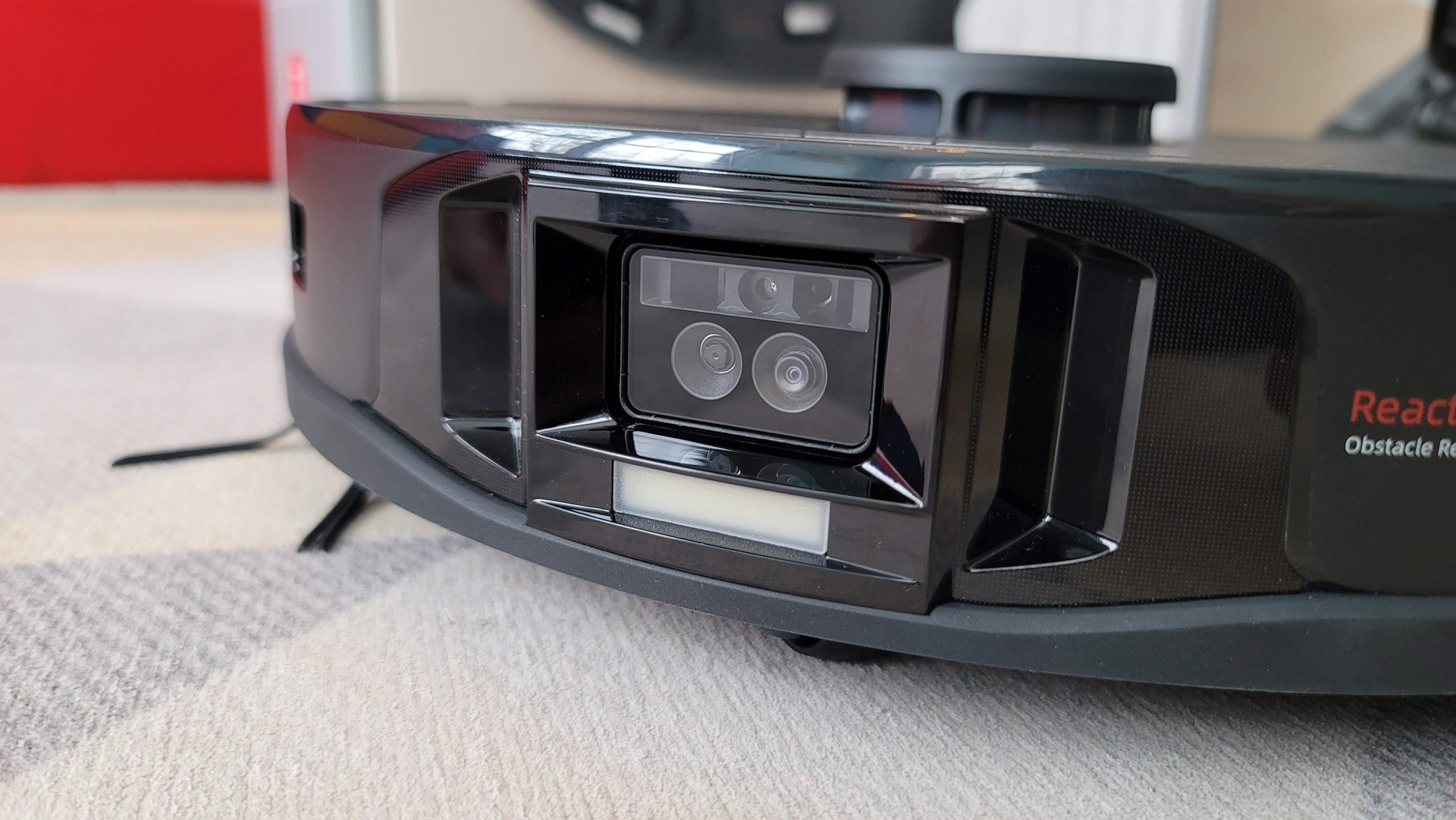 On the top and face of the unit, you’ll see its trio of navigation sensors. On the top, the precision LiDAR sensor returns to scan its surroundings in 360-degrees. Below, facing forward is an RGB camera, which can also be used for remote control and even video calls. Next to it is a second lens for structured 3D light scanning to better pinpoint the size and distance of objects in the environment. With its machine learning tech, it can decipher different types of obstacles and give them a wider berth if necessary (so no horror stories about animal poo being run over in the night). This system is also able to recognize common furniture. At your discretion, you can allow the S7 to take pictures of each of these and place them on the map it stores (visible in the app) but this isn’t required. Roborock is also quick to highlight that on a per-clean basis, it will actively delete any photos it takes to protect your privacy.

Using the app, you can fully customize the S7 MaxV Ultra and keep an eye on maintenance tasks that may need attention. This includes a full map of your home that you can label with different rooms and create “no go” zones. This is great if you’d rather it focus on the far side of your house while you’re watching a show and then open it up to clean the rest when you’re finished. Just as importantly, you can set the S7 to change its mopping and vacuuming pattern per room, including the intensity of both. No need to adjust for carpet versus tile or hardwood flooring, however. It will detect that and ramp up suction power automatically if you have the option selected in the app. 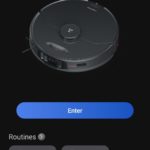 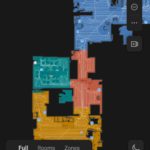 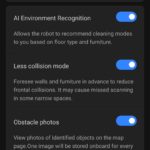 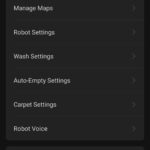 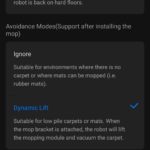 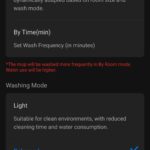 You can also adjust suction power, create schedules, change the voice feedback, and keep an eye on whether your sensors need to be cleaned/brushes and filter replaced. The app also lets you tap into the RGB camera and speaker to have a video call when you’re away from home. Or chase your kids around the house while you’re safely away at work. That too. You can control the intensity of the cleaning conducted by the dock, give it permission to decide when to lift the mop (such as moving into carpet), and allow it to turn on a flashlight to better detect obstacles in the dark.

The cleaning algorithms are also as good as ever. While other vacuums will haphazardly trace rooms, seemingly without rhyme or reason, the S7 MaxV Ultra intelligently moves back and forth in lines until the entire surface area has been covered, tracing the outer edge last for any debris that may have been pushed out of the way. It works well, but is especially noteworthy in the way that it will circle objects it detect to clean around their edges without actually disturbing them.

Okay, but how much better is it really?

I was lucky enough to get my hands on the new S7 MaxV Ultra more than a month ago and have been using it daily since. For most of the last year, my family had relied on the standard S7, so I was particularly keen to see what this new version with its improved navigation would bring.

The navigation on this new model isn’t just better, it’s WAY better. The S7 MaxV Ultra’s improved camera system allows it to pick up on even small obstacles from farther away. With toddlers and small animals in the house, even if we pick up before starting a vacuum cycle, occasionally small toys will find their way into its path. Where the S7 would need to touch, or sometimes begin to roll over these, the MaxV Ultra pauses and navigates around them. This includes my daughters jump rope and bits of yarn from crafts that tripped up the S7 multiple times in the last year, causing it to need rescue.

In fact, the only time the S7 MaxV Ultra has needed to be reset was when it inadvertently sucked up a controller wire that had fallen slightly out of the entertainment center. I don’t hold that against it, though, because then you’re mixing wires with furniture, and the wire wasn’t actually on the floor but instead just draped slightly and… you get the idea. Where it counts, this is a massive improvement. 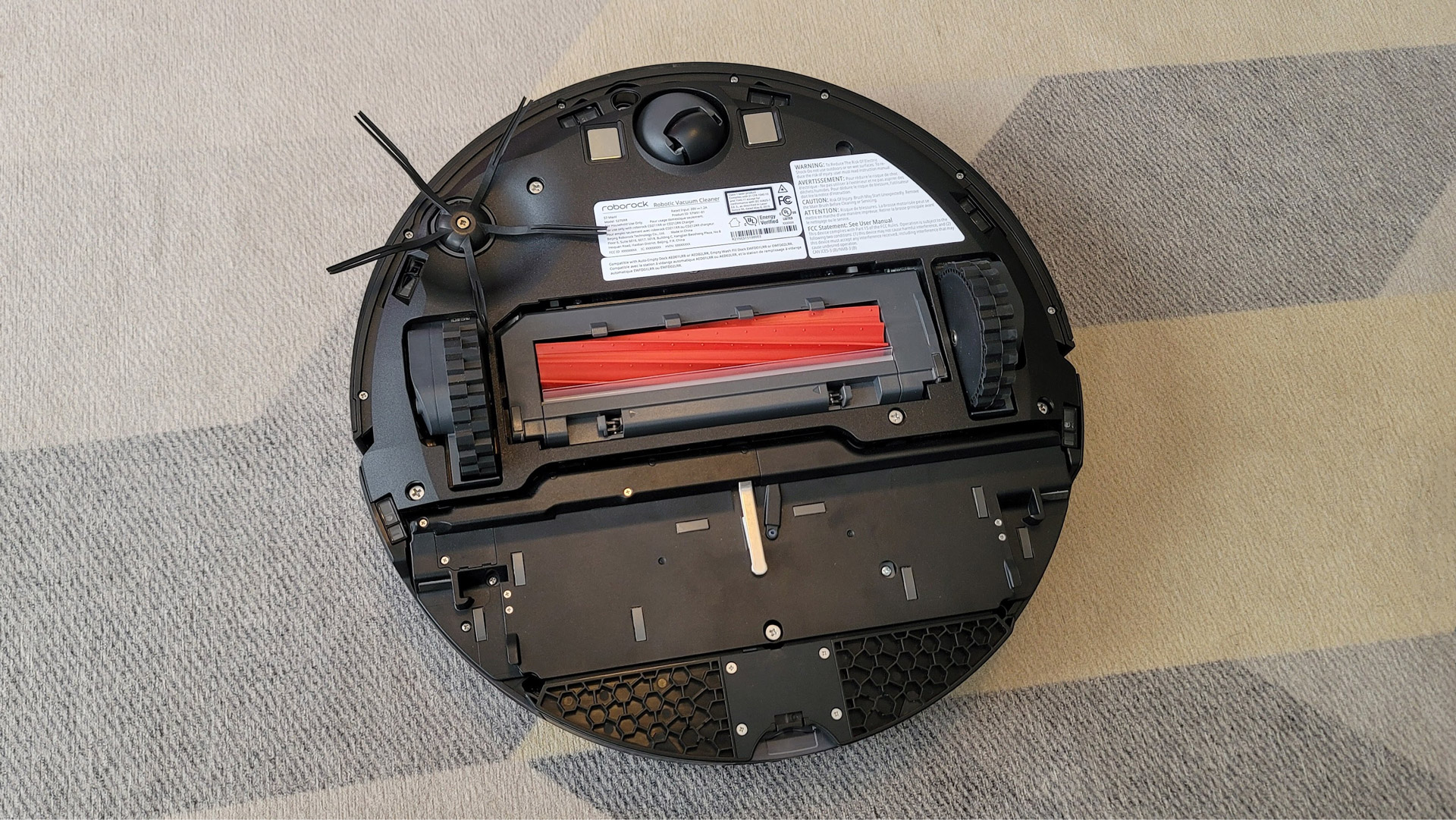 The same is true with picking up on people and pets. I can be doing the dishes and it will see my feet and trace around me. If the smaller external brush touches my toes and I need more room, I can gently touch the front and it will reset, pull back, and give me a wider berth. There’s no need to worry about baby toes or animal tails getting run over.

The new navigation system does introduce a greater chance of the device getting confused around tables and chairs, however. Our dining room is fairly compact. While our older S7 would tap its way around the chairs to get into the nooks and crannies and find its way into other rooms, the S7 MaxV Ultra sometimes sees the mass of chair and table legs and decides that’s it’s trapped and should return to the dock. This also happened in our school room when it found itself under a standing desk with a low bar, two wobble seats, and a white board easel. It’s not common enough to be a problem, and reminding the children to tuck in their chairs is enough to solve it, but is something that the more rudimentary navigation of the S7 could problem solve. 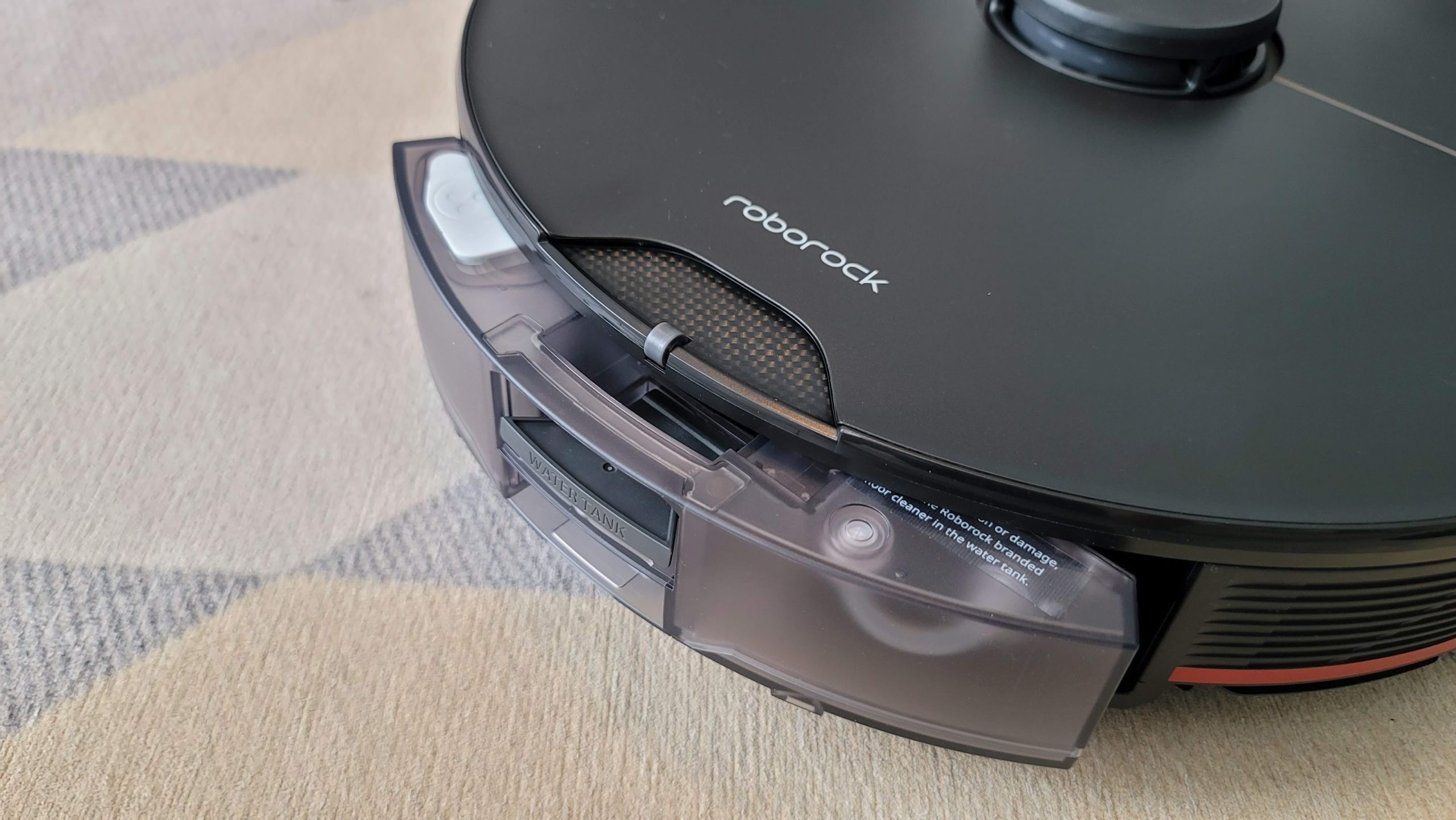 The actual cleaning performance remains excellent. We have four kids, three cats, and a dog. Between the dirt tracked into the house and the food crumbs that get dropped on the floor, any robot vacuum would have its work cut out for it. But everything from dirt, pet fur, and food particles to even spot cleaning for broken dishes and spilled coffee grounds, this vacuum is up to snuff. Of particular note is the carpet in the kids’ playroom, which also doubles as a cat and dog bed when the sun shines through the windows. Every night, that hair is pulled back up. Every day, they lay it back down. The cycle repeats.

The Empty Wash Fill dock is excellent. The prior S7 would need to be emptied nightly or else it would lose suction power thanks to the occluded dust chamber. In the last month, we haven’t had to manually empty the vacuum once. Once it’s done with its cycle, the vacuum returns to the dock to be vacuumed out and refilled. For water changing, there are little gaskets which press into the robot to prevent leakage. It’s smart and effective design.

But loud. My goodness is it ever loud. Even though it lasts less than 30 seconds, the vacuum force of the Empty Wash Fill dock is equivalent to a full-size vacuum. The S7 MaxV Ultra itself is quite a bit quieter than a normal vacuum on its regular suction setting, so when the dock kits in, it’s surprising no matter how many times you hear it. Still, I’ll take it compared to cleaning the robot itself every night. Loud, but freeing too. 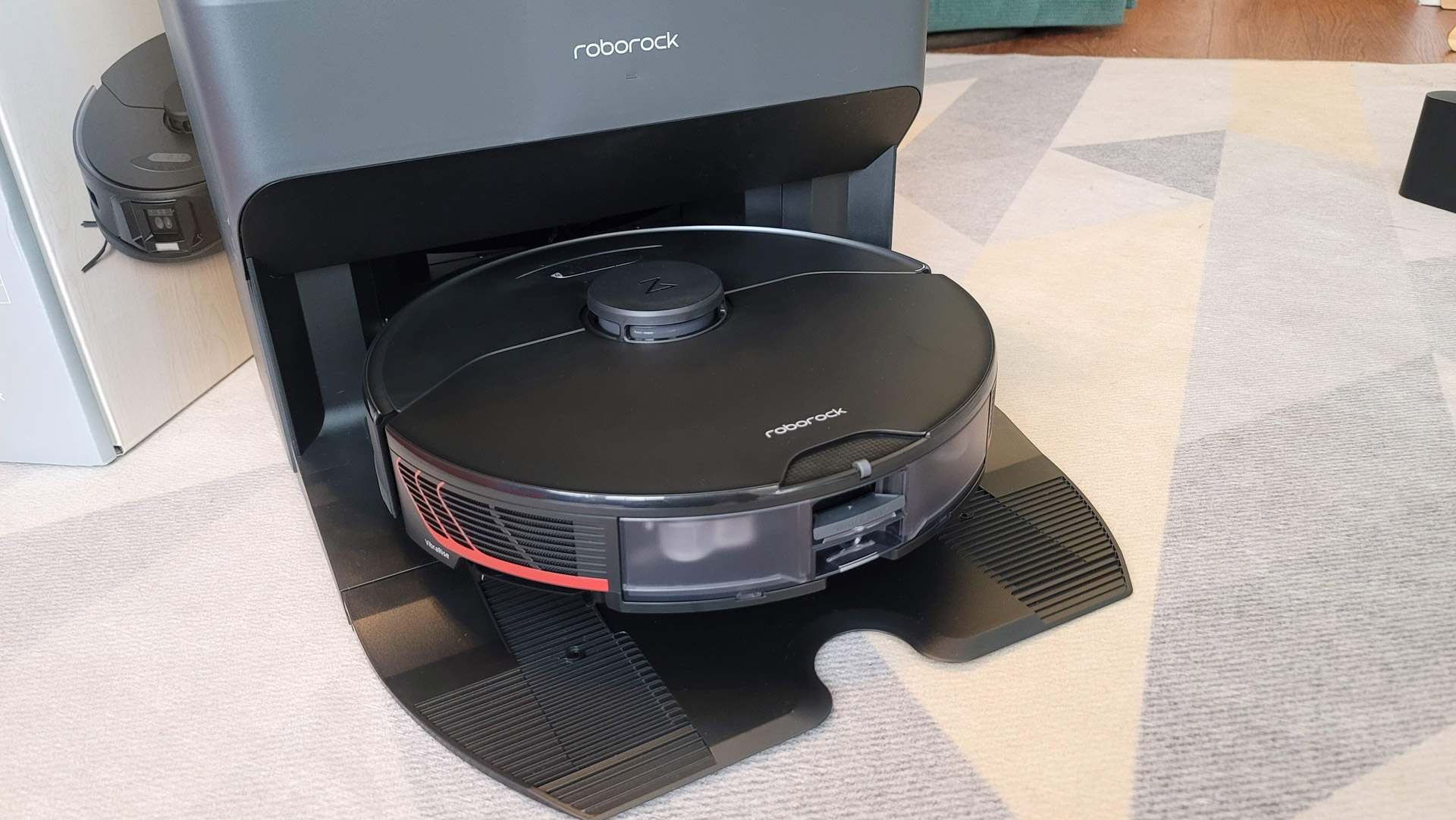 At $1399, the Roborock S7 MaxV Ultra is expensive but incredibly good. Whether or not the Empty Wash Fill is worth the additional $450 will depend on how much you need those independent cleaning functions, but one thing is for sure: it’s the gateway to the S7 MaxV really becoming an autonomous bit of tech, managing the floors of your house. With it, you can set a schedule and let it run on its own overnight, so you won’t even need to think about your vacuum more than once every month or two. And that’s what these robots are about: freedom.

The Roborock S7 MaxV Ultra is an excellent example of a robot vacuum done right and is Roborock’s best release so far. It deserves our top recommendation. The  Roborock S7 Max is available now over on the Roborock website.

A review unit was provided for this article

Written by
Christopher Coke
Chris cut his teeth on games with the original NES. Since then, games and technology have become a passion. He currently acts as the Hardware Editor for MMORPG.com and GameSpace.com.
Previous ArticleDiablo Immortal PC System Specs RevealedNext ArticleA Stunning New Trailer Paints A Tale Of Adventure In Arto