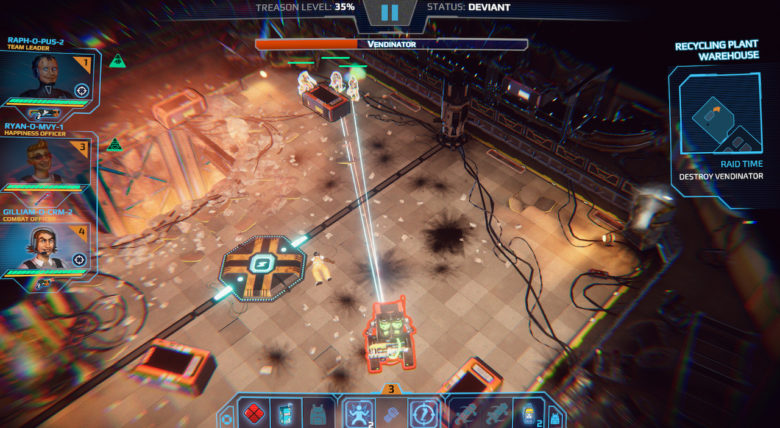 We’ve all heard the whispers of how if we pursue A.I. it will take over the world. Well in Paranoia: Happiness is Mandatory that’s technically what happens. With Friend Computer you don’t need to worry about a thing. Everyone has a place and to that place a person. Should you stray from Friend Computer’s ideal plan you will surely find yourself on the opposite end of its excellent insight with yourself being branded a traitor. Are you ready to dive into a world where A.I. controls your day cycle and the ways to become a traitor are numerous and plentiful? Come let us have Friend Computer lead the way. This is our Paranoia review.

Paranoia: Happiness is Mandatory is a CRPG adaption of the RPG Paranoia Troubleshooters. Like the RPG original in the world of Paranoia, you play a Troubleshooter whose sole purpose is to do what Friend Computer, the ruling A.I., says. You lead a group of other Troubleshooters around Alpha Complex, the city you are in, seeking out traitorous people that seek to breakdown the status quo made by the A.I. Funny enough this was just the overarching gameplay as while you play you can become one of said traitorous people through your actions. You are not only being watched by Friend Computer but also your companions. Each usually plays to their own feelings and could betray you at any moment. 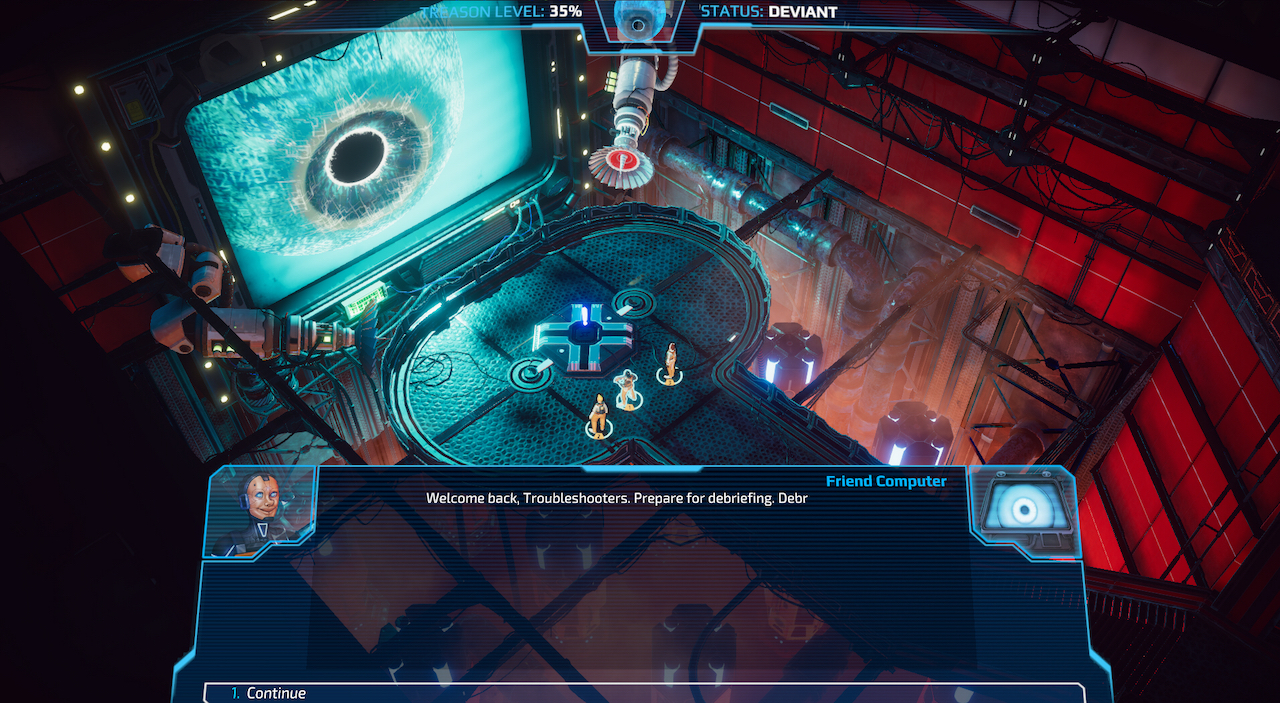 The Way of Friend Computer

Friend Computer assigns the TroubleShooter team missions to seek out traitors that look to harm it and the structure of the Alpha Complex. For each mission, you are assigned items and gear which is nice because you don’t need to worry about where to get equipment. I found visiting the R&D department before each mission to be a hilarious interaction. As a Troubleshooter, you get to test all sorts of whacky gadgets for them. One of the items I got from them was a foil cap that blocked out Friend Computer. This is when I found out as a player you can choose to keep some of the R&D items by way of hiding it in your storage container. It is traitorous to do so though.

The humor of the interaction with all the characters in the game is very funny. In the very beginning, there is a person who has taken over an area and is running a big IRL D&D game. You will run into some hilarious characters throughout your playthrough. The real meat and potatoes are that you play a clone and how that ties into the game. Dying is a major part of the game which it’s going to happen but you have back up clones.  With each iteration, you get to reassign skill points and approach playing from a different playstyle. One day cycle you may be fully mechanically skilled. Then if killed, on the next clone you may want to be fully invested in the brain skills making you a professional in all bureaucratic processes. I always try to rotate how I do my points as it made each cycle interesting having different skills to work with.

During missions, I did find myself needing different skills but that is where companions come in. Before you set out on a mission you get to choose who you will bring with you. There is no way to know if their skillset will be needed during the mission. I liked this aspect because there are always traitorous actions you can take to get around obstacles or items you can consume to boost skills. Know sometimes these actions are considered bad to Friend Computer. I did enjoy the story of the game and playing it, but I often found myself not being able to sit down and play it for long periods. After dying during a mission I found myself not feeling like going through everything again. It restarts you from the beginning of the mission which at points I just did not want to go through all the fights and text again.

Missions can be tough when they involve fighting. You have maneuver your group around X-Com style but it is live, not turn-based combat. Many fights I found myself in situations where companions died, I was out of health items and it came down to the wire. Luckily there is the pause function to help you survey the battlefield and queue an action. This function saved me in one of the boss fights. 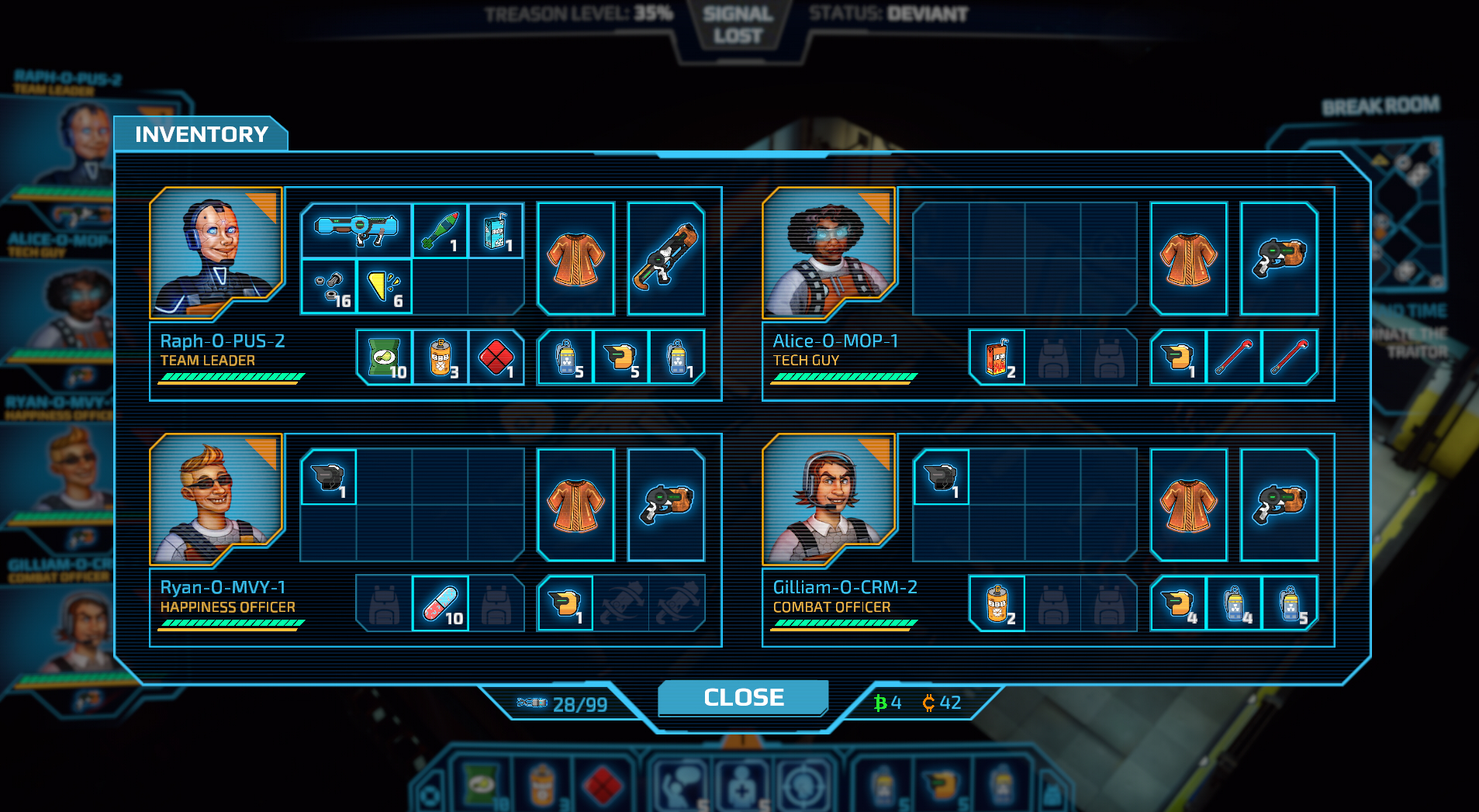 Conclusively Paranoia: Happiness is Mandatory is a great adaption of the Paranoia RPG. It shares all the rule similarities of the RPG but now in a CRPG and it all works so well. It is a very funny game with fun strategic combat. The fact that there is replayability in making different choices during a different playthrough is something I love about Paranoia. I often find myself wondering what if I had reported certain information to Friend Computer instead of hiding it. The difficulty of hacking vending machines made me want to stop a few times because it is time-based. The letters fell too fast. Also, there never seemed to be enough time, but I assume that’s because I never had a high hacking skill. I always spread my points out. Figure that’s the point of clones, you figure it out as you play. I hope this review in some way helps you to know that Friend Computer is always watching and always right. More importantly, Happiness is Mandatory. Have fun gaming!