Maybe you fancy yourself the “dinosaur” or monster or behemoth hunter/slayer type? Perhaps your interest was piqued by Monster Hunter World but it just seemed a tad too complicated? Sounds like one of many reasons than to check out Phoenix Labs‘ Dauntless which is available now on PC, Playstation 4 and Xbox One. This is our Xbox One review of the free-to-play collaborative “monster” hunting action RPG game, Dauntless.

Dauntless‘ premise is pretty straight-forward. To hunt “behemoths”, as Phoenix Labs refers to them as. These creatures are a cross between exotic animals we know in the real world, crossbred with dinosaurs, and are powerful, wild, and ravenous for the aether that holds the Shattered Isles aloft. You as the player enter the game as a Slayer of these beasts. Your job will be much easier by teaming up with other Slayers to hunt and slay these “mass behemoths of destruction”. 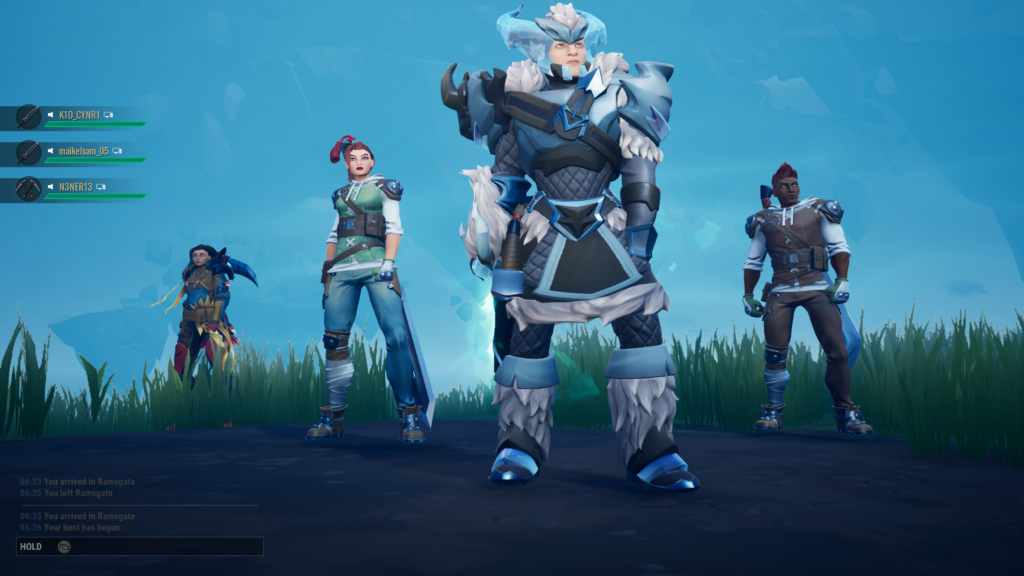 To progress in Dauntless you need to fulfil hunting, crafting and achievement quests. All the “in the wild gathering” and monster slaying is done in instanced “hunts”, akin to matches. You can go the hunt alone or in a group of up to four Slayers. In these instanced matches you can gather things in the wild but you also earn gathering supplies and equipment augments by succeeding at slaying the target behemoth. Hunting alone only seemed to be beneficial if you were gathering in the wild, e.g. plants, logs, etc. You can gather these items in a group hunt but more times than not people in the group typically “boss rush” to where the behemoth is.

Group hunting can be accomplished by a predefined group or you go the “looking for group” path, a.k.a. “pick-up group” or “pug”, and be placed into a queue while the system performs “matchmaking”. On a good day and time slot, “pug” groups took around three minutes to get to the “ready check” screen. It’s at these screens you see your group members pop in. You’re served up with hints on the best equipment and weapons to equip and how your equipment/weapon power fairs against the minimum recommendation. It’s here that you can swap out gear since all team member needs to manually go “ready” with the option to go unready. 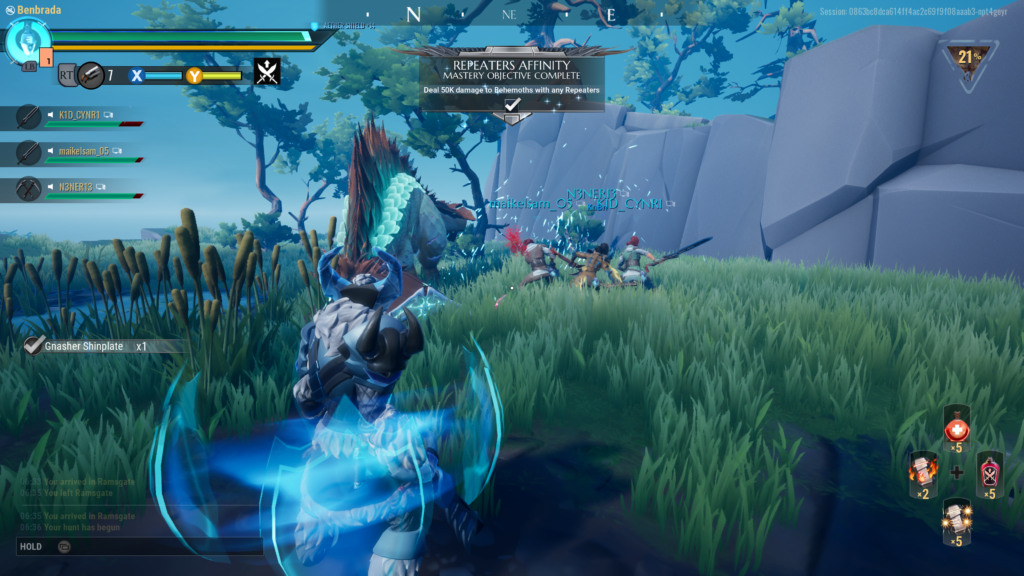 Initially through the first eleven levels or so the targeted behemoths weren’t difficult to find. None of the beasts encountered were deemed “easy” to kill. Even with a group of four well-equipped Slayers, you’ll spend about roughly ten to fifteen minutes hitting, dodging, positioning and evading your targeted kill. This aspect of the game presents an interesting dichotomy of sorts. The “good” is the fact that this cycle makes the foundation for a great game for a casual player. If you have fifteen minutes to spend before feeding the dogs then jump in and slay an Embermane. The “bad” is that to some this might be viewed as perhaps “repetitious”. It’s unknown how fast a solo “private hunt” takes if tweaked out in gear and taking on an early beast.

Phoenix Labs has done a great job of alleviating the repetition in the equation. A Slayer is allowed to use any of the in-game weapon and armour types at any time. There are not only NPC quests but everyone has a Mastery list to work on which is a nice name for “achievements”. There are achievements for each beast, weapon type, armour type, etc. Fulfilling these achievements yields some nice rewards as well. There is also on an ongoing free, basic “Hunt Pass“, akin to a “season”, that awards cosmetics and such when you reach certain milestones. A “season” runs for typically fifty days or so. The current Hunt Pass in progress is deemed “Season 5”. Masteries for early level beasts are quite extensive and will perhaps be viewed as a “grind” by some. Hopefully, these objectives will keep higher level Slayers coming back to early behemoths to keep group matching alive at those lower levels. 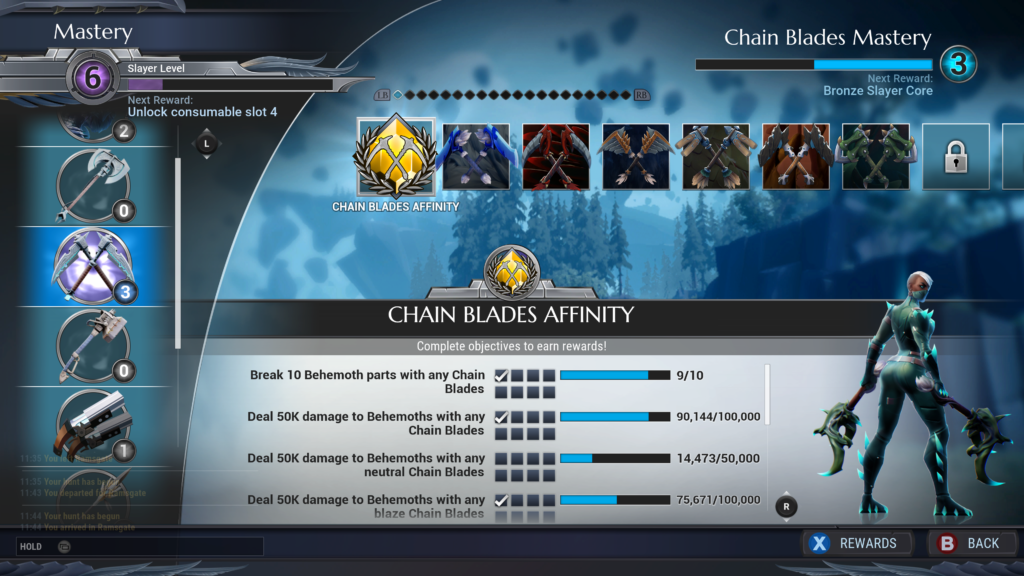 Group matching is one of this game’s strengths mainly because of how complete of a “cross-play” feature Phoenix Labs has implemented. As mentioned, Dauntless is available on PC, Playstation 4 and Xbox One. Dauntless is perhaps the first game that allows all three systems to play as one! This means console players can group up with their reluctant PC playing friends. You can friend each other! You can be in the same guild! You can text chat with one another! You can voice chat together! Every player’s avatar has an icon next to their name depicting which system they are on! It doesn’t end there. Since Dauntless is free-to-play you can play on Xbox One and link your account to your PC account and play your Slayer on either system! It seems silly to be so excited about something that seems so trivial in 2019 but it is what it is. It’s unfathomable as to what hoops and boundaries had to be crossed to accomplish this but don’t take it for granted! Imagine the possibilities if Dauntless can extend this into the Nintendo Switch “realm”? To keep framerates reasonable, all your crafting, hunt board lookups, etc. are done from a major city that serves as your “hub”. These appear to be instanced as well since upon initial login the system is performing “matchmaking” before your completely zoned in. 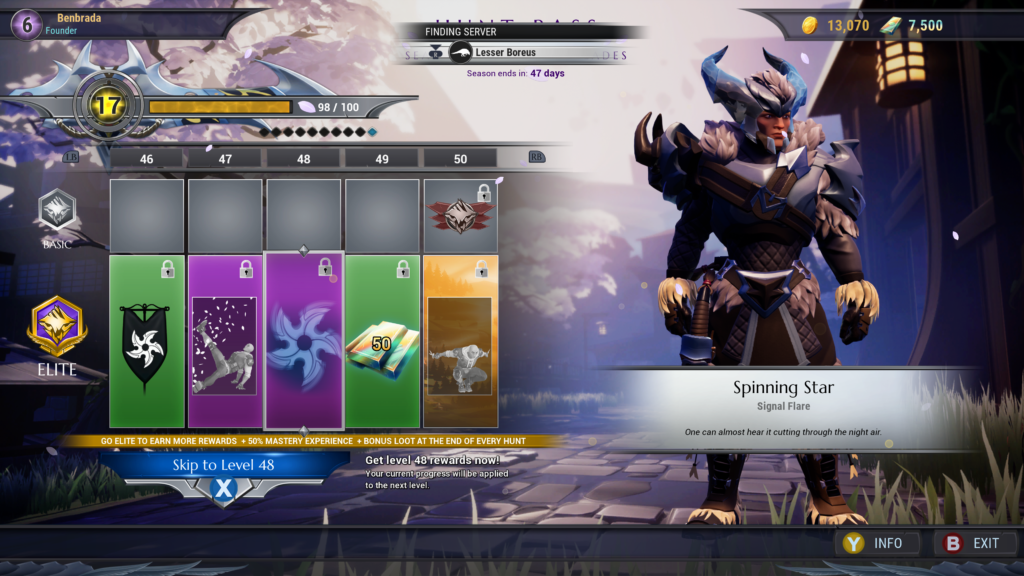 The group’s effectiveness within a hunt is also graded by the system. Additionally, you’ll receive a personal effectiveness grade, in a school-based letter grade “A”, “B”, “C”, etc. format, within that hunt. There’s no knowledge of whether or not this ranking affects the quality of your stash from a kill.

It was also mentioned that Dauntless is free to play. The obvious question is how do they pay their bills? There is an in-game store for real-life transactions for cosmetics and such. There is also an Elite version of the “Hunt Pass” which, if paid for, increases the number of cosmetic treasures you can earn per season level. You can also buy “skip levels” for a Hunt Pass in case you see a shiny emote or armour cosmetic at the top tier level but are running out of time to get the required XP.

Note: Our review was conducted in part with monies provided by PR to purchase the elite hunt pass on Xbox One.

Tags: ARPG, dauntless, Online Co-Op, phoenix labs
Summary
Dauntless is a marvellous co-op action RPG wrapped into a wonderful and fun monster hunting game. It's an excellent F2P choice for casual gamers and hardcore hunters alike. It's also one of the few games that console only owners can cooperatively play alongside their PC-centric friends! Phoenix Labs has set a new standard for cross-play that we hope other developers will one day also embrace! Bottom line this game is monstrously fun!
Good
Bad
8.5
Great 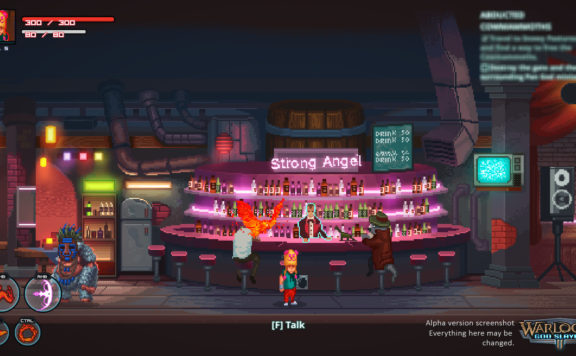 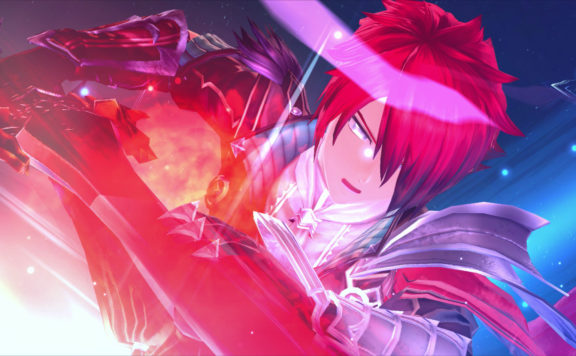 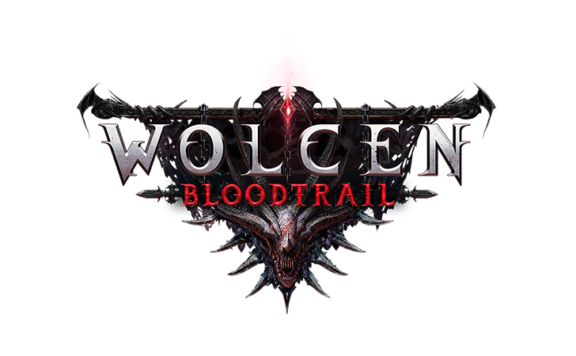 Maybe you fancy yourself the "dinosaur" or monster or behemoth hunter/slayer type? Perhaps your interest was piqued by Monster Hunter World but it just seemed a tad too complicated? Sounds like one of many reasons than to check out Phoenix ...
0
Average User Rating
0 votes
Have Your Say!
Your Rating: 0
Submit
Write A Review