In a time where MOBAs are becoming as mainstream as superhero movies, it’s a risky time to try and make your mark on what some would consider a saturated market.Yet ‘Games of Glory’, the newest title from indie studio ‘LightBulb Crew’, has set out to do just that. Currently in open beta on both Steam and PS4, ‘Games of Glory’ offers a unique if not sometimes unpolished take on the booming genre. So kick back, grab a coffee and take a look at our Games of Glory review.

‘Games of Glory’ sets the player in a universe where clones are more science than fiction and areas are entertainment. Think Roman Coliseum but without all the brutal, unbridled bloodlust and with… you know… clones. Not the best analogy but you get the idea. Honestly, the story isn’t exactly the most important aspect to an MOBA (Multiplayer Online Battle Area for the uninitiated). Frankly, at the end of the day you have two teams, one objective and lots of cool ways to destroy each other; really that’s all the story you need. 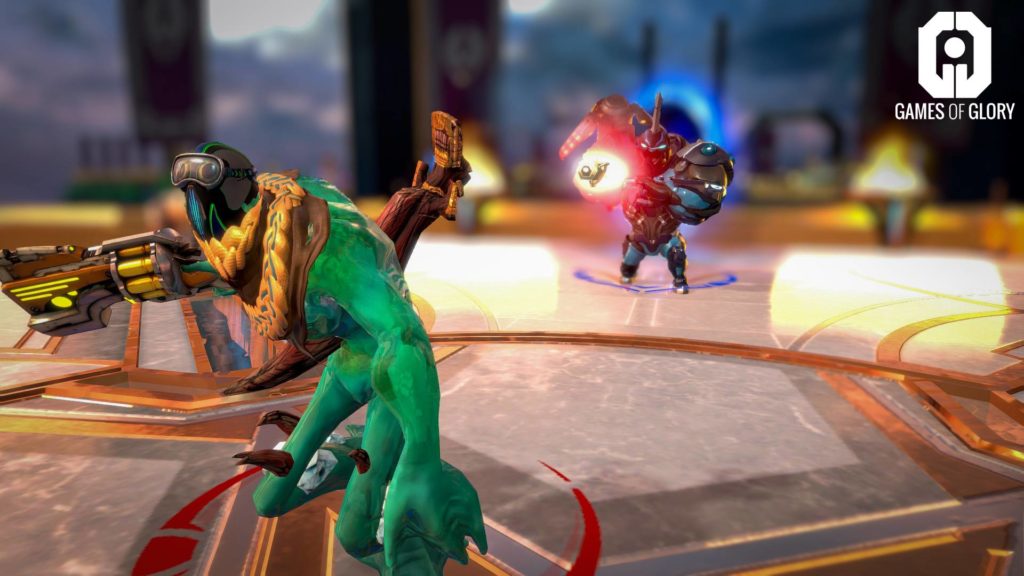 Gameplay is solid and fun. At present, it follows a WASD and mouse style setup with movement being the former and directional aiming being the latter. I found this to be a bit sloppy from a play style perspective. I was thrilled, however, to learn that the game supports a gamepad and after a quick settings change was happily dashing, shooting and casting with my Xbox one controller to my bloodthirsty ….er ….heart’s delight.

This game feels like it was meant for the controller. When using one I was greeted with what felt akin to a twin-stick shooter. As a long time fan of games like Gauntlet, HellDivers and Dead Nation this instantly made the game so much more entertaining. Having tested the controller functionality on both PC and PS4, I can honestly say that if you’re new to the game and have the option, use a controller. I think you’ll find the game much more welcoming and easier to get the hang of.

With combat and movement refined for the controller experience, “Games of Glory” is an excellent place for console players to enter the MOBA fray. With quick combat, only a handful of skills to manage and an easy to navigate in-game menu system, you can quickly get in and do some damage without previous experience. Unfortunately not every system in the game is easy to use or navigate. Outside of the arena, the menu systems become a bit cumbersome and hard to follow. This was an odd contrast from the in-game menus and left me a bit frustrated with overall game navigation. 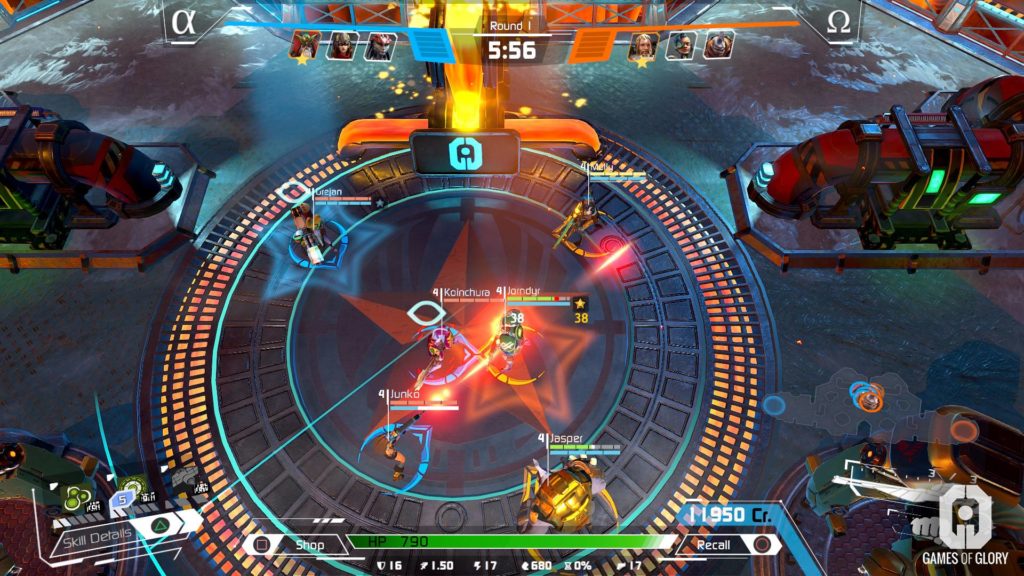 I’ve been playing video games for over 25 years, having spent the last 5 years focused on MOBAs. I have a pretty solid handle on MOBA roles, mechanics and character builds.

With Games of Glory I noticed that information is not laid out well for a new player in terms of understanding the above-mentioned concepts. I spent several minutes at the character screen trying to get a handle on which characters provided which roles. When queuing for a match this becomes overwhelming quickly. This could be frustrating for new players and is definitely something Lightbulb Crew will want to refine.

‘Games of Glory’ has done away with the traditional item managements systems of titles like ‘League of Legends’ and Dota 2’ and replaced it with a simple weapon and upgrade shop. It’s easy to understand, easy to use and allows any character a wide variety of weapons, both melee and ranged, to choose from. With the ability to switch between weapons on the fly, you can easily change tactics without warning adding to the already crazy quick combat that takes place. This, coupled with each character’s three abilities, makes for some interesting clutch moments during combat.

One of the best features in the game is that it is truly cross-platform. When queueing it shows you who is on which system. The cross-platform is seamless as well and I felt that the game experience was equally enjoyable on both systems and was so grateful that Lightbulb Crew took the time to nail this feature down. This cross-platform play coupled with the club system (think guilds) will make ease of access a big win for ‘Games of Glory’. 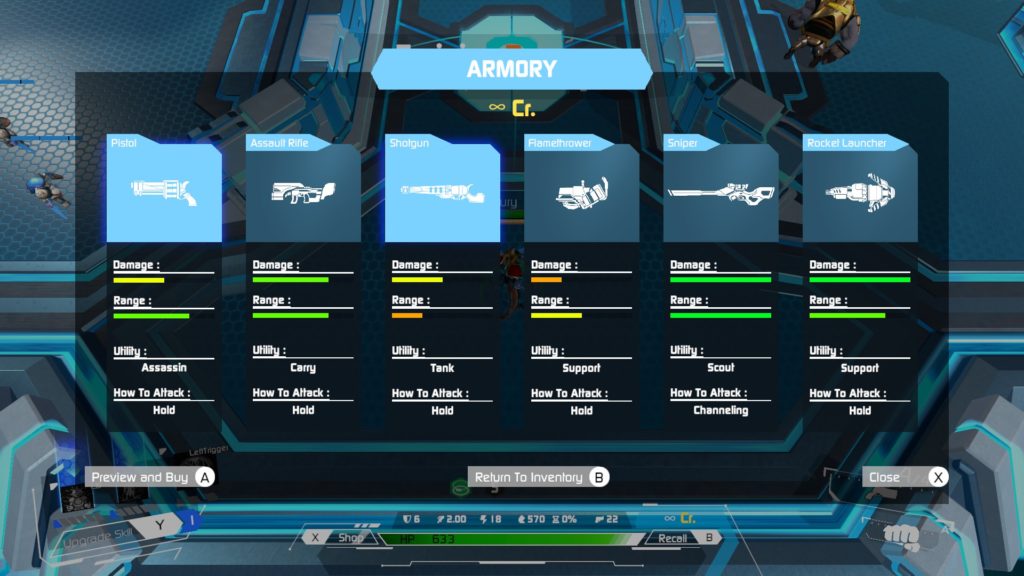 The game does have a couple of shortcomings. My biggest gripe with the title at present is the lack of variety in maps, as in there are only two of them, one of which never seems to come up on rotation. I tested this theory on both PC and PS4 and have only actually played one of the maps in a PVP arena. This is a bit frustrating because without a change of scenery, objectives or layouts player retention can quickly fade.

At present, the game offers only two modes: Dominion and SuperStar. The former is a unique take on the standard MOBA objective of wearing down the other team’s defenses to destroy the core. The latter is a VIP style game where, in a team of three, two are tasked with protecting the third while hunting for the other team’s superstar. It was actually the more enjoyable of the two modes but, as mentioned, was unfortunately linked to the map that never came up in the rotation. I actually tested the game mode in an all-bot custom game and would have loved to take it to PVP. 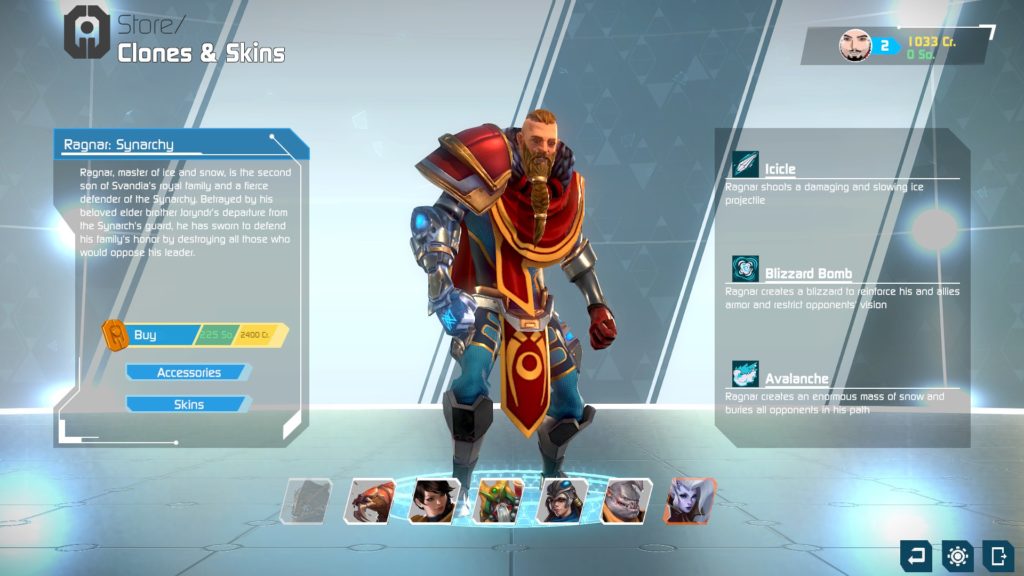 Final Thoughts on our Games of Glory Review:

‘Game of Glory’ brings some unique ideas to a genre that has been for the most part doing things the same way since its inception. For that I tip my hat, if I was wearing one. I appreciate any company that is willing to take risks and try to bring new ideas to the table. For the most part they are moving in the right direction. Yet at this point it’s the lack of variety that keeps this title from really excelling and leaving the mark that it seems to want. If your console player with no experience with MOBA’s Games of Glory is a great place to start. It’s not perfect but with time it really could be a great game that leaves its mark on the genre

Games of Glory is a free-to-play competitive team-based top-down arena shooter. Fight alongside or against your friends in intergalactic arenas of the Synarchy! The game offers 3v3 or 4v4 matches and over 50 non-character specific weapons to choose from. Players can get their hands on sniper rifles, pistols, rocket launchers and more.
8.8
Average User Rating
2 votes
Have Your Say!
Your Rating: 0
Submit
Write A Review
Genre:Action, MOBA
Developed By:Lightbulb Crew
Publisher:Lightbulb Crew
Modes:Co-op, Multiplayer