Ys VIII the Lacrimosa of Dana is an impressive and interesting addition to the JRPG series which offers a fun and engaging game from top to bottom. No matter if you have played the other Ys games before or not, this is a game you shouldn’t pass up. This is our Ys VIII review.

Ys starts off with the main character Adol Christin working on a ship for passage on his way to adventure. Before too long the ship is attacked by a mysterious sea creature and I found myself shipwrecked on a legendary deserted island no one has ever returned from. One of the first tasks in game is to find as many of the missing castaways as possible. I was led to the first few directly through the story and it was impossible to miss them. However, as I got further into the game the castaways were people I just stumbled on when I was exploring the areas of the island and it would have been possible to completely miss them.

Every castaway who is found adds something of value to the castaway village and it’s worthwhile to try and find as many of them as possible. One of the most useful castaways is Catherine who is a blacksmith and will craft new armor and upgrade weapons. In addition, the tasks each individual castaway has in the village there are certain obstacles which can only be passed if I had a certain number of castaways found. Some of these obstacles block the way to continue the main story while other merely block the way to the treasure.

Along with the story of Adol and the castaways, there is also the story of Dana and the people of Eternia, who appear to have lived some time in the distant past and we only get glimpses through Adol’s dreams. These two stories are told concurrently and are linked in some surprising ways. In fact, as the Ys VIII progresses seeing how these two stories become increasingly linked and merge from one single solid narrative was one of the most interesting narrative aspects of the game.

At various points during the story, an Interception will happen. An Interception is essentially the village being attacked by waves of angry monsters. The active party is given one part of the village to protect while the rest of the village will randomly help out during the fighting. How often castaways will help and how effective their help is will depend on what your current approval rating with each castaway is. At the end of the Interception, your team is rated on how many mobs you took out and how many defensive structures you lost. Later in the story suppressions will also happen. These are fundamentally the same as interceptions but instead of the village being attacked the group goes out into the island to accomplish a specific goal. 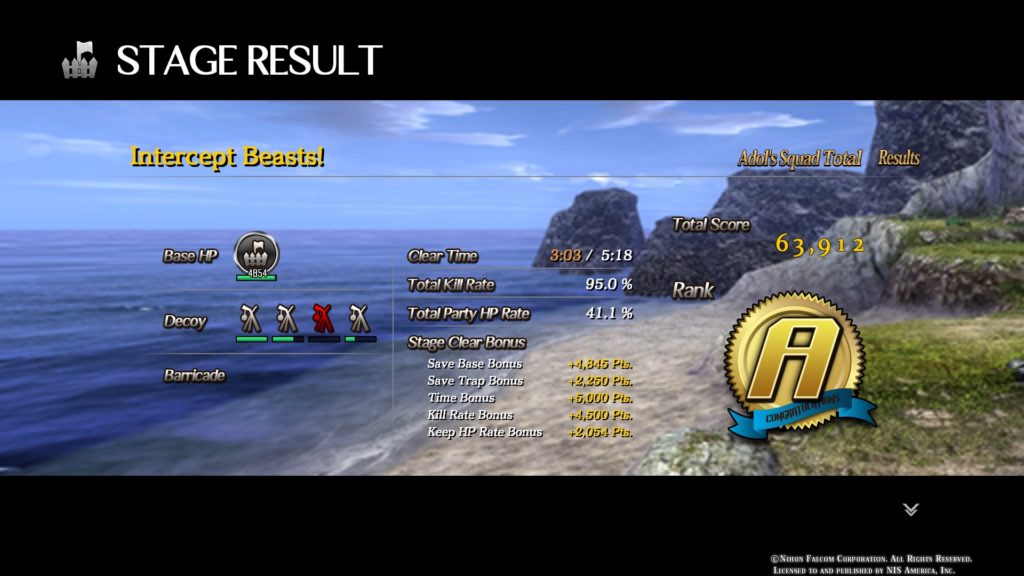 The only issue I ran into with Interceptions and Suppressions is when I focused on progressing the Main Story more than exploring I started to fall behind on the suggested levels a bit, though on normal difficulty being slightly under leveled didn’t seem like it was much of a hindrance. Due to the action combat, effective use of abilities and mechanics can help make up for lack of character levels.

Approval rating with each castaway does not increase their effectiveness in Interceptions/Suppressions but it also affects their willingness to help with removing obstacles. The easiest way to raise approval is to do their personal quests when they pop-up instead of ignoring them. There are also gifts which can be bought from the merchant which will also help raise the approval ratings of the villagers. For the most part gaining people’s approval is easy and unless you are trying to rush through the game there isn’t much of a reason to skip it. As an added bonus rising approval ratings with party members also will grant Adol stat increases.

Exploring is a huge part of Ys VIII but it can also be a bit of a pain. The map is divided up into zones and each zone has many subsections within it. These subsections can often be quite small and allow you to see into the other subsections. Early in the game, I was often frustrated by not being able to jump off ledges or up a hill but as I got further in I realized when I couldn’t do this it was because I was trying to jump into a different subsection but this fact wasn’t always obvious on the map. 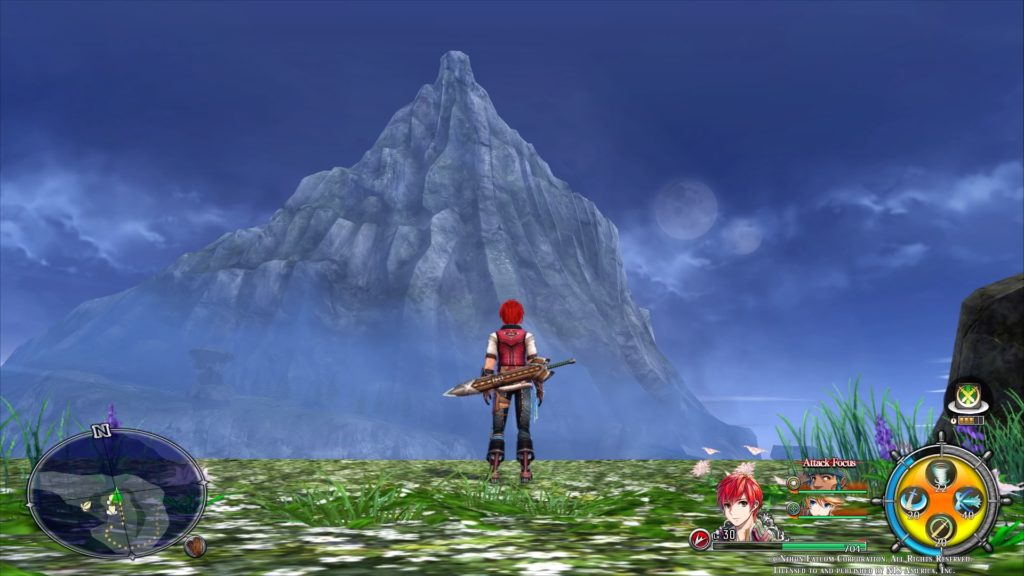 Every time a subsection is entered all the mobs in that area respawn. Unless you are trying to grind out levels it’s worth clearing a whole subsection before moving on to the next. This gets a bit problematic when a subsection has multiple entrances and exits. The mini map does a good job of showing where a subsection was entered but the larger map doesn’t even show the subsections at all. There’s also no way to mark or make notations on the map which could often cause issues with remembering what parts of a map I still needed to explore, particularly when I would have less than 5% of a map left to explore.

Combat in Ys VIII is a lot of fun and lives up with the action combat design very well. Skills can be assigned to the Square, Triangle, Circle, and X keys as you like but only four skills are available at any given time. Each skill has three aspects which are graded from A to D with S being the best. This system made telling which skills were better than the others simple and clear. Additionally, every time a skill is used XP is gained for that skill and it can level up and be improved until they reach their max skill level. Different skills also will affect different mobs in different ways. For example, one skill Adol has creates a tornado which was particularly effective on any flying mob. I also like the fact the player is rewarded for using skills in creative or smart ways. For example, killing an enemy while it’s in the air grants extra experience and if an enemy is killed with a special skill you regain half of the skill points used.

During the game, some of the castaways who I found had the ability to join my party. The way this is handled in the game is only three characters can be “active” at any given time and the rest will be set to “standby”. However, for the purpose of the game, the characters who are on standby are still considered to be with you and as such will show-up in cutscenes and still earn experience, although at a reduced rate. The active party members are the ones who are actively fighting and can be switched between freely during combat. 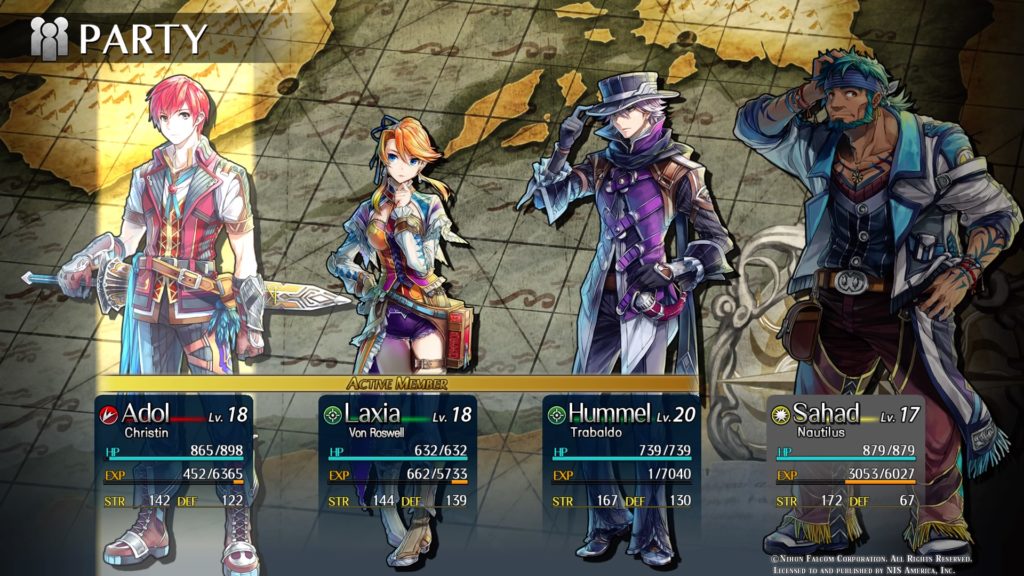 There’s a bit of meta game which can come into play because each party member deals a specific type of damage: slash, pierce, and strike. Stacking the same type of damage grants a damage multiplier to the overall damage output of the group but also can make fights against enemies with a weakness to the damage type you don’t have in your group more difficult. Having each type of damage represented in your party with no duplication increases the odds of rare drops. This is particularly useful in when trying to complete some of the side quests for the castaways because they often require rare materials.

There are also two abilities which can be triggered by evading attacks from enemies: Flash Guard and Flash Move. The timing for both is incredibly precise and required me to really pay attention the animations to correctly time things. Flash Guard is triggered by using R1 to block an enemy attack which would have hit you, and it literally must have been right about to hit and grants a small window of time where all hits will be critical hits. Flash Move is triggered by dodging an ability right before it lands and give the player invulnerability and increased movement speed. These effects can also be triggered one right after the other to stack the bonuses.


The only area of the combat where I was disappointed is the implementation of the extra skill. Extra skill is an ability which is charged up by hitting enemies with skills. None of this charge is lost between fights and it can often take multiple fights to fully charge the bar. The part I was disappointed about was this is a prerendered scene which just plays when the skill is used. There’s nothing I had to do at all during this part, just trigger the ability and then sit back for a minute. There is an option in the menu to turn this animation off but that still just automatically deals the damage. It would have been nice to have a quick time event or something for these skills to keep the action feeling going.

Overall Ys VIII the Lacrimosa of Dana is a compelling and entertaining JRPG. I often found myself torn between pushing the main story forward and doing all the side activities, but the real tell was I just really enjoyed spending time in the game no matter what I was doing. The graphics, music, and game mechanics all work well together to provide many hours of delightful and fun entertainment.

Note: Ours was a PC copy, provided by the PR team. 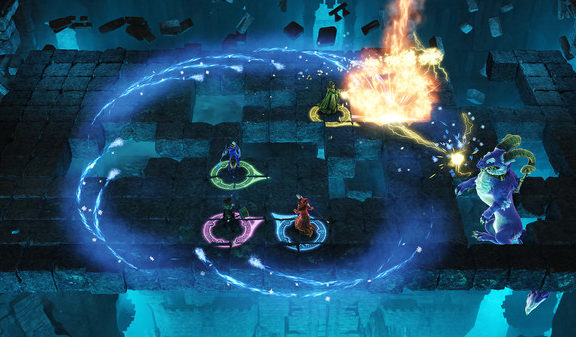 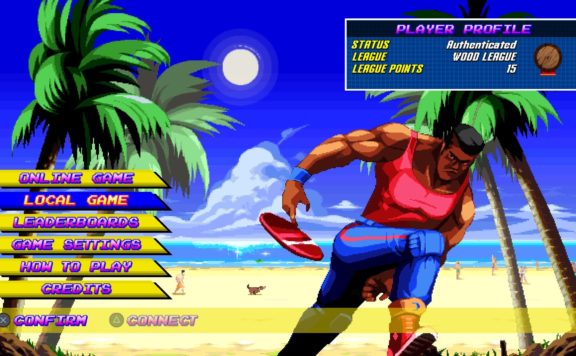