ARMS aims to do for boxing what Mario Kart did for go-kart racing and Splatoon did for the first person shooter. Take well-known concepts, sprinkle in some of that Nintendo magic to the mix, and end up with a concept that is entirely their own, original, and most importantly fun. Nintendo holds true to their track record with ARMS and delivers on this formula. This is our ARMS review.

For all those games that Nintendo magic starts with larger than life, loveable characters, even if they are small in stature. From Mario and Link in the early days to the Inklings of Splatoon and now Min Min and Twintelle of ARMS. Add in a vibrant color palette; dark purples, bright greens, neon orange, and now neon yellow. Then capture the fun of the core gameplay loop and add variety to it. Finally polish, polish, polish with meticulous attention to detail. This ensures such little items as the fans in the stands that make up the crowd wearing branded apparel of their favorite fighter.

It is easy to look at the vibrant colors of ARMS and the frivolity of the fighters and dismiss this game as for a younger audience. But do so at your own peril. While it’s true that ARMS may attract those gamers with its charm it has been designed for newcomers to the fighting genre and experts alike. Also don’t be scared away by the motion controls. They can be fun but they are not required, in fact, you can completely ignore them. If you are trying to fight competitively either locally or online, you will be best served by using Joy-Cons in their horizontal form or the pro-controller. 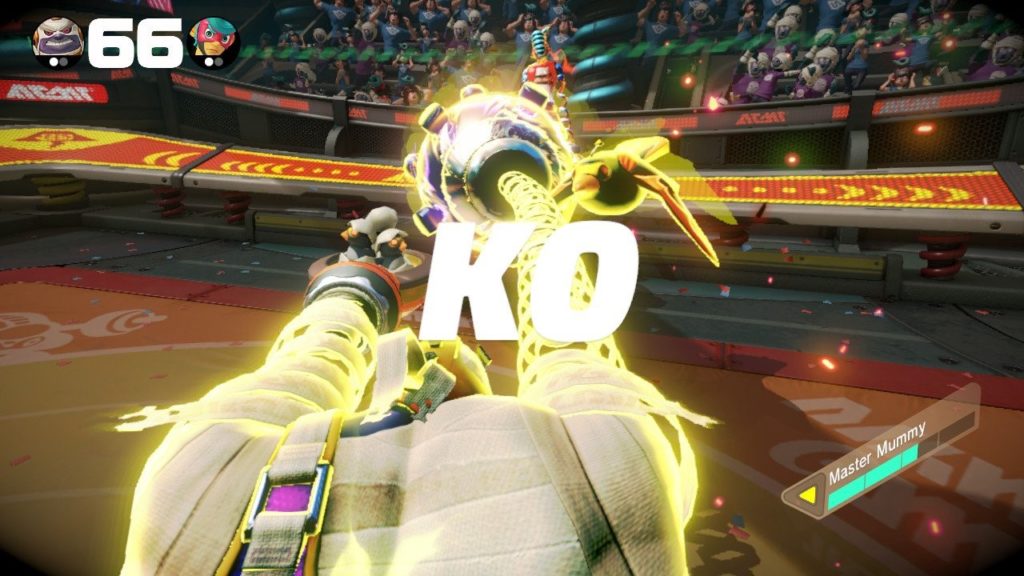 There is a range of fighters that each have their own unique style of fighting. Master Mummy is a big heavy fighter than can heal while he shields himself on the defensive. Byte & Barq, the clockwork cop and his K-9000 assistant, are a lighter fighter combination than Master Mummy with quicker attacks that deal less damage. You’ll have direct control over Byte but Barq is on his own program and helps you out where he can. Early community favorite Twintelle uses her curls to her advantage. Instead of having boxing gloves on springs launching from her hands her weapons are attached to her hair that she can last out at opponents.

Each fighter also has access to a variety of different gloves. While some gloves resemble a normal boxing mitt, others are heavy balls, shields, boomerangs, missiles, lasers (yes, lasers), and slap mitts. To further add to the strategy these gloves can have an elemental affinity which gives them an additional strategic difference; fire to burn your opponent, ice to slow them down. You can have your fighter loaded out with three different types of gloves going into each match. Before each round, you can pick which two you will use. They do not have to match. You can use a different glove on each appendage. You’ll also be able to swap gloves between rounds so if one set doesn’t work the first time you can give it a go with a different set the next. But so, can your opponent. It’s a bit of a cat and mouse game on which gloves you lock in on.

As in real boxing, it’s not just about throwing punches. It’s about footwork and moving around in the ring. ARMS captures that as well. The more advanced you get the more important strafing side to side and jumping become. Mix in the ability to grab your opponent with two hands and slam them to the ground, on top of the ability to punch your opponent’s punches out of the air and ARMS can start looking more like a chess match than a fist fight. 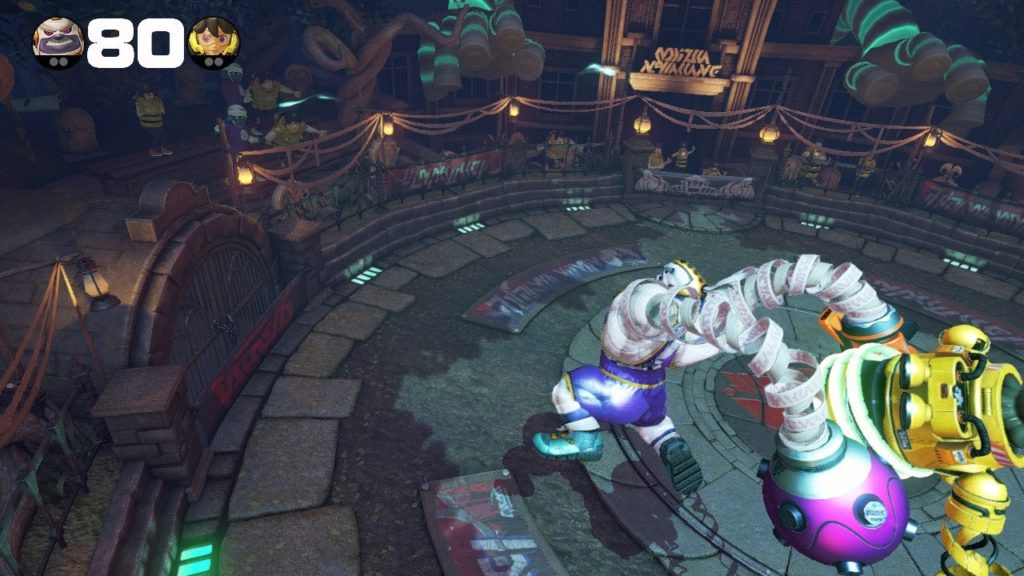 ARMS does an excellent job of getting you started in the game by breaking down the basics of the controls. However, it feels like a stumble that it doesn’t dig deeper into the nuances of individual gloves and their abilities. It does perform admirably on explaining each game mode though so the issue with the gloves tutorial is the exception and not the rule.

Another place where ARMS has room to improve would be with local multiplayer. Currently, with two players there is a vertical split screen. It would be nice to have an option to split the screen horizontally instead. The ability to view objects on your periphery is more important than being able to look up and down.

The Grand Prix, which can be competed in either single or two player mode, will have you take part in 10 matches to become the Grand Prix champion. You’ll fight against random opponents along the way to fight the current reigning champion. Not all the matches will be fights. Some will also be V-Ball, Hoops, or Skillshot. You and the other fighter will play Volleyball with a bomb in V-Ball. Try not to get blown up. In Hoops, you’ll play basketball but instead of shooting the ball you’ll attempt to shoot or dunk your opponent in a hoop. Skillshot will have you striking targets attempting to break them before your opposition and achieve the high score. You’ll also box from time to time. These additional fighting modes are fun and help break up the routine of best 2 out of 3 toe to toe fight competing for the Grand Prix crown. There are 7 levels of difficulty to the Grand Prix starting at fairly easy to really hard. You’ll have to complete the Grand Prix at rank 4 with a fighter to open up ranked matches. 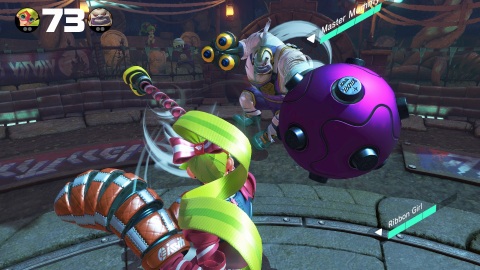 The long term draw will be the Party Match, and Ranked Match modes. Party Match groups you in a lobby with other players and you’ll take turns competing in the different modes. The game will randomly decide if you paly V-Ball, Hoops, Skillshot, or Fight. You’ll also get grouped up for 2 on 2 fights with a random teammate even if you queue solo. There are even 3 players versus 1 CPU fighter coop mode. Win or lose you’ll earn in-game currency that you can spend on purchasing new gloves for your fighters. In fact, you’ll earn currency for all the gameplay modes in the game. Spending time in multiplayer I was having fun even when I got my butt kicked but it made victory that much sweeter when I finally won a match. Which I swear, I did eventually win a match.

ARMS staying power will depend on its ability to form a community around this punchy little title. Currently, Nintendo has plans to release additional stages and fighters for free. This DLC will help the title keep its legs underneath it while the Switch install base grows and the ARMS community grows with it. The early success of the Switch and the level of detail that Nintendo has crafted into ARMS assures that this is a great franchise with huge potential for growth that is fun for newcomers and veteran fighting game fans alike. 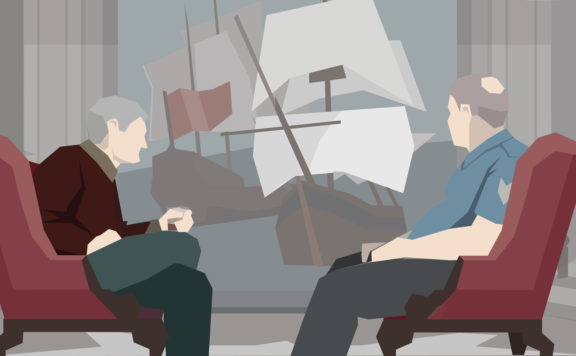 ARMS aims to do for boxing what Mario Kart did for go-kart racing and Splatoon did for the first person shooter. Take well known concepts, sprinkle in some of that Nintendo magic to the mix, and end up with a concept that is entirely their own, original, and most importantly fun. Nintendo holds true to their track record with ARMS and delivers on this formula.
0
Average User Rating
0 votes
Have Your Say!
Your Rating: 0
Submit
Write A Review
Genre:Fighting
Rating:Everyone
Developed By:Nintendo
Publisher:Nintendo
Modes:local competitive, Online, Single-player