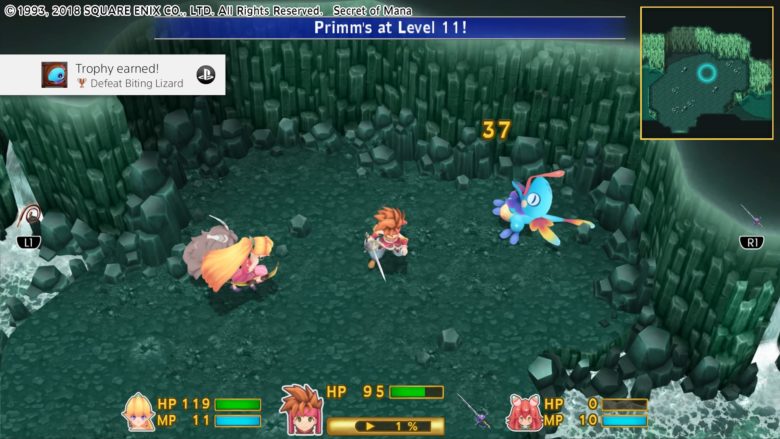 In case you have been holed up in a biodome with your Y2K survival kit, Square-Enix, beloved bestower of classic RPGs like Chrono Trigger and the Final Fantasy series, announced back in August that it would be remaking one of its mid-90s smash hits, Secret of Mana. We have clamored and we have waited and we have bitterly fought each other over this game these long six months. Now, the advent of Secret of Mana is upon us and I am here to tell you in this review that it is a faithful recreation of the original… and why you’re probably not going to like that.

But, first, a story:

In 2005, I had the best pizza of my life in the city of Split, Croatia. It changed me, opening up my mind to the possibilities of what a pizza could be. This experience forever shaped every other experience of pizza that I would have from that point forward. It was like I was experiencing pizza for the first time in that moment.

“What the heck does a thirteen-year-old experience with a pizza have to do with this game,” you may be thinking. I am so glad you asked. I’ll let you know by the end of this review.

The Secret of Mana Remake brings the classic title to PlayStation 4, PS Vita, and PC with updated 3D graphics, a remastered soundtrack, new story cutscenes, and a full voice-over cast for retelling its iconic story. The game mechanics have also been tweaked with a few modern conveniences. We’ll break these updates down and talk about them in more detail. Let’s begin with the story.

In case you have forgotten or never been exposed to what that story is, Secret of Mana follows the unwitting adventures of Randi – a mysterious orphan exiled from the village that took him in, Primm – a royal socialite with the hots for the captain of the guard, and Popoi – an androgynous Sprite child with sass for days. While fate brought them together, along the way they discover an ancient weapon drained of its power said to have sealed away an ancient evil, elemental forces to be harnessed, and an empire’s plot to resurrect a fortress capable of waging war on the gods.

To assist with telling this story, the Secret of Mana Remake uses its updates to bring a little bit more depth to the experience. The vignettes are a nice touch. Whether it’s iconic moments like meeting Gemma for the first time or sitting down at an inn to discuss the events of the day before crashing out, these add another dimension to the experience which had been limited by the confines of the original SNES release. 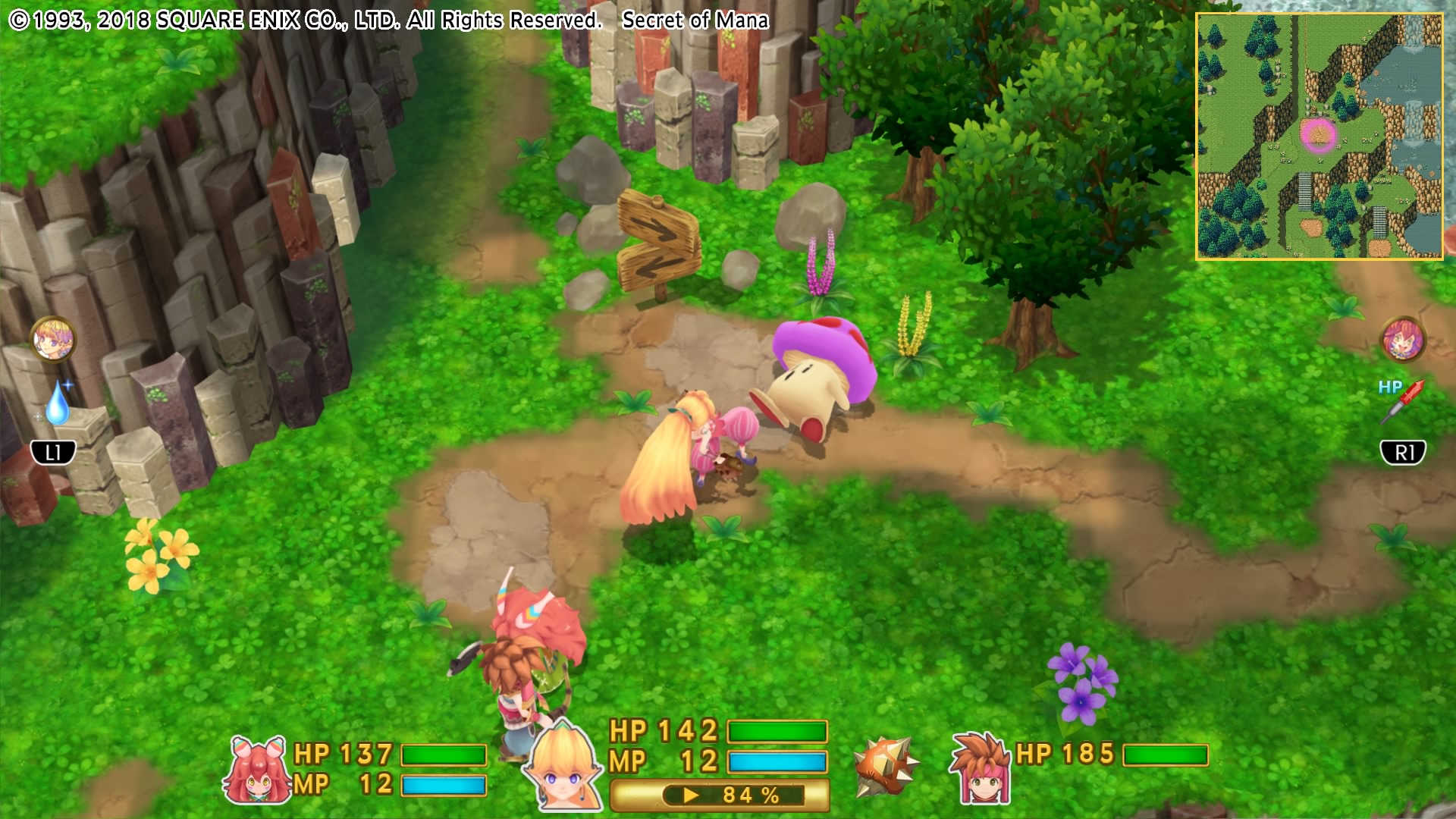 As far as the voice actings goes… it’s rough… really rough. At least, in English it is. That being said, there is something worth taking into consideration. The dialogue in this era was often written as “over-the-top” to sell what was missing in vocal inflection – much like an English dubbing of an anime. The crux of this matter is that now these “over-the-top” lines are being recorded in the same voice they were written in, making it feel forced or unnatural. However, if the lines were altered to fit more natural conversation, it wouldn’t stay true to the source material. I am willing to tolerate it because of what it is. There is a certain suspension of expectations that you need when revisiting material like this.

Where the Secret of Mana Remake fumbles with the voiceover work, it makes up for with the remastered soundtrack. The score is true to the original works and where liberties are taken, they are often welcome liberties. If you don’t care for the remastered track or want to hear the original next to the remastered, there is an option within the system menu to switch soundtracks. This is a very nice touch for nostalgia trips of all kinds.

As far as gameplay goes, again, the Secret of Mana Remake is faithful to a fault to the original source material with only minor quality of life updates. Each character still has their own charging attack meter, charged attacks are still painfully slow, and you can still get stun-locked for days. However, the experience gained for weapon and magic experience points (which are earned through usage) seem to be earned at a much faster rate than the original and casting times seem much faster as well.

Options have been added to streamline the menu experience including the ability to hotkey two spells, items, or weapons to the L1 and R1 buttons! Armor equipment is now taken care of within its own menu and the old grid system is removed in favor of a more sleek setup. If you aren’t familiar with it, the old grid system allowed you to program your allies’ attack patterns to be more offensive or defensive. Now, you can simply program your allies to attack your target, the targets of the other ally, or to attack enemies that have not yet been targeted. 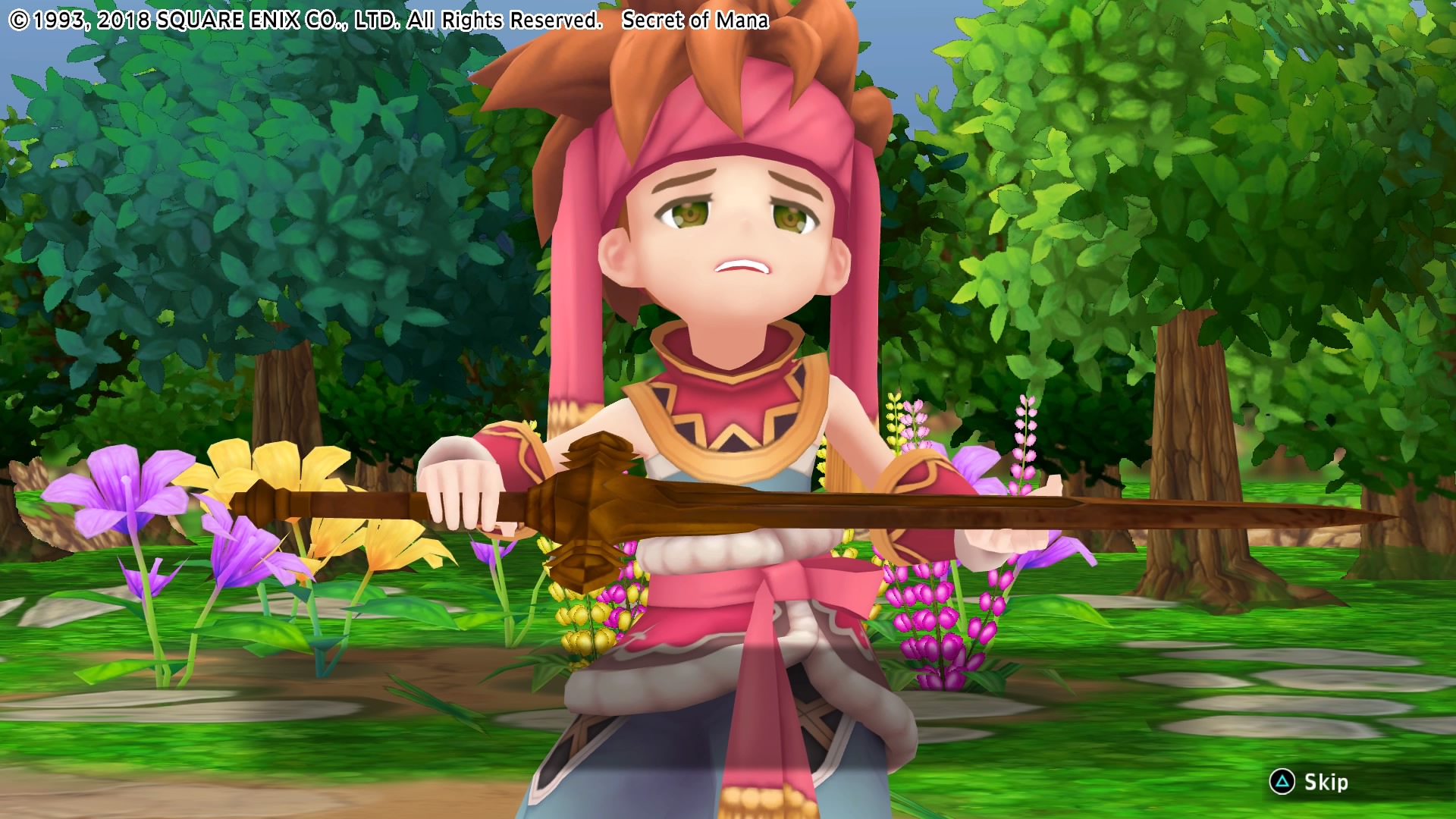 But this is where the wheels begin to fall off.

Opening the menu again will not return you to your previous menu selection like the original. This bogs down gameplay by sifting through your allies menus to find the spells you were working on. It’s not game breaking but slows down the pace of a game that is already slowed by attempts to stay ahead of the magic and weapon experience curve.

What is game breaking, however, is a lack of update to inventory space. While consistent with its doppelgänger, one of the most infuriating parts of Secret of Mana has been the limitation of consumable items. You can only hold four of each. Where this is game breaking is in the early game when you are dependent on candy for HP or Cup of Wishes to resurrect your dumb, low level, AI character that went gleefully galumphing to their death for the third time in a row. I guess Secret of Mana proves that there are limits to how much you can heal stupid.

Graphically, the art style carries a similar whimsy evocative of the color pallet of the original. It’s bright where it wants to be and takes darker tones when it needs to. Without digging into the development cycle of the game, if I were to guess by the quality of the graphics, I would guess that this was originally created with the Vita in mind and the port to PS4 and PC were an afterthought. It certainly is not an ugly game, but it doesn’t seem like it is too taxing on the Playstation’s system resources. Then again, I did have the game crash on me four times at random. Thankfully, there is an autosave… a fantastic modern convenience, but I wouldn’t lean solely on it. 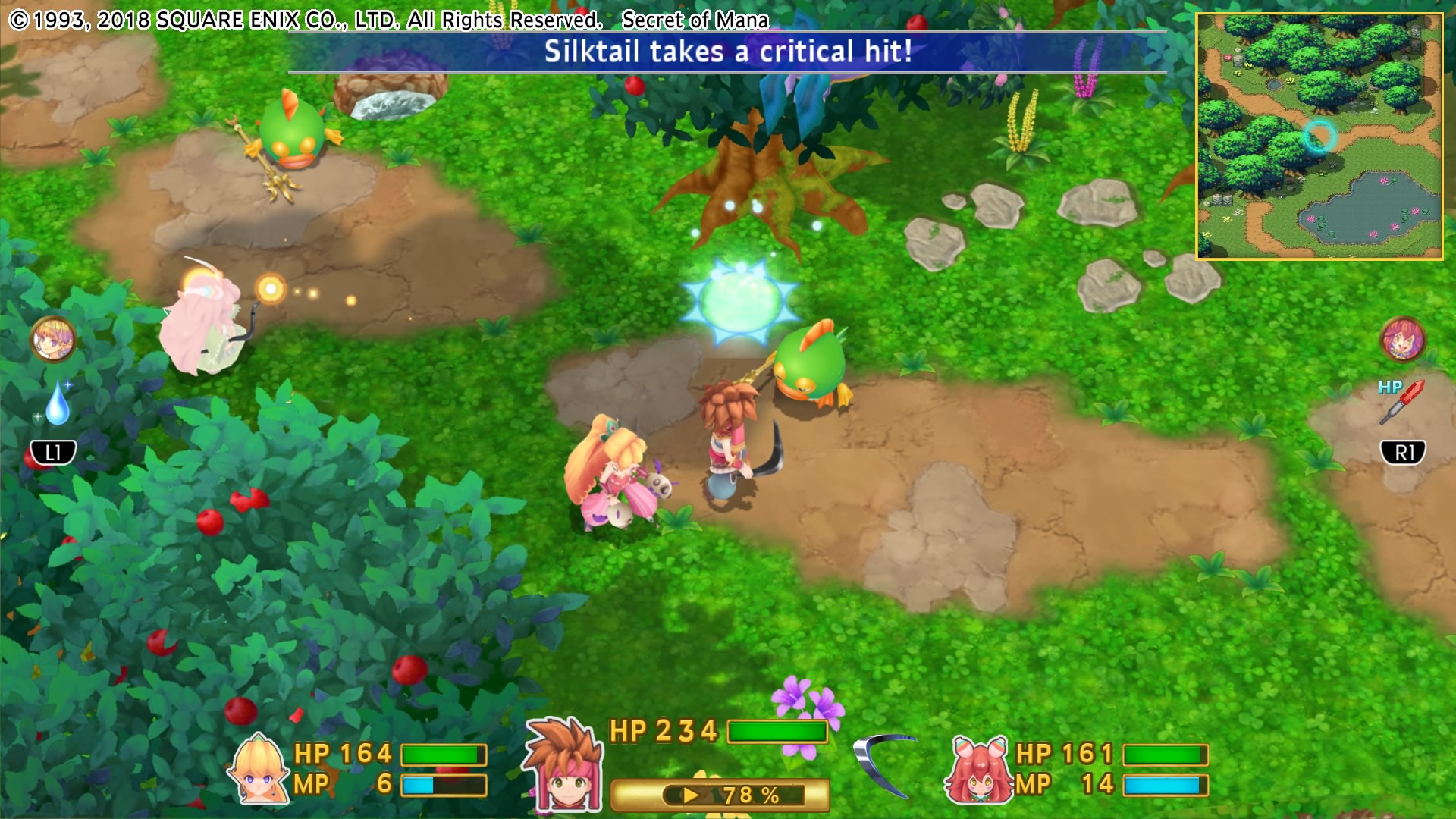 What I am going to suggest to you may send some of you into a frothing tizzy, but someone has to say it: I think that the Secret of Mana Remake is a faithful recreation of the original in the sense that it is just as flawed and imperfect as the original.

The Secret of Mana Remake is a lot like that pizza I talked about at the beginning. For many of us, the 1993 original shaped our understanding of what an RPG could be. It threw off the conventions of Square-Enix’s prior formula of turn-based tactics for a more action-oriented play style. Sure, the menus still existed and the standard RPG components were in place, but command panels were replaced with a rotary menu and you could actively dodge physical attacks.

Much like that pizza, it was still made like any other pizza I was familiar with- similar parts but with a distinctly different flavor profile. Games like Secret of Mana (in their original experience) impacted our growing pallet for games with a formative experience. We are far more forgiving of the originals’ missteps than we are a faithful recreation… even if it errs in the same places. Chances are, that pizza was probably not that great or it wouldn’t live up to my standards of it if I were to go have a slice of it today.

The Secret of Mana Remake is a great game if you want to experience a classic, formative RPG without having to find a SNES Classic or Virtual Console. It is the foundation that many, many gamers cut their RPG teeth on and inspired a great number of games to follow it. It is a foundational piece of our history and should be appreciated for what it is, not excoriated for what it isn’t.

Even with its grating voice acting, grindy weapon and magic leveling, and occasionally frustrating moments in combat, the Secret of Mana Remake is like a slice of pizza… even when it’s bad, it’s still pizza… and I can’t be angry at that.

COMPARE TO: Legend of Zelda: Link to the Past, Terranigma, Chrono Trigger

Written by
Damien Gula
Born in the heyday of mullets and the El Camino to a tech-foward family, Damien (a.k.a. Dame, PastorDame) quickly embraced the reality that “normal” is just a setting on a dryer. Damien is a pastor by trade and loves talking with anyone who is interested about life, God, and video games (in no particular order) - so, much so, that he and fellow MMORPG/GameSpace writer Matt Keith (Nexfury) create a podcast dedicated to that conversation. At the end of the day, Damien is a guy who loves his wife, his Mini Schnoodle, and crafting gourmet bowls of Mac N’ Cheese.
Previous ArticleAge of Empires Definitive Edition: When Old Becomes NewNext ArticleSwery and Arc System Works Unveil The Missing