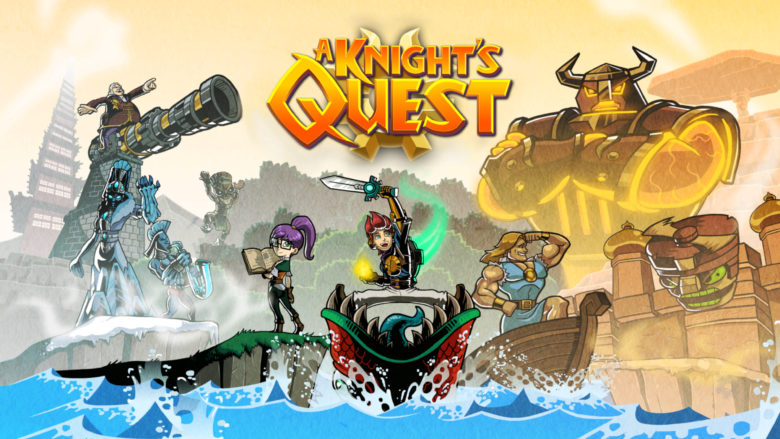 A Knight’s Quest, a game by Curve Digital and Sky 9 Games, is at first glance a delightful action-adventure experience, the opening sequence gets you quickly hooked into the game and Rusty’s adventures with a high action set of events. Unfortunately, once you get a bit further into the game a few issues hold it back from being a great experience. This is our A Knight’s Quest for PC/Epic Store review. 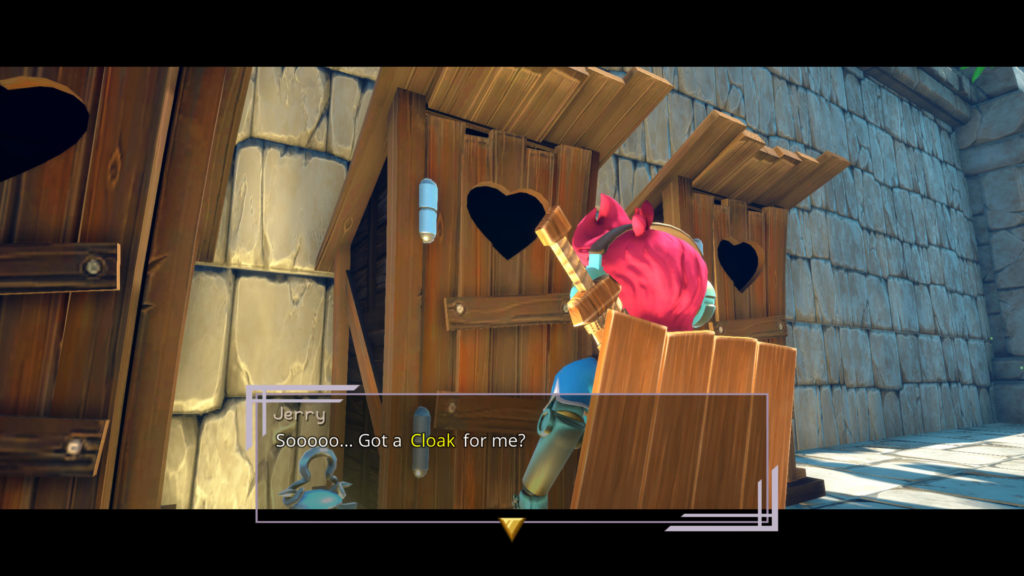 If you are planning on playing A Knight’s Quest there is a couple of things you should keep in mind. First, for parts of this game, you will need to turn your brain off and just roll with it. You play Rusty who has a metal arm and wears headphones to communicate with Valy. Because of a world-ending problem, Rusty creates, he is on a quest to find the legendary Spirit Knights. This is a fun lighthearted adventure romp through a world that doesn’t make a lot of sense. Second, if you are not a fan of at least some juvenile humor then this may not be the game for you, for example, early on you find someone in an outhouse who is out of toilet paper and needs you to find him a cloak.

With that out of the way, what does the game get right? While it did take me a bit to get used to, I ended up loving the art style, it reminds me of games from an earlier era. The in-game music was also a high point for me, I found it relaxing and enjoyable which added even more to the charm of the game world. Just running around exploring the nooks for items and slimes, yes slime collecting is a thing and they sing. Even the distinctive twangy tune from the slimes was not annoying enough to stick in my head, on loop, but it is catchy enough that you will always notice when one is nearby. The sound effects of enemies were also a lot of fun in a goofy kind of way… I am very curious to know if the developers just sat around recording themselves to make the enemy sounds effects or if it was more carefully planned out. 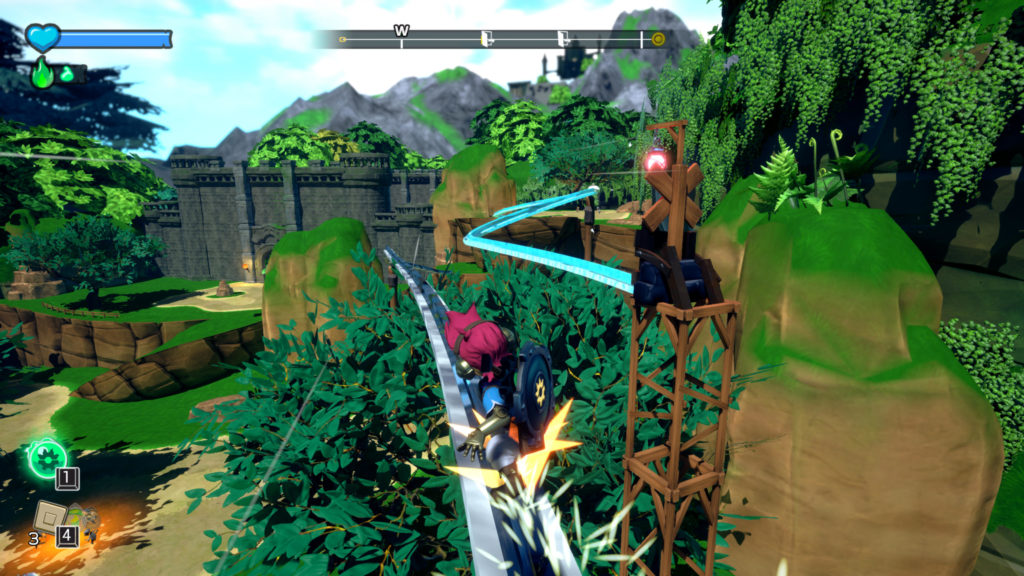 Movement in the game is great, platforming is responsive and the wall running works well. At times I found that the ledge grab animation was a bit off, but still acceptable. Once you get access to the grind boots for rail sliding, which takes some getting used to, it ends up being a lot of fun if you can get used to keeping your balance on the rail. Puzzles in the game are challenging at times but not impossible so you always feel like progress is being made. 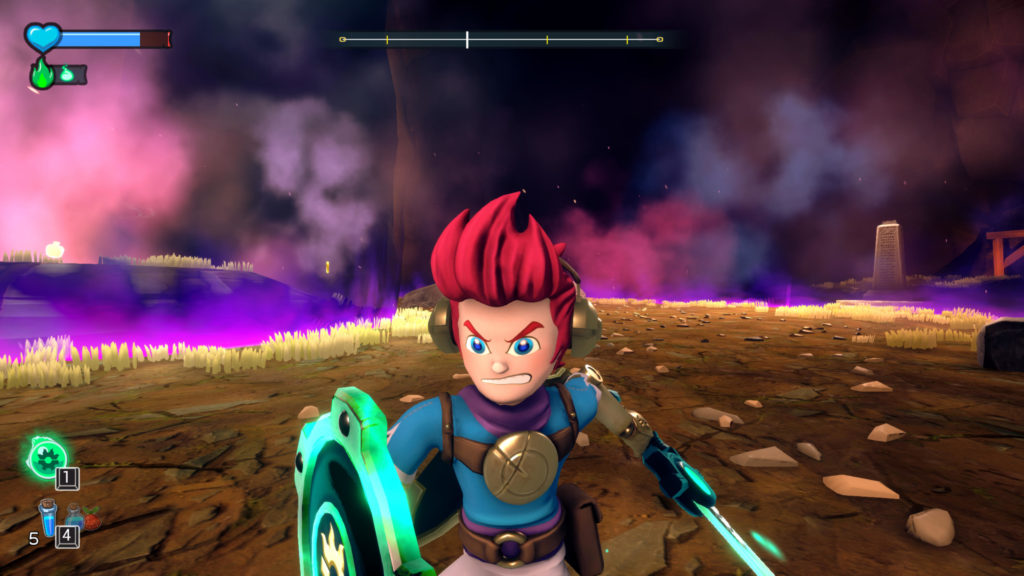 The combat, unfortunately, is only mediocre at best, when Rusty’s attacks hit the enemy it just doesn’t feel like there is any impact, charging up your weapon is a pain and using right-click or the appropriate gamepad button to lock onto an enemy was just a waste of time when compared to attacking normally. After the first couple of hours, I started running by enemies whenever I was able to unless I had to reflect attacks and clear a platforming area. 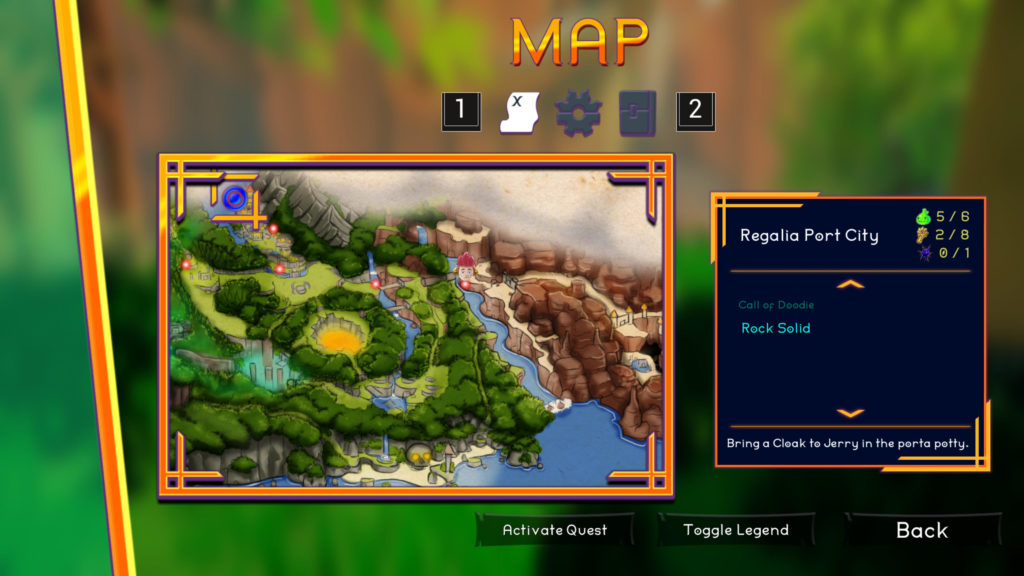 I have mixed feelings on the level design as well. Much of it is great and the jumping obstacles have been challenging. Traversing the world is fun but sometimes very confusing on what direction you are meant to be heading in. A system to provide the player with hints or an in-game directional arrow would be amazingly useful. Currently, all the player has for guidance is the map with a quest dot and an active quest dot on the compass, the map looks great but is not very detailed or helpful. There was also at least one point where I had no indicators on the map or compass, no active quest to click on for tracking in the log and had to figure out where to go next to advance the story. I ran into a similar design issue with one or two quests, early on in the game when you pick up a mining quest you are given a pickaxe with limited uses… but there is no indication of how or where you can get another one. I didn’t run into very many bugs while playing but the occasional one that did appear were glaring, like getting stuck on a bit of terrain for a minute or two. Also, you cannot save your progress manually, you need to reach a save point or transition to a new area. While the lack of manual saves doesn’t bother me, I know for some players it may make a difference. 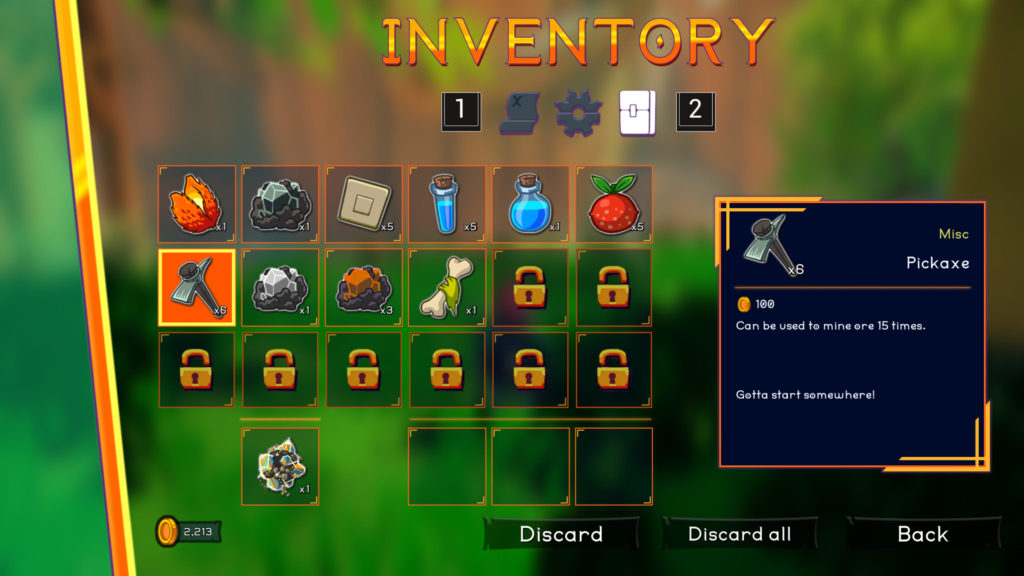 Tooltips and tutorials in the game leave a lot to be desired, some are useful, while most you can do without or are completely missing. Much of it can be figured out on your own, but it would be nice for a new player to have a full guide/tutorial on navigating the map, collection and inventory screens. Only through trial and error, I found out that by looking in my inventory I could see what various items did.

A Knight’s Quest is a good game and quite a bit of fun. If you are looking for a new platforming adventure with some humor and a lot of charm it is a solid choice. Unfortunately, it’s mediocre combat, at times mildly frustrating level design, and the odd in-game bug mar what would otherwise be a great experience.

COMPARE TO: Legend of Zelda Series

Tags: A Knight's Quest, adventure, Curve Digital, pc, review, Sky 9 Games
Summary
If you are ready to take on the role of an aspiring knight with questionable decision-making abilities, then A Knight’s Quest may be the game for you. Overall it is a good game with a lot of charm set in a generic world. Unfortunately, mediocre combat, at times mildly frustrating level design, and the odd in-game bug mar what would otherwise be a great experience.
Good
Bad
7
Good

Written by
Kevin Chick
Kevin "Xevrin" is an avid gamer having started playing video games on an Apple III with the Wizardry Series and Questron before the age of 10. In junior high, he branched out into tabletop gaming with the release of D&D 2nd Edition. During his first year of university, Everquest was released combining both of his favorite activities.
Previous ArticleFootball Manager 2020 kicks its way to PC in NovemberNext ArticleDivinity: Fallen Heroes dies in development…for now 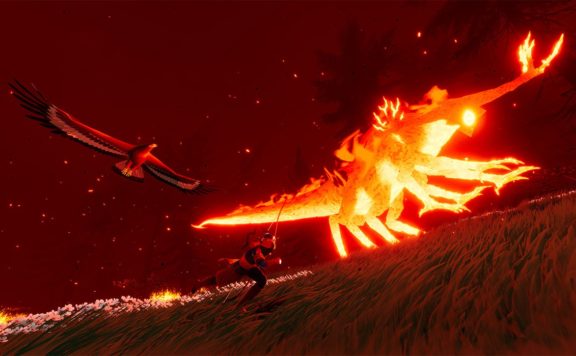 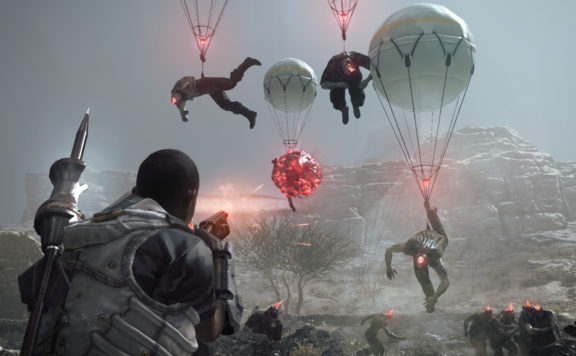 Where is our Metal Gear Survive coverage?
February 21, 2018