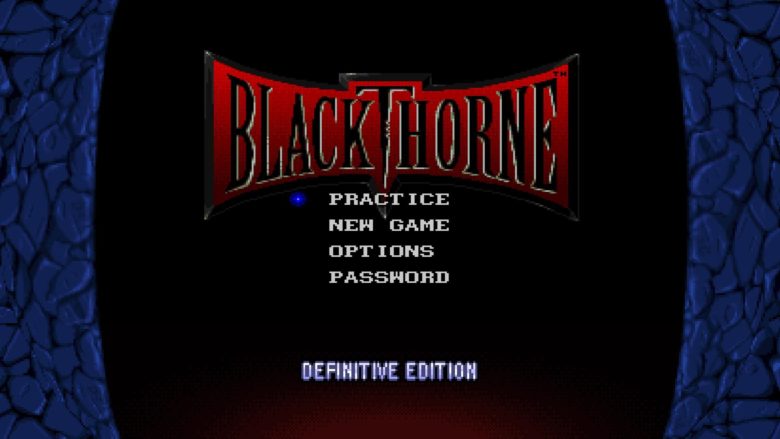 Welcome to part three of our review series on the Blizzard Arcade Collection. With both Rock n Roll Racing and The Lost Vikings conquered it’s time to move on to a very different classic. Blackthorne, a sidescrolling, action shooter, was originally released on SNES and MS-DOS way back in 1994. This dark and gritty platformer meets shooter takes players a much grimmer journey than any other title in the collection. How well does this almost 30-year-old title hold up after all these years? Grab that coffee, kick back and find out in our review of BlackThrone, part of the Blizzard Arcade Collection on PC.

Set against the backdrop of the alien world Tuul, Kyle “Blackthorne” Vlaros sets out on a mission to save his people and avenge his father’s death. Armed with a pump-action shotgun and the chiseled frame of a First Blood era Sylvester Stallone, Kyle will stop at nothing to see his mission through. Hell-bent on revenge against the great Sarlac, players will platform puzzle, shoot their way through a unique world featuring several themed areas.

Of the three titles in the Arcade Classic, Blackthorne is the only one I never experienced as a young whippersnapper. As such it was interesting and surprising to see how fleshed out the world and world-building were. Each area was uniquely themed and flowed well as I progressed through the game. 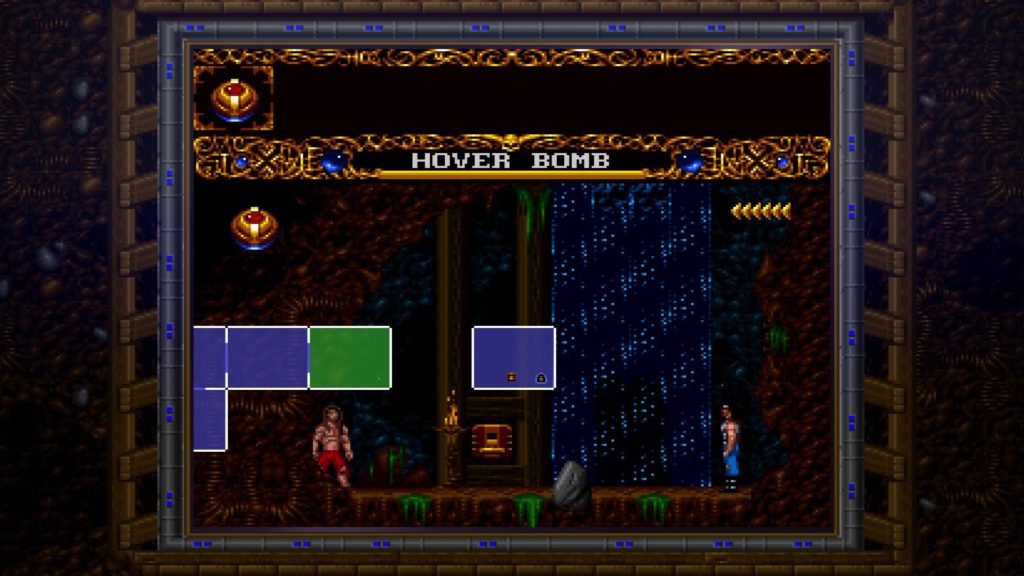 Progression is handled via a series of upgrades for your trusty boomstick and a simple inventory system helps create unique and engaging combat and puzzle experiences. As with The Lost Vikings and Rock n Roll Racing, Blizzard’s innovating approach to game mechanics and level design are present and accounted for here.

This Is My Boomstick

Combat in Blackthorne took me by surprise. I fired up the game assuming I would be playing a Duke Nukem II style run and gun platformer. If Duke Nukem II’s combat were checkers then Blackthorne’s would-be chess. In fact, combat is much slower than I thought it would be. This isn’t a criticism per se. It’s simply different than expected.

Blackthorne’s combat experience is really much more of a combat encounter or gunfight. Each enemy can mean death if you’re not careful. A unique “cover mechanic”, activated by pushing up on the joystick or keyboard, allows Kyle to press up against a wall, avoiding incoming fire. Enemies also benefit from this mechanic making each encounter trading of bullets. Timing and positioning are key to winning every battle. 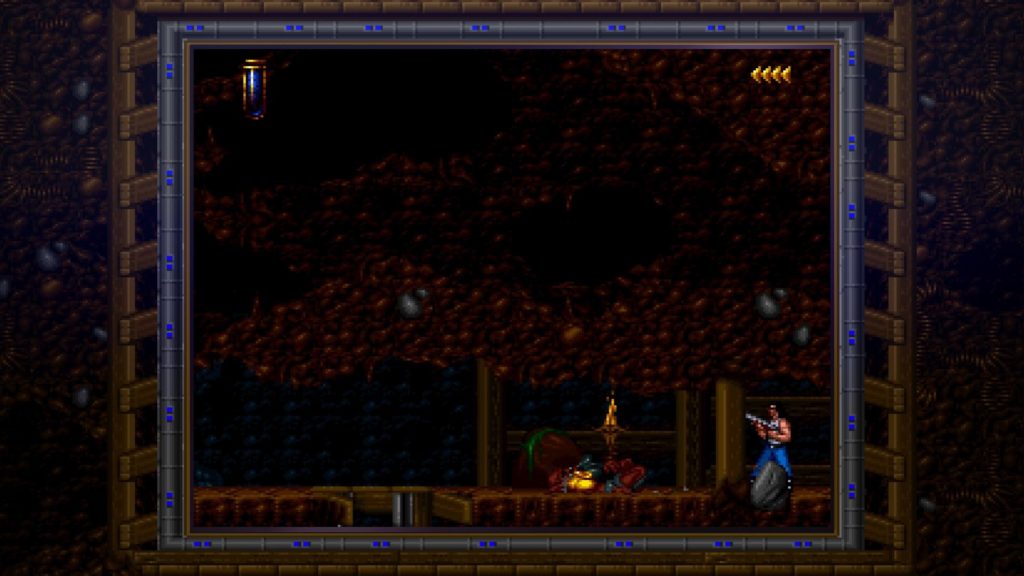 In many cases, you have to rely on observation and tooltips, which come in the form of NPC’s, to learn how to defeat your foes. This combat system becomes more dynamic when you add in items picked up from slain enemies. Hover bombs, potions, and wasp bombs are just a few of the items you’ll find along the way to aid in your mission of vengeance.

The Limitations Of A Classic

I have to say that for its time it’s a pretty in-depth combat system that requires some learning to really master. I personally found it a bit frustrating at times. This is mostly due to how complicated the controls are and how limited the technology was at the time. Your character actually has some pretty interesting abilities. Jumping, climbing, crouching, rolling, holstering weapons, blind firing behind you are all options in the game.

The challenge is that all of this was originally achieved on a controller that has fewer buttons than most modern-day mice. This means that the drawing and holstering of your weapon changes what each button does. Things like jumping with your gun drawn just aren’t possible. You also run into an issue of animation timing. Each movement and action has an animation that must complete before you can perform the next animation. 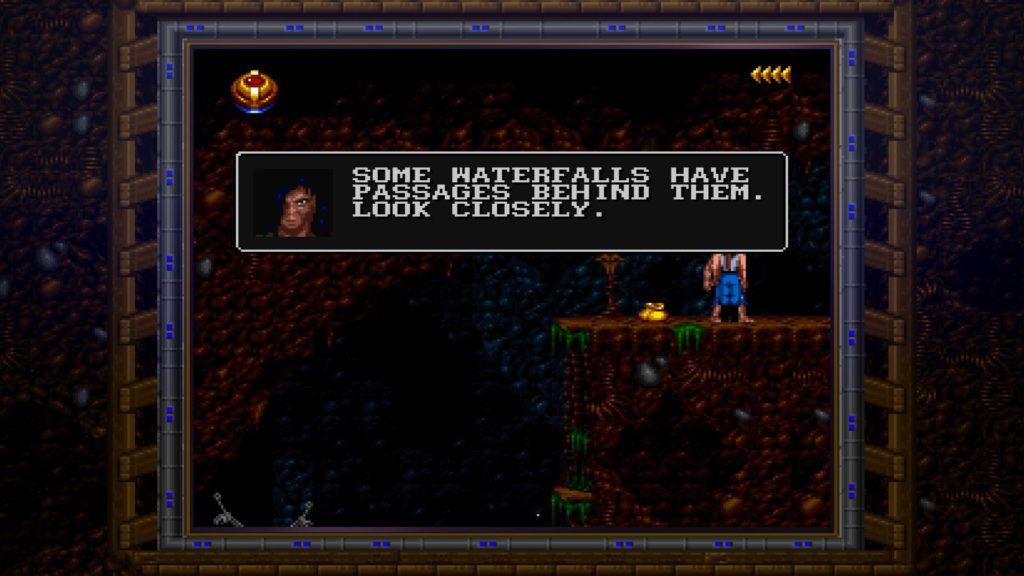 Back in the day, this was standard as the processing power of our SNES and GEN just couldn’t take much more than that. It’s all we knew and we loved every minute of it. For the modern gamer though this can feel like the game is lagging. Even now, as an old-timer, I found it hard to adapt back to those combat and movement systems. It’s not a deal-breaker but it will be a learning curve for newer gamers.

As with the rest of the collection, Blackthorne comes with the original SNES version as well as the Sega 32x version. This visual upgrade offers not only some sweet new visuals but a whole new zone for players to explore. Due to time, I didn’t get to play through both versions but the Sega 32x did look pretty sweet overall. There is also the definitive Edition that offers everything the SNES version has as well as an automap feature to help to navigate the world. All three versions come with the Arcade overlay menu for instant saving and control reference.

Tags: activision-blizzard, BattleNet, Blackthorne Review, blizzard, Blizzard Arcade Collection, pc, retro
Summary
Blackthorne is by far the deepest narrative-driven game of the three titles in the collection. It offers some rich world-building, unique settings and some challenging, innovative combat. Rough animations and movement, however, take some getting used to, especially for people who didn’t grow up on the titles. If your willing to stick with it Blackthorne is a great platformer that offers a unique take on combat. Priced at USD $19.99 as part of a three-game collection, you really can’t go wrong adding it to yours.
Good
Bad
7.5
Good