Have you ever desired a game with deep storytelling, colorful graphics, atmospheric music, and choices that matter? Mythic Ocean, from the three-person team over at Paralune, has all that and more. With this being Paralune’s first game, I am completely blown out of the water with how the studio has managed to balance simplicity and quality in the emotionally-driven game. If you’ve been on the fence and wanting to dive into a new narrative exploration experience, Mythic Ocean may be just the game you’ve been waiting for. This is our Mythic Ocean review for PC.

When conducting further research for this article, I was absolutely floored when I discovered that the team over at Paralune is comprised of only three people: Robyn Haley (Concept Artist, Illustrator, Animator), Darren Malley (Game Designer, Writer, Composer), and Matt Smudz (Programmer, Environment Artist). I’m not certain just how long it took the team to craft Mythic Ocean, but hats off to everyone involved for all of their hard work because it certainly paid off.

The story of Mythic Ocean begins by guiding you through a mysterious library of seemingly infinite knowledge. When you emerge, you find yourself in a vast, cosmic abyss, before stepping into the light and waking up in a new, underwater world. The eel, Elil declares himself as your guide and explains that this isn’t the first time you’ve met. In fact, this has happened several times before. Soon, a new world will be born, and you must choose its Creator. 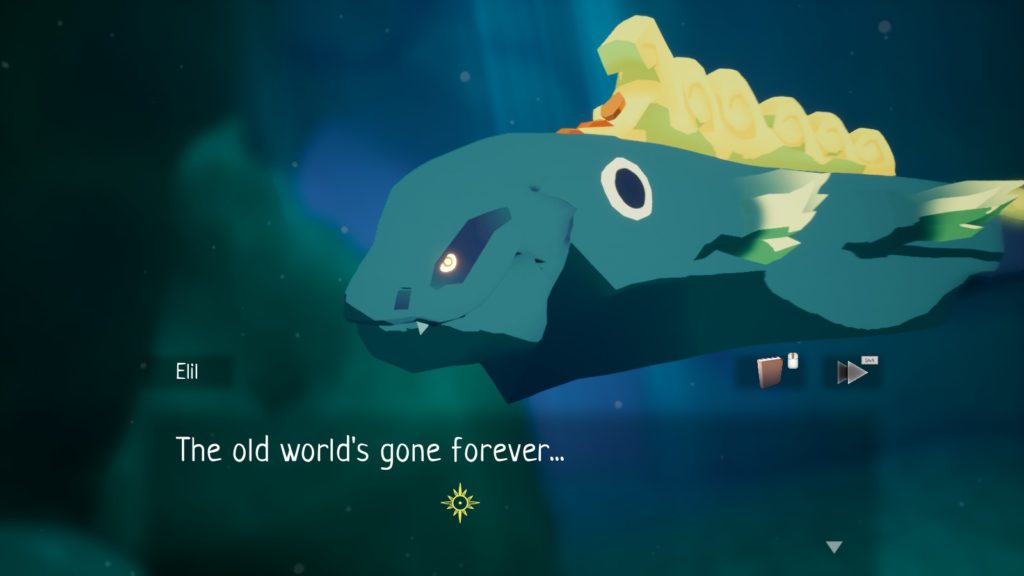 Your job, it seems, is to guide the gods of this world-in between and develop strong bonds with them, all the while coaxing them on the right path. An extremely clever addition to this story: the gods don’t have a clue about their divinity. 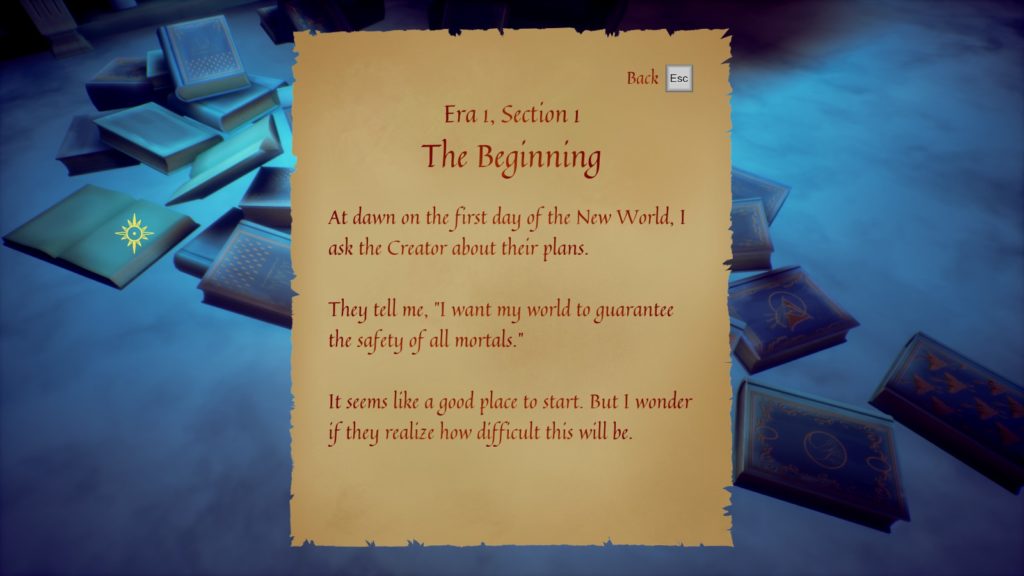 The first god that I encountered was a small larva with an insatiable hunger named Lutra. Immediately, I felt a strong emotional connection to this little water bug. At first, the cinematic that introduced Lutra was terrifying-even Cthulhu-esque in nature. 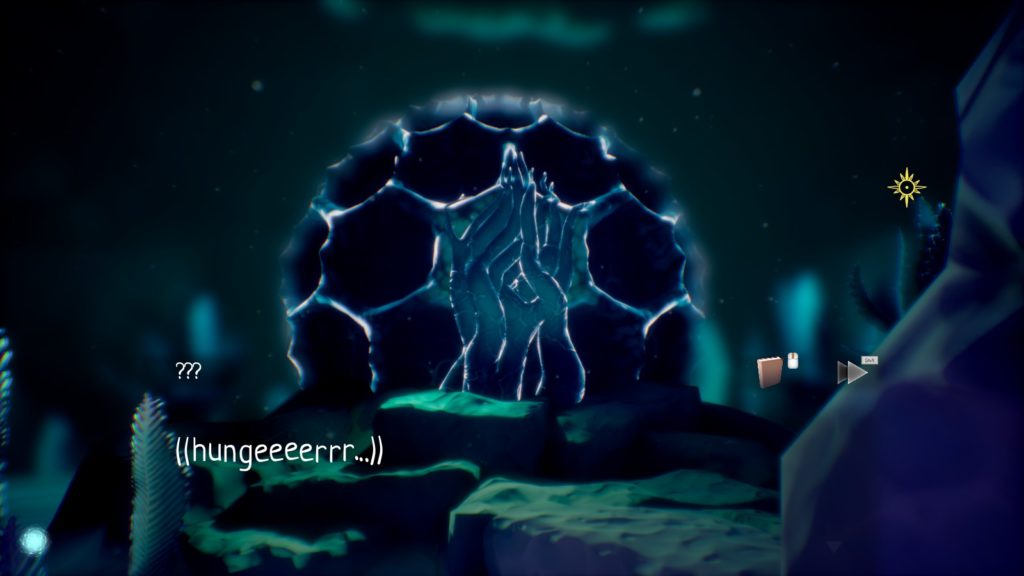 But in the next scene, this adorable little larva popped out of her astral pod to see if you were edible. As much as I wanted to let Lutra eat what she liked, her insatiable hunger was staggering and clearly would have proved a problem for the world she would create. Though she pouted for some time, through the convincing of her other new friends, she soon came to realize the merits of not immediately devouring all of the purple leaves within the cave. 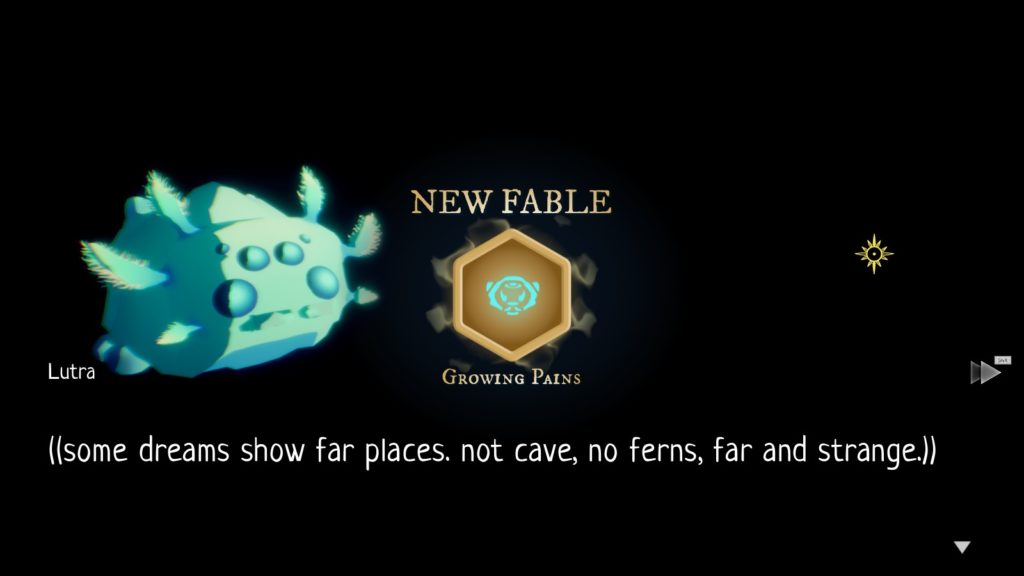 One of my favorite parts of exploring the deep undersea world of Mythic Ocean is its creative cast of side characters that populate the surrounding areas. There is a crab that breakdances, a pufferfish with metal face paint who wants to perform, a dolphin with selective hearing, and so, so much more. 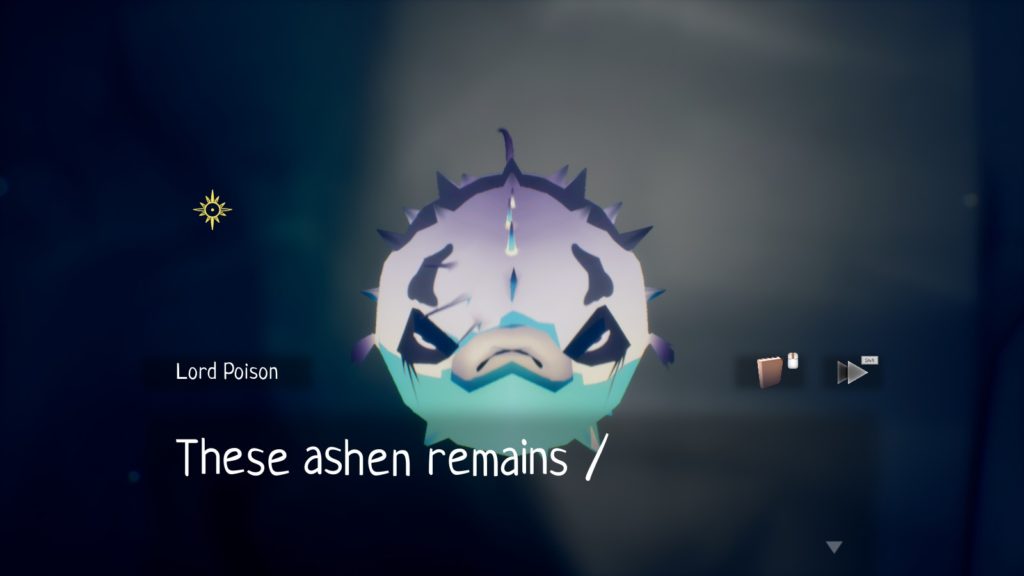 Not only are they interesting individually, but many of the characters you meet can be affected by your decisions as well and may go explore other parts of the ocean, vanishing from that zone and swimming to the next. Having trouble finding them? Mythic Ocean has a handy dandy sonar button you can hold down to locate your fishy friends. You don’t have to wait for a meter or resource to run out to use it. The creators absolutely understand that a large portion of their game is exploring, and they do not cripple you for indulging in it. 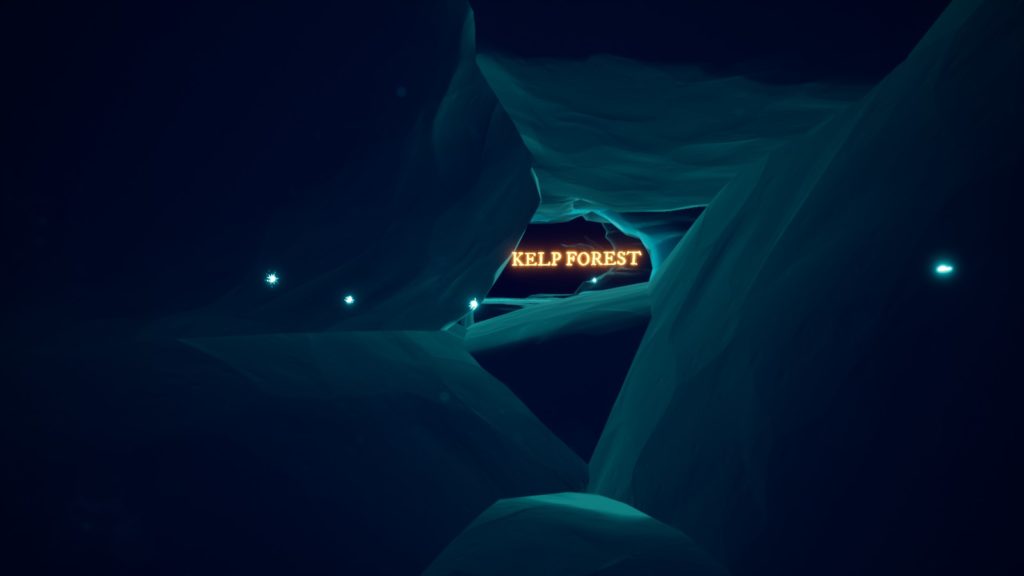 Though a tad small, the world of Mythic Ocean is nonetheless beautiful and enjoyable to drift through. Scattered around the waters are mysterious portals that take you to the cosmic library where you can collect pages of knowledge describing a previous world and how a controlling god ruled it. As a self-declared completionist, these pages acted as a great incentive to encourage me to explore every kelp leaf and crevice I could find for the mysterious portals. 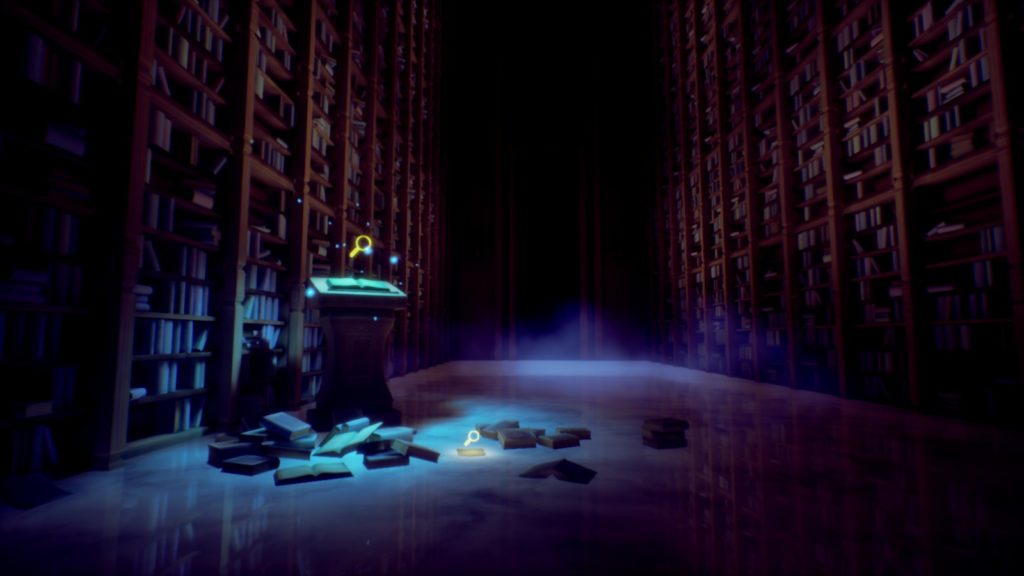 Music of the Ocean

One of the creatures you encounter is a little worm/snake-like thing that has some profound thoughts they share with you. One such makes reference to the music we hear throughout the game, and how it is the melody and harmony of all the creatures existing as one. Indeed, the music of Mythic Ocean is lovingly atmospheric and takes on a life of its own in between scenes. Paralune knew exactly what they were doing and choreographed every heartbeat of each musical score to lull you into a sense of peace, before pausing for dramatic effect or swapping tracks to drive home the effect of the scene. It’s this care for detail that was interwoven into Mythic Ocean that I feel really pushes it that much further and gives it a polished feeling. 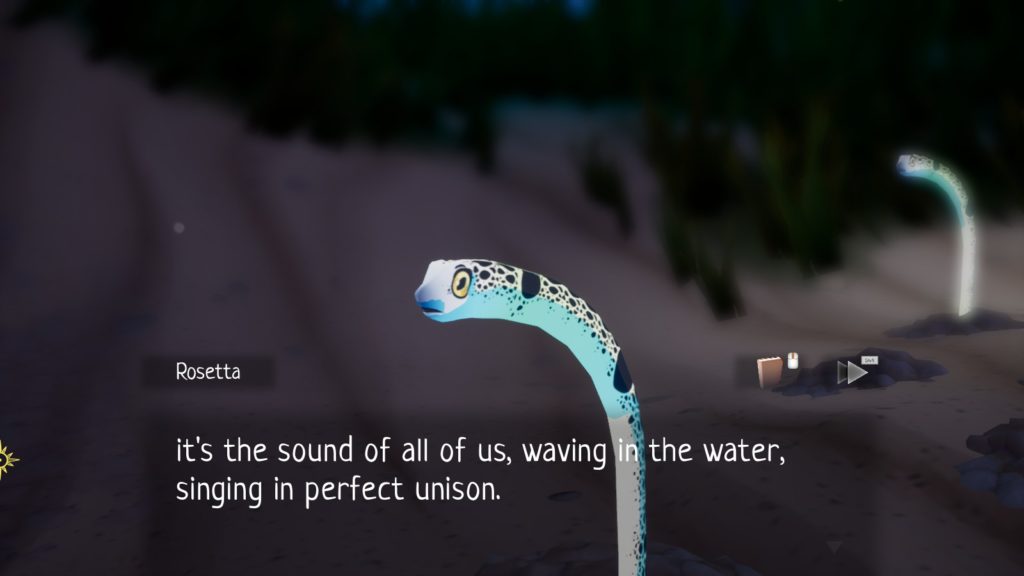 The End of the World

For the sake of spoilers, I won’t include the actual details of my ending, but I can give you my final thoughts on it. I’m not sure when exactly I became so wrapped up in these charming characters, but when it was finally time to choose a god to become the next Creator, my chest actually hurt to have to leave them all behind. 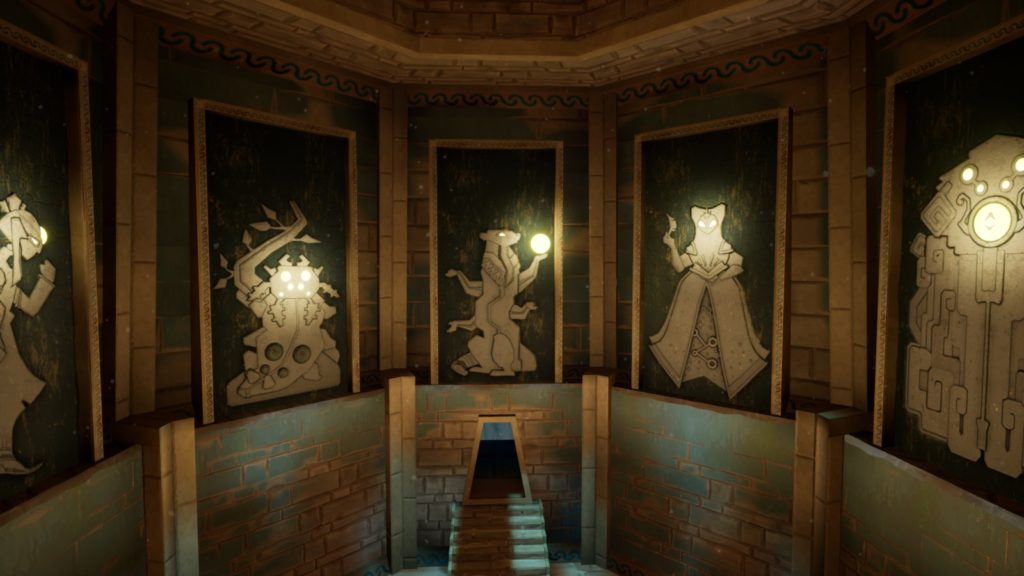 With each Cycle, everyone forgets each other and starts anew. This means that all of those fond memories, friendships, and interactions will be but a whisper of a memory, and we have to say goodbye to this version of our adventure for good. A small glimmer of hope remains, in that your character does mention they want to make it their goal to try to help your friends remember in this next world. Though this Cycle has happened so many times before, you can’t help but feel attached to this specific journey, because you got to experience it yourself and develop lasting relationships with these characters. If you’d like to pick up the game for yourself, you can find it at a steal of $14.99 USD on the Steam store.

Tags: adventure, indie, Mystery, Mythic Ocean, narrative adventure, pc, review, rpg elements
Summary
It has been three days since I said goodbye to the colorful cast of characters in Mythic Ocean and yet I still think of them fondly at random moments throughout my day. Mythic Ocean is one of those rare gems that gently works its way into your heart and mind, where the story is so creative and wonderfully told that you can’t help but think back fondly on the time you spent in its world. Mythic Ocean isn’t about putting limits on the player for the sake of progression. Instead, it encourages you to dive deep into its story and rewards you with a world full of life, color, music, and meaning that is sure to stay with you for years to come.
Good
Bad
10
Perfect

Have you ever desired a game with deep storytelling, colorful graphics, atmospheric music, and choices that matter? Mythic Ocean, from the three-person team over at Paralune, has all that and more. With this being Paralune’s first game, I a...
0
Average User Rating
0 votes
Have Your Say!
Your Rating: 0
Submit
Write A Review
Developed By:Paralune
Publisher:Paralune