Back in 2017, a company, newly founded, called Area 35 released a spiritual successor to the Advance Wars game developed by Intelligent Systems back in 2001. Developed as a turn-based tactics game, Tiny Metal evokes nostalgia reminiscent of tactics games of yore. The question is, however, does it stand up to the magnitude of the game that inspired it? This is our Tiny Metal: Full Metal Rumble review.

Full Metal Rumble is a turn-based tactics game at its core. Borrowing heavily from Advance Wars, it’s almost as if they took the original Advance Wars and remade it with modern graphics. Yet at the same time, it feels lacking, dull, and shallow in comparison. By no means does it stand up to Advance Wars in my opinion, but that doesn’t mean it’s not fun. 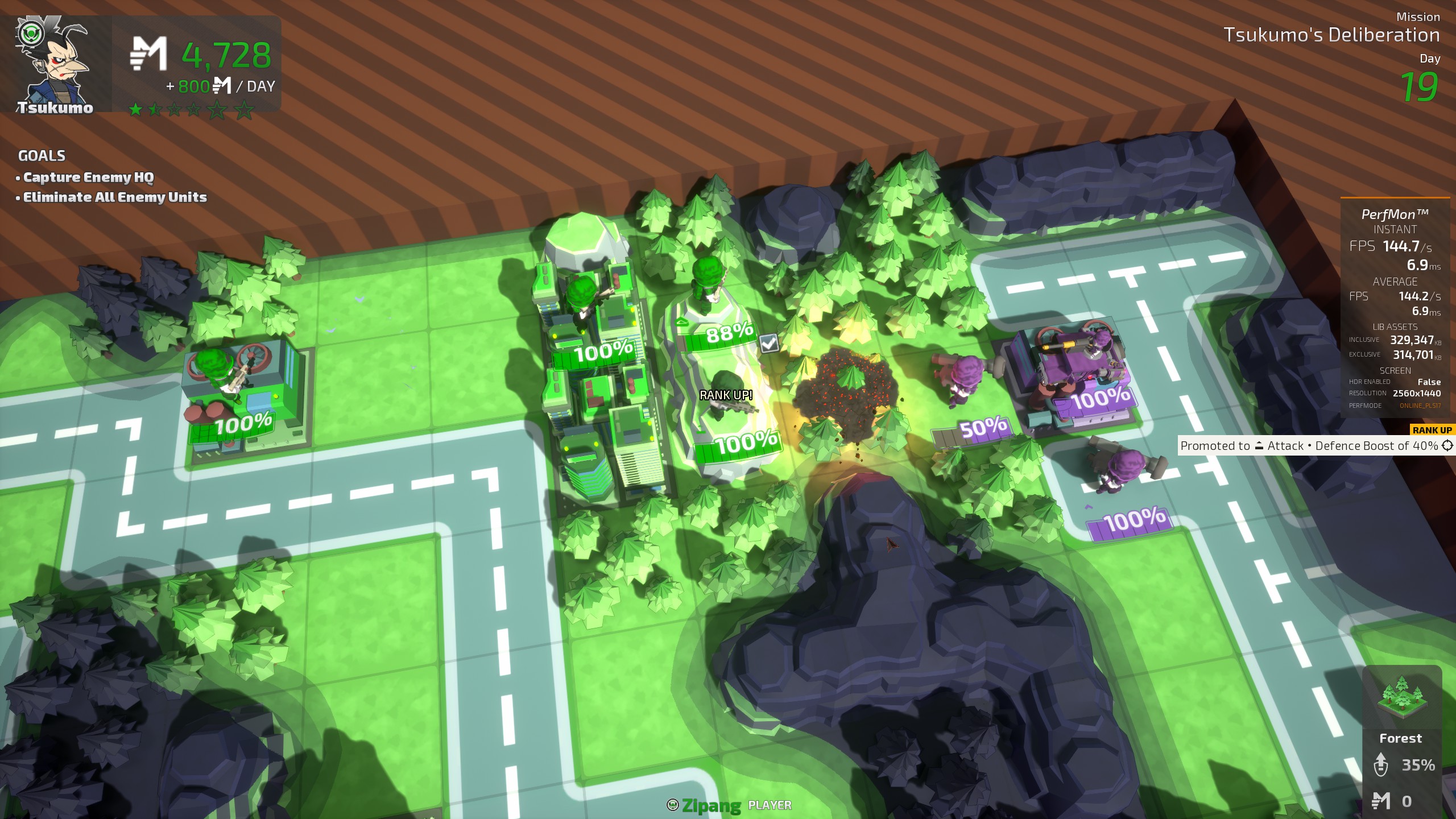 The graphics are nice, and pure design choices really make the game feel different, but the story is lacking severely. The plot is dull and appears to be more of an afterthought than anything. The story could be more engaging, and yet the voice acting, at least the English version, leaves much to be desired. While the Japanese voice-overs are better, that fact alone doesn’t make up for the only mediocre plot. This is a disappointing fact considering it was written by none other than Hirotaka Inaba, the writer for I Am Setsuna.

Where the game lacks in plot, it makes up with gameplay. I’ll be honest, when I play a tactics game, I rarely care about the story. Only Final Fantasy Tactics, and more importantly Fire Emblem, truly hold my attention when it comes to story in a tactics type game. If you have played any tactics game, it doesn’t matter which, you know exactly how Tiny Metal will play out. You move units each turn in an attempt to outmaneuver and flank your enemy, capturing buildings as you go. With Tiny Metal, these buildings add to your income each round, allowing you to build more units to fight with, If only it were that easy. 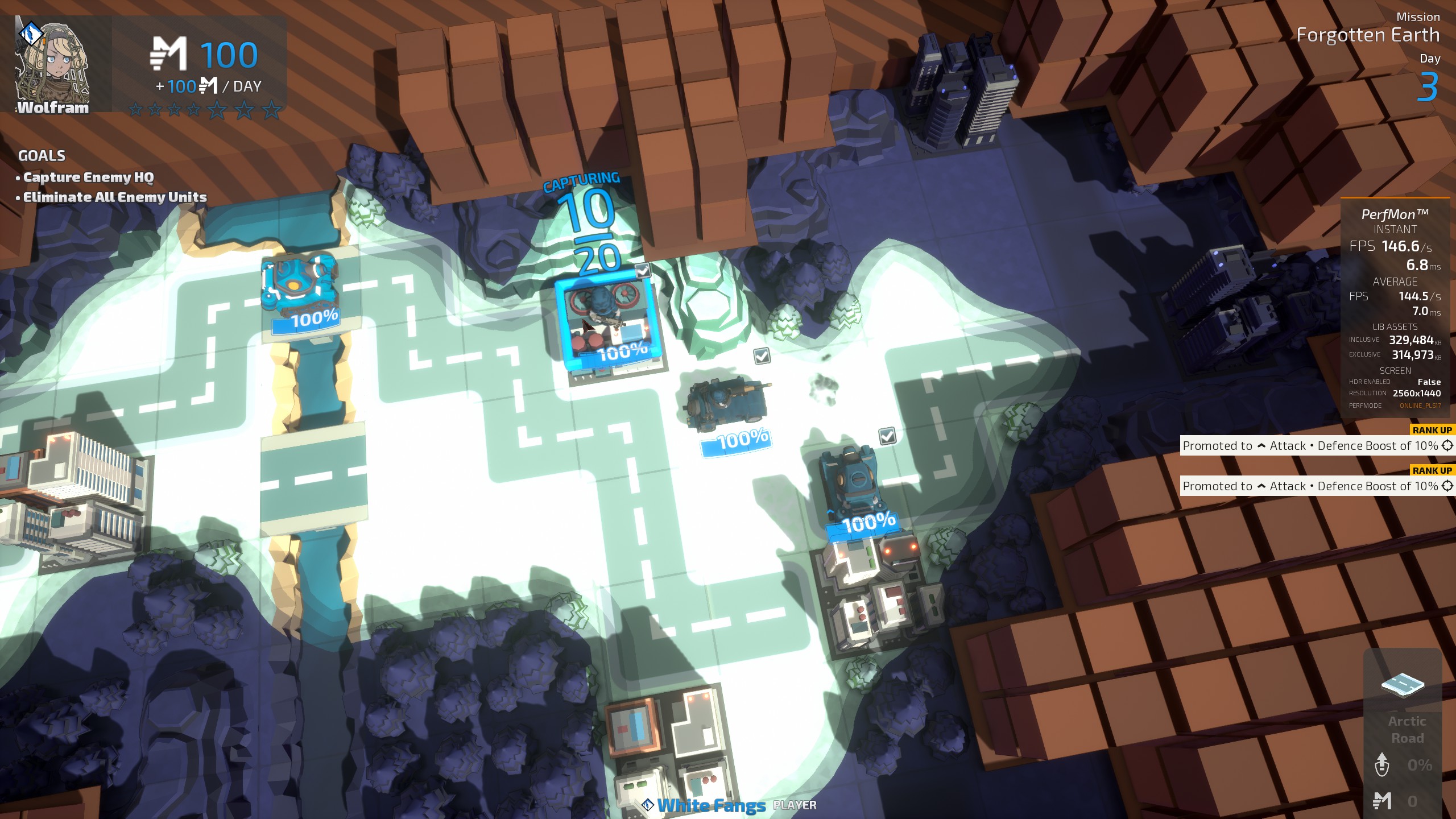 The game suffers one huge fatal flaw: controls. On the overworld map, if you click on a mission you are forced to begin that mission or alt-f4 your way out of the game to re-launch. Yes, there is a back button, which is set to Delete, but it doesn’t work. Thus, you are not able to back out of any menu you might need to that uses this key. What’s worse, the entire economic system I mentioned above involving the buildings is basically useless due to a simple system that shouldn’t be an issue. Every factory/barracks you own has its own turn each round. You can create a new unit, or pass without creating one, allowing you to save up money to purchase higher-cost units. Except it won’t let you pass. You can click on the option all day long, only to have it indefinitely cycle back saying you need to complete an action before you can pass.  This was so annoying to me that I basically gave up and just mass-produced infantry units, killing my income, not allowing me to build anything more than said Infantry unit. 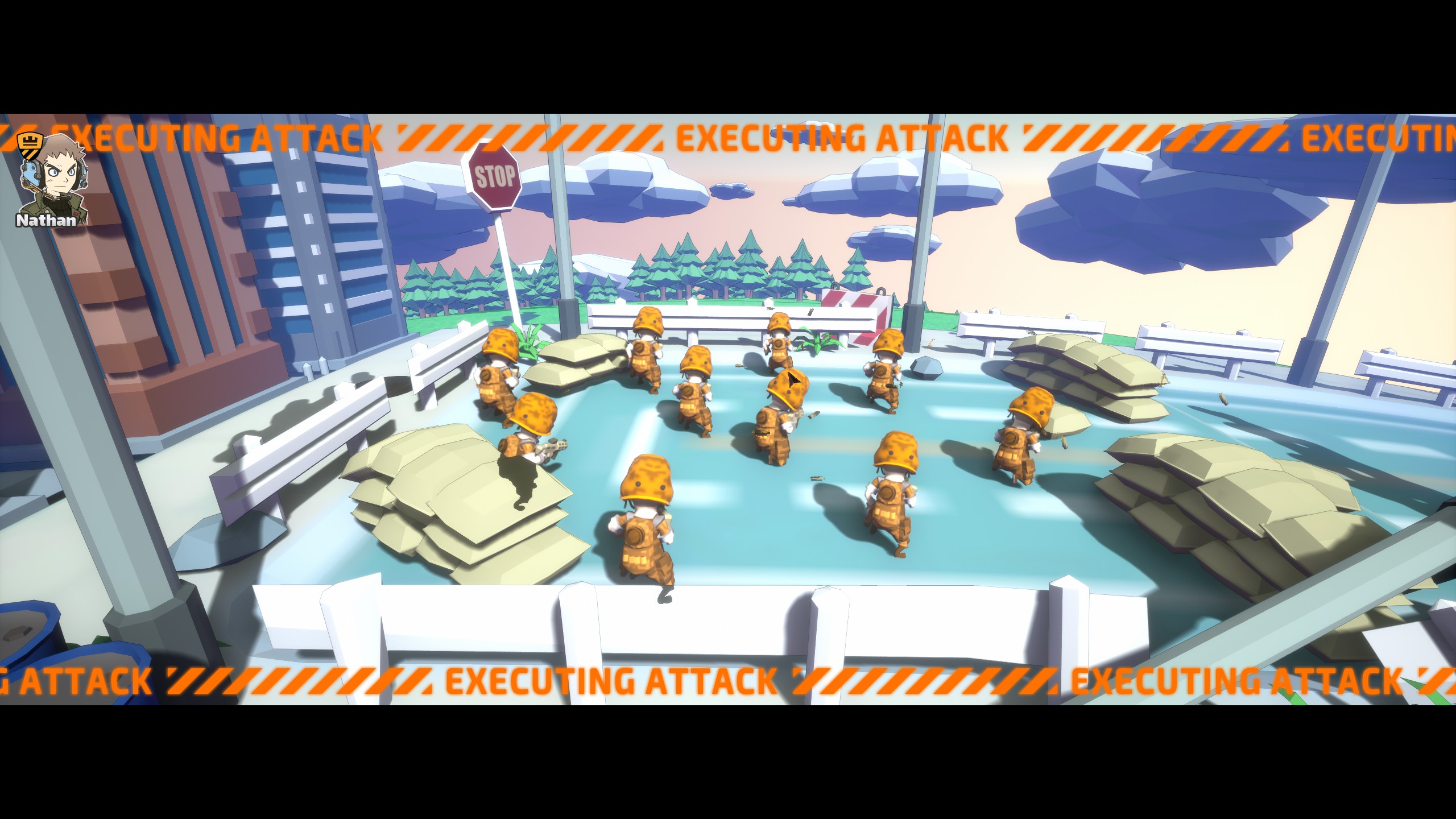 Issues notwithstanding, we come to another issue with the game, the developer. This is something I truly take issue with and it involves Kickstarter. Back in 2013, a campaign was started by a guy named Hiroaki Yura. Promising a JRPG with squad-based RTS design with an estimated release of sometime in 2015. Fast forward to 2019 and there’s still no Project Pheonix. Instead, Hiroaki Yura started a company named Area 35 back in 2016 and released a game called Tiny Metal in 2017. Did I mention they used the 1 Million dollars they made off the Kickstarter to make Tiny Metal? Basically, they did a bait and switch on thousands of backers, 15,802 to be exact. Promising a game, only to use the funds to create another, and while Project Pheonix still has nothing to show for, they’ve made a sequel to the game they did make: Tiny Metal: Full Metal rumble. 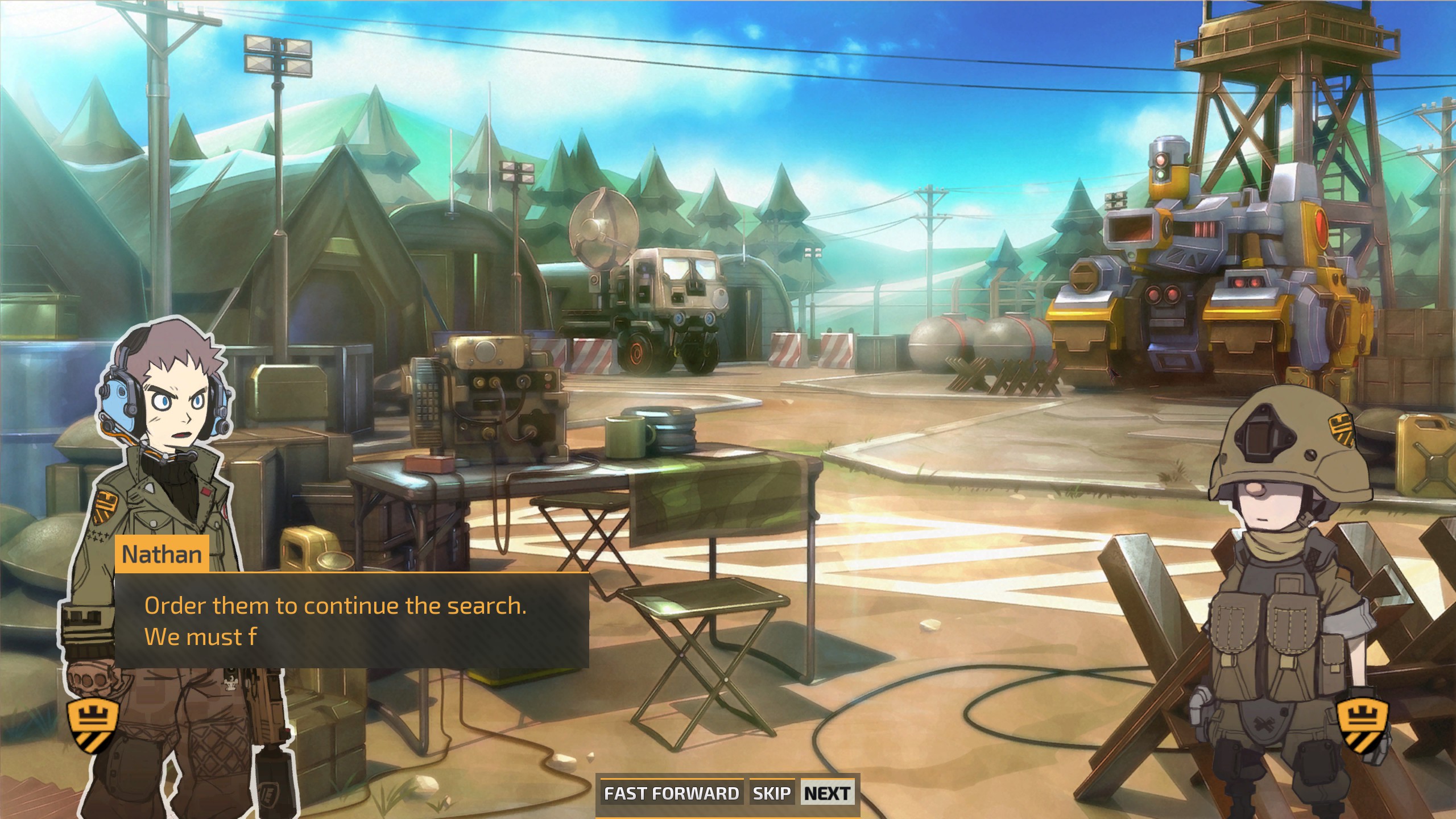 Do the issues outlined above impact gameplay that much, or even at all?  Who knows, it’s quite possible. Which could possibly be the reason why there are so many issues with controls and plot. Unfortunately, we will never know, and while Hiroaki Yura vehemently denies using those funds for Tiny Metal, we still have nothing to show for to prove otherwise. My issue with this is two-fold: Not only the ethical issues but also the financial implications. What happens when these 15,000 backers demand refunds? Where’s the money going to come from? This could ruin Tiny Metal, but truly, who knows at this point?

Regardless of issues I have personally with Hiroaki Yura, I can honestly say had it not been for the major flaws in the control system I’d very much enjoy the game. Yet if the game has no defining story drawing me in, and the controls make it almost impossible to play, what can I judge the game on? Hopefully, these issues can get resolved easily, and quickly, I can see this as a fan favorite all things considered, though as it stands right now it’s a hard pass for me.

Area 35’s PR team has reached out to me regarding the snafu of the Project Phoenix kickstarter campaign, and had this to say:  “While it’s true that Project Phoenix has unfortunately stalled while additional funding is being pursued, the accusations of Project Phoenix’s Kickstarter funds being used for the development of Tiny Metal have been rescinded by their original source and proven untrue.”

They are denying that any of this is true. As I’m not one to just take blanket statements as fact, I reached back out to them for details. If and when they reply, I’ll be sure to update you guys on my findings!

Tags: full metal rumble, tactics, Tiny Metal, Turn-Based, turn-based tactics
Summary
Tiny Metal: Full Metal Rumble is an Advance War inspired turn-based tactics game. Boasting nice graphics and soundtrack, but forgettable story and poor controls. While the game has it's moments in the sun, the issues with the controls truly kill the fun for me. With a lacking story, if controls are an issue, what fun is there to be had? Then there's the ethical issues behind the company itself, but I'll leave that to you to decide.
Good
Bad
4
Poor 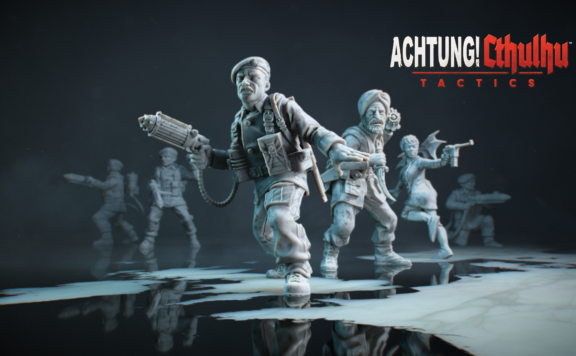 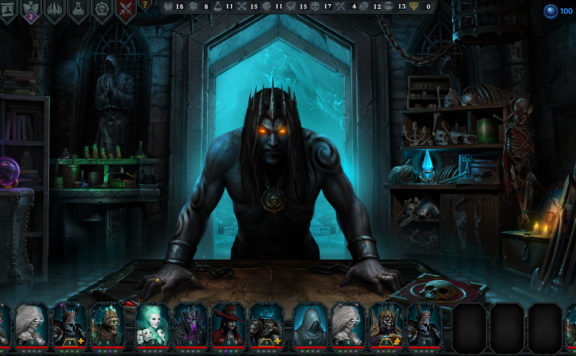 Back in 2017, a company, newly founded, called Area 35 released a spiritual successor to the Advance Wars game developed by Intelligent Systems back in 2001. Developed as a turn-based tactics game, Tiny Metal evokes nostalgia reminiscent of...
9
Average User Rating
3 votes
Have Your Say!
Your Rating: 0
Submit
Write A Review
Genre:Turn-Based Tactics
Developed By:Area 35