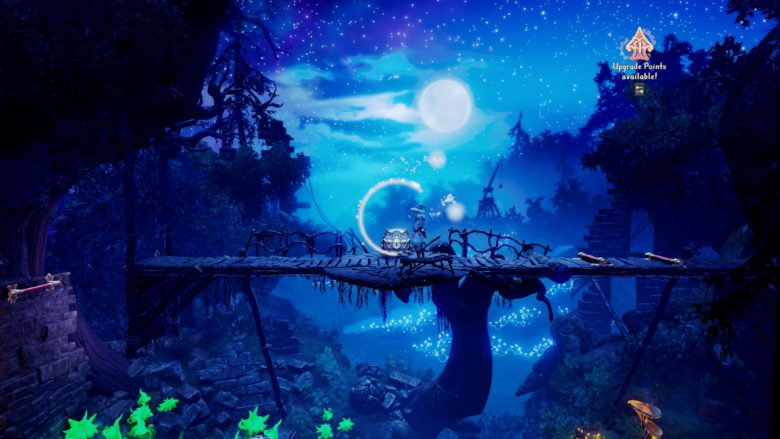 Frozenbyte’s latest attempt in making a new Trine game has led to an enjoyable but flawed experience that doesn’t differ much from the previous titles of the franchise but still worth playing. Trine 4: The Nightmare Prince seems like an entertaining 2.5D gameplay-driven puzzler-platformer on its own, but compared to the other Trine games, it doesn’t offer anything new. It’s more like a post-launch expansion with enhanced graphics than a brand new sequel. However, for those who are new to Trine, the newly published entry can be titled as one of the best puzzle-platformers of the year. This is our Trine 4: The Nightmare Prince review for PC.

Starting off the review by going over the story, Trine 4: The Nightmare Prince tells the tale of a prince who gets possessed in his dreams by demonic nightmares, making him to set fire on his own castle unwillingly and do a series of dangerous actions that worries people too much to call out for help from the three well-known heroes of the series. Amadeus, Pontius and Zoya team-up once again to beat the demonic nightmares and get the prince out of their realm. 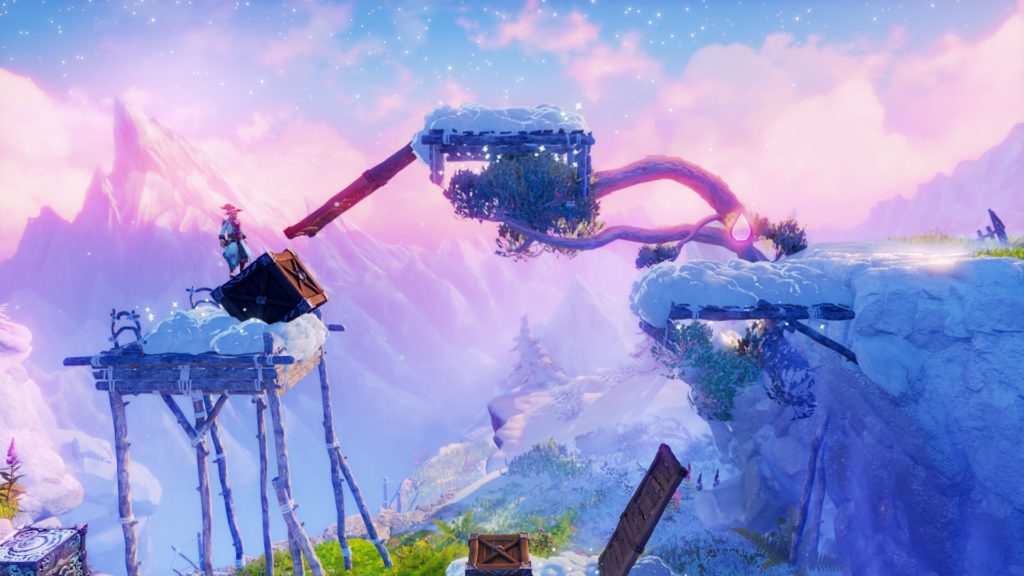 The story is as simple and straight-forward as it seems to be. Acting as a background for connecting missions to each other and generate some fairyland-style locations in the game. To be honest, I don’t expect a complicated story from Trine 4 with a bunch of ups and downs, but the long path that they’ve created to tell such a simple story and filled it with a bunch of unnecessary missions and acts, could be told in an interesting way with more exciting set-pieces and story-related dialogues. The rhythm of story-telling is well-planned in overall, though Act IV slows down the pace and becomes the most boring part of the game with a single boss-fight level and three side-story-style missions.

As I mentioned before, Trine 4 is a gameplay-driven title and you shouldn’t expect anything further than this about the story. But when it comes to gameplay, it has much more to show-off with the mind-bending puzzles and smooth platforming mechanics. Being able to play as three different characters in the game has provided a great opportunity for Frozenbyte to design various fun-to-solve puzzles and make you spend a lot of hours playing the game without getting tired of it. 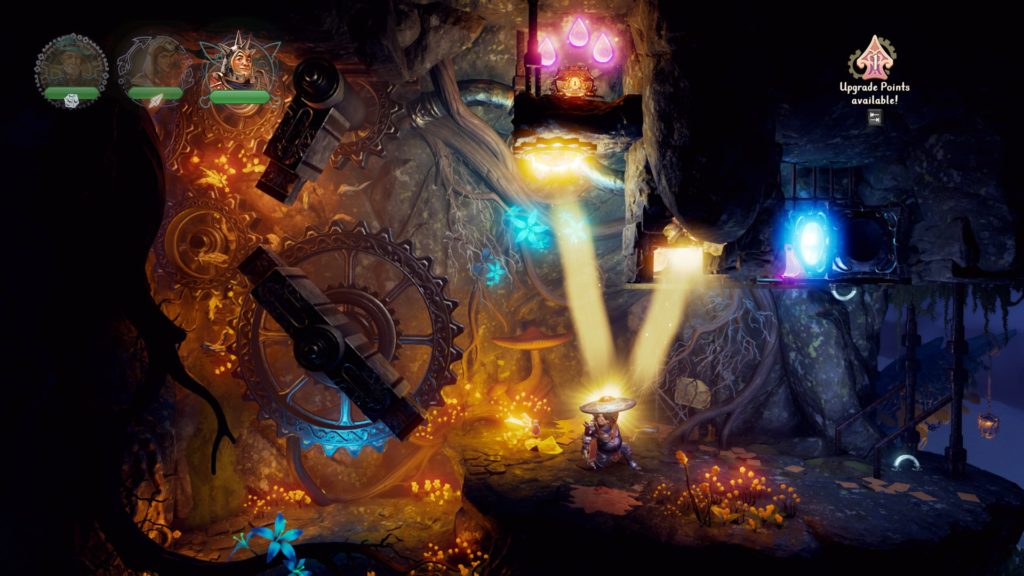 Each character owns a bunch of different skills that unlock as you progress in the game, kill more enemies and gather purple light-bulbs. With the new abilities becoming available for heroes, the puzzles get higher in difficulty level and that’s a balanced experience I was looking for. Both the quality and quantity of puzzles in Trine 4: The Nightmare Prince meet the highest possible expectations of the community. The game includes two types of puzzles of which the first group needs to be worked out in order to reach the end of levels, but the second ones are hard-to-solve puzzles. You can skip them if you have no intention to collect valuable items but the entertaining part isn’t getting those items but to find out how the new puzzle works. it’s admirable that Frozenbyte has designed a huge amount of distinct puzzles in Trine 4 that rise in difficulty as the game adds new mechanics and new obstacles as well. Playing the game in infinite mode or local co-op is another way to have fun for a few days more.

Puzzle-solving in Trine 4 is the loveliest part of the game but that’s not the only part available. Throughout your journey with the heroes, you’re going to wipe out different enemies and bosses which is not a big deal at all, and that’s exactly the problem. Trine 4 is a challenging game in puzzles, but when it comes to combats, it might be the easiest game of the year even at its highest difficulty level. Lack of challenge in fighting against enemies makes a considerable part of the gameplay to feel dull and unsatisfying. It’s really tough to see the Gameover screen more than once in Trine 4 and that’s not what we expect from a title that features combats in all of its missions. Moreover, the variety of enemies is not acceptable at all, with most of them just biting you or aiming you with arrows. 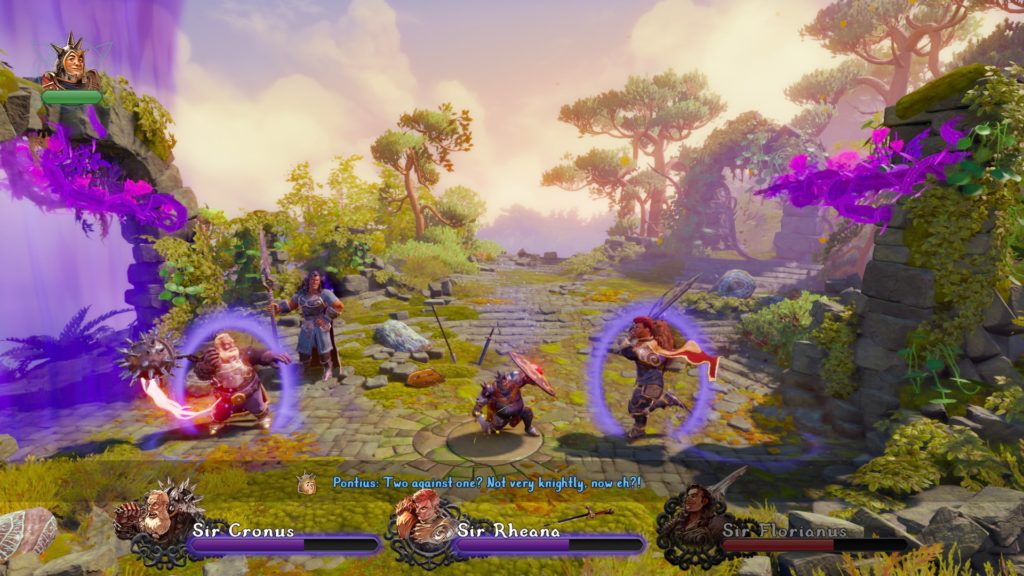 In the case of world design and crafting distinct locations, Trine 4 performs the same as it does for the puzzles. Within all five Acts of the game it’s difficult to find similar places that feature the same obstacles on your way. Thanks to Frozenbyte’s great vision in drawing beautiful landscapes and mesmerizing environment, each level in Trine 4 delivers a different atmosphere to you with a bunch of fascinating places that makes you stop playing and just watch it for a few seconds. In addition to this, the game is precisely polished with almost zero percent of technical issues.

Trine 4: The Nightmare Prince is a fun experience that makes you think, work out the puzzles and enjoy what are you doing within the game. If you’ve liked the previous Trine games, there’s no reason for you to dislike the new installment. On the other hand, if you are new to the series, prepare yourself for engaging gameplay that won’t leave you alone anytime soon. However, with all the good deliveries of Trine 4, it still lacks in defining new mechanics, characters and ways of play to cause a meaningful difference between the new title and previous ones. Moreover, it features way too easy combats that make the game to feel boring every now and then. Fortunately, the good parts in Trine 4 are strong enough to disturb you from its issues and that’s why it worth playing. 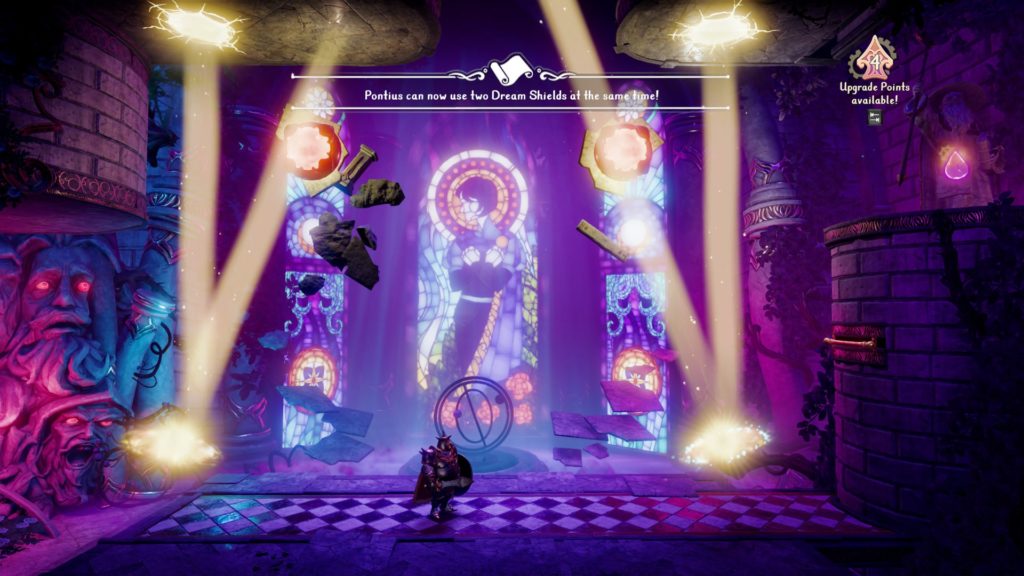 Note: A PC key was provided for the purpose of review.

Tags: Frozenbyte, pc, review, The Nightmare Prince, Trine 4
Summary
Trine 4 could’ve been one of the best puzzler-platformer titles of the year if Frozenbyte had spent more time on designing combats and injecting new mechanics and characters to the veins of the series. The new Trine approximately feels the same as previous games, so it’s a fun-to-play game, but doesn’t offer anything new.
Good
Bad
7
Good
Previous ArticleRunescape Mobile Is Coming This YearNext ArticlePlayStation 5 is Coming Late 2020