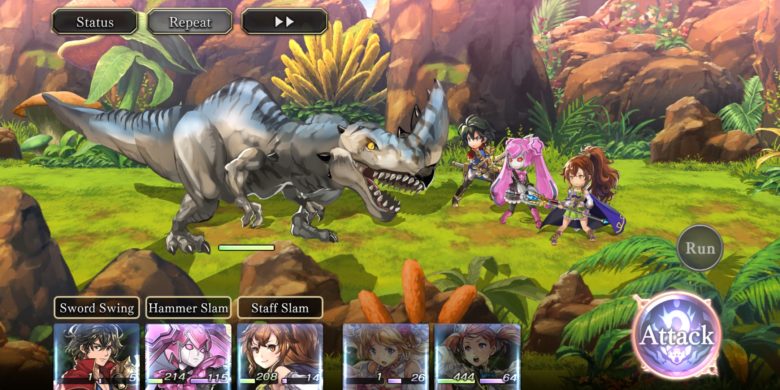 Last Month, Another Eden, one of the biggest mobile games you’ve probably never heard of launched onto a worldwide stage. Another Eden: A Cat Beyond Time and Space is a game that sets out to leap back to an era before cash grab mobile games. Join our party as we find out if it succeeds or just ends up feeling old. 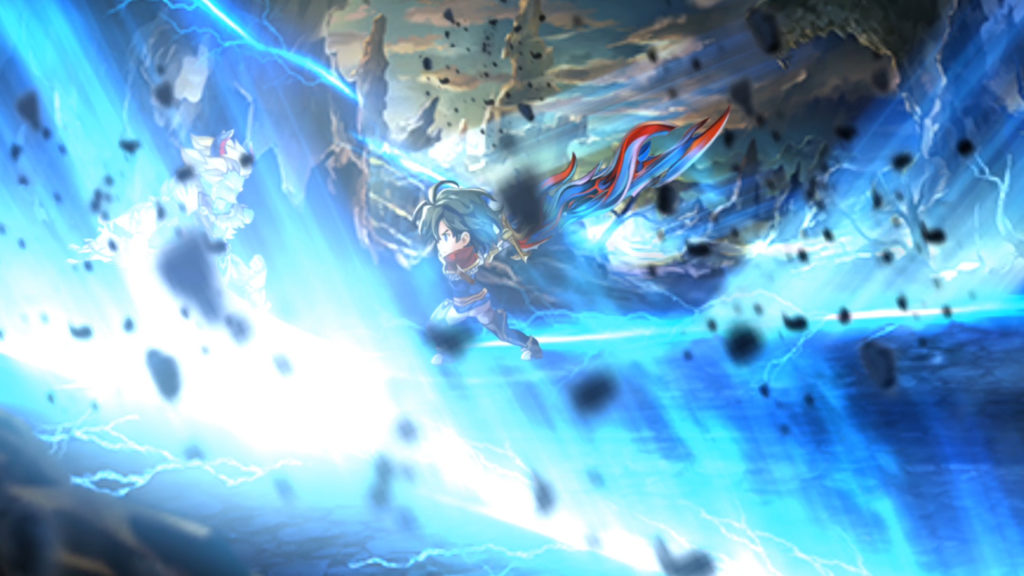 After racking up nearly 8 million downloads its home territory of Japan and looting Google Play’s award for “Best of 2017”, publisher WFS finally took this mobile RPG touring. In January 2019 it hopped over to a select line-up of territories and by June, Europe and South-east Asia joined the rest of the world on a quest save the future. With an acclaimed writer, Masato Kato, behind this project and the promise of a deep solo narrative, this seemed like the sort of adventure that I could invest some serious time into.

Like many journeys, Another Eden begins with the tragedy of an unassuming young hero. Adopted by a local village and with modest aspirations. The main protagonist, Aldo, begins the game as a simple guard. Through a twist of fate and due to the seeming intervention of a time-traveling cat, players are quickly swept up into an adventure through time and space in an effort to save Aldo’s sibling and ultimately, the future of humanity.

From the first opening chapter, it is clear that Another Eden is something different. This particular solo adventure begins a narrative experience that is focused on the single-player experience. While other games quickly push players into online PvP encounters or introduce an energy-based dungeon rush, the first focus of Another Eden is character development. The fairly passive consumption of the opening act makes an adequate effort to fill out Aldo and his family’s back story while slowly drip feeding the basic mechanics that will make up the foundation of the gameplay.

In that first opening act of Masato Kato’s RPG, it is immediately evident that a huge amount of care and attention has gone into crafting an RPG that mobile gamers can lose themselves in. Another Eden is a game that looks utterly gorgeous. Even if the chibi character design is not to your taste the background animation and overall setting of the game is detailed and incredibly diverse. As you progress through the game, swiping left or right to cross the 2D world, each central city acts as a great example of the effort Wright Flyer Studios takes to build a world that is worth investing in. While NPCs might not have the largest array of lines, almost every character milling around the street has something to say. The plethora of shops, households, and other establishments are ripe for exploration. Each homestead fills in a little more of the story behind each stage and means to make you invested in the fate of its inhabitants. Whether during those first moments in Aldo’s village or stumbling across prehistoric landscapes, the detail in everything from character weapon sets to each of the NPC houses makes for a world that feels lived in and real.

Just as the artistry makes for an enjoyable escape into Another Eden, the accompanying soundtrack is exceptional. While the game reels you in with a largely passive opening chapter the soundtrack asserts itself on your senses. Despite the mobile lineage of this title, the soundtrack is not cut back by any means. Yasunori Mitsuda crafts a diverse range of scene-stealing accompaniments that feel surprisingly full and refined for each of the various stages of your upcoming journey. Each environment that lies ahead has its own backdrop and central characters even seem to have their own themes. While the battle in another budget title might fall back to the same metronome, Yasunori Mitsuda manages to keep the experience fresh for players. Please do yourself a favor and turn up the volume when you dive off through time. 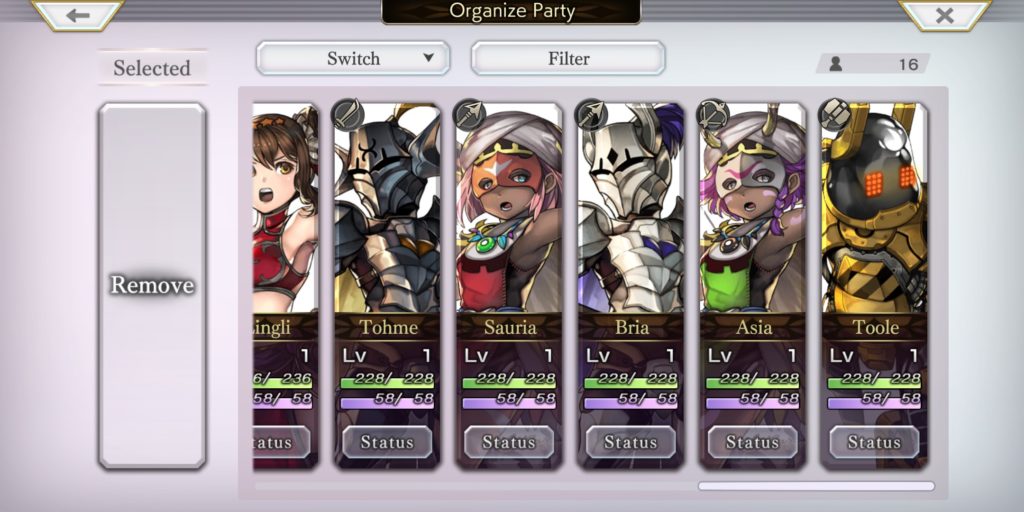 As Aldo leaps through time, every time hoping his next leap will be the leap home, The Cat Beyond Time and Space opens up into a series of episodic narratives. Taking somewhere around 30 minutes each, these stages are filled with adventure, side quests, and a single story arc that spans the entire game. Splitting the game up into these distinctive slots allows WFS time to adequately develop the story behind the game’s expanding roster. New characters join Aldo on his quest as the game unfolds, and while writing can be a little cliché, it is no more so than any other JRPG. What Another Eden manages to achieve is a set of characters, each part of an expansive and fulfilling story. The game even manages to add end game content in the form of dungeons and side quests as players approach the end of their adventure.

Combat in Another Eden is largely a straight forward experience No matter what era you end up in, combat follows a traditional JPRG turn-based system. From massive dinosaurs to ferocious dragons, and synthetic humans, Aldo’s party is intermittently accosted by a handful of thematic mobs and the occasional boss tier challenge. With a party of four characters and two in reserve, players can arrange a seemingly uncomplicated mix of magic and physical skills as they take on anything that gets in their way.

Despite some initially understated combat controls, the variety of classes, a wide range of abilities, a deck building system, mana pools, and HP management give a good amount of diversity to consider. The game definitely does not play itself and requires players to make decisive tactical choices when the going gets tough. After unlocking eight different classes, a range of elemental attunements, and an arsenal of different weapons I lost track of the potential combinations. By managing this party loadout, swapping out the attack order and selecting the appropriate character skills Aldo and his associates can overcome some of the game’s more difficult hurdles. 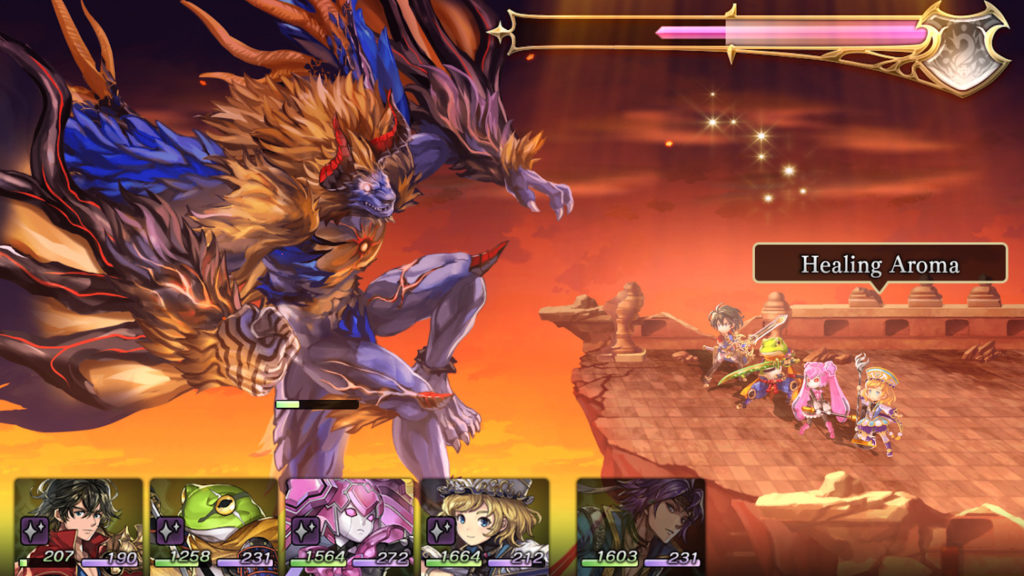 While this doesn’t give the same level of tactical challenge as something like Brown Dust, it does feel satisfying and more like a fully formed JPRG than a glorified gacha game. While the party system does encourage some obvious deck building, the character progression and fine-grained strategic control in Another Eden takes inspiration from the JRPGs of old rather than the mass material market consumption of modern deck building systems.

Unlike many other modern mobile RPGs, Another Eden is barely monetized. The game’s currency system primarily revolves two prevalent currencies. In the game, gold is used to drive player progression and gear upgrades while Chronos Stones act as the most obvious premium currency. Premium currencies are directly analogous to purchasing player resurrections mid game and unlocking additional party members. Called encounters, these blind card draws are a very mild sort of gacha gaming. Encounters allow players to trade real money for the chance to fill out their party with a variety of unique characters but, unlike other mobile cash cows, this step is utterly unnecessary. You will pick up new party members as you play and the game is ultimately balanced to only give a minimal push to put pull out the plastic.

No matter how convoluted time travel gets, there’s only one question I’m left pondering as I turn off Another Eden. Why Mobile? This game is ultimately a huge time sink. It won’t vacuum up your wallet but do be prepared to put in significant hours, especially if you want to dive into each character’s back story.

Despite this, the investment does pay off and there’s a lot to like about WFS’s RPG. If you loved games like Chrono Trigger, Secret of Mana, or even early Final Fantasy then you’ll recognize at least some of that DNA in this. The passion behind this creation is evident and even when it jumps into the odd cliché, the nostalgia factor just drags it right on through. Simply put, Another Eden is a marvelous mobile RPG and unlike the more disposable nature of more modern mobile games then Another Eden is definitely worth your time.

Another Eden: A Cat Beyond Space and Time is out now. You can find out more before you leap over on the official website or grab the game for free on the iOS App Store and Android Play Store.

Written by
Ed Orr
For those of you who I’ve not met yet, my name is Ed. After an early indoctrination into PC gaming, years adrift on the unwashed internet, running a successful guild, and testing video games, I turned my hand to writing about them. Now, you will find me squawking across a multitude of sites and even getting to play games now and then
Previous ArticleTorchlight Is Free at Epic Games Store For A Limited TimeNext ArticleOverwatch – Developer Update July 2019: Summer Games & New Hero #31 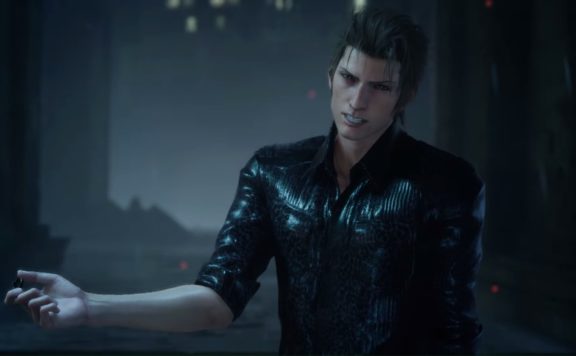 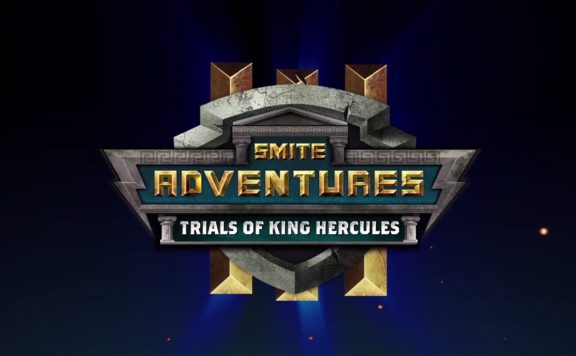