Indie games seem to mostly follow one of two patterns: they either reiterate on an established formula (every Meat Boy platformer out there), or they moosh up a couple of completely different game types into one. This game falls into the latter — a title that felt compelled to throw a roguelike dungeon crawler, town management title and shopkeeping game into each other to see what would happen. It’s a mad recipe that I’m glad someone tried. This is our Moonlighter review. 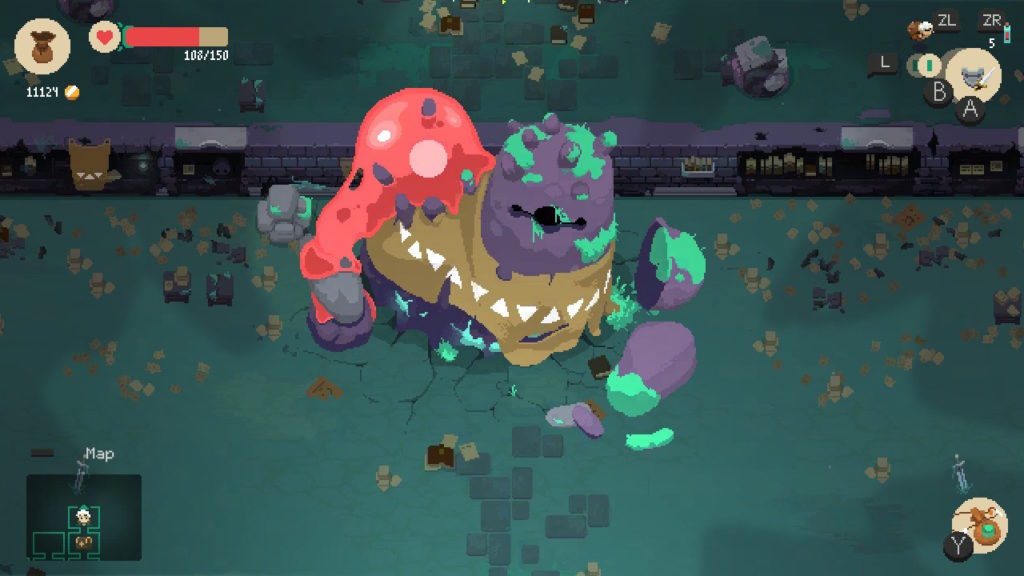 The copy I reviewed was for the Nintendo Switch version which is due on November 5th, but the game is currently out on the PS4, Xbox One and PC via a variety of distribution platforms so it’s entirely up to you which way you want to play. I’m pretty certain the Switch version carries no distinct advantages, however. Honestly, any platform for this one will do.

You play the part of a young man running the titular shop of Moonlighter. Your day runs in a pretty similar circle: you go into the mysterious dungeons near your town, collect goodies from monsters, then bring them back to sell in your shop or use to craft various items.

Even with that all said, however, I am oversimplifying things immensely, as the treadmills to this game run long. Yes, things are pretty grindy in the life of Moonlighter, but it’s the same sort of enjoyable grind or routine that one would get out of games like Stardew Valley or Animal Crossing or any other title where you’ve little goals to achieve. Much like Stardew Valley, there are a number of little activity hooks that kept me hopping in for more. 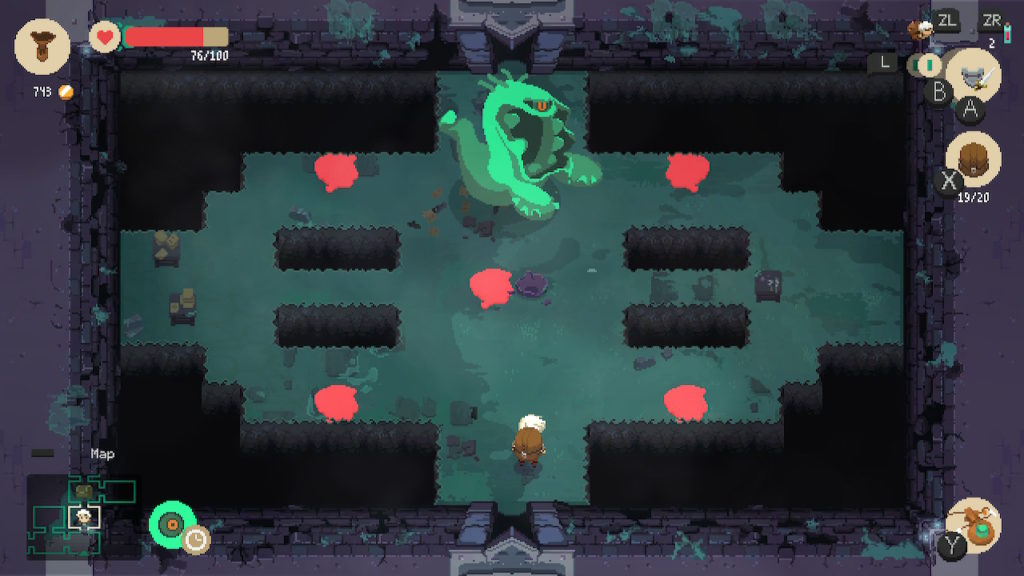 The fuel for all of these activities lies in the dungeons, which are top-down Zelda style affairs of randomly generated floors. I really wish this game didn’t lean on a trope that seems irrevocably tied to roguelike dungeon crawlers, mostly because the dungeons are just square rooms without too much variance or interest. I appreciate the reason why this was the design choice, though,, as you’ve got to stay on your toes — like any good roguelike, death means you lose pretty much all of your collected spoils.

Those collected spoils are the whole point of what happens in the town. Most of your time is spent placing those items on the shelves of your shop and selling them to townspeople. This is another addicting little activity in itself, as finding the price that yields the best profit from a spectrum of customer reactions ended up being an addicting little minigame.

Managing pricing and keeping an eye on supply and demand are all a part of the shopkeeping experience, but mercifully the game does a great job of helping you keep track of it all with a journal that notes everything you’d need to ensure you’re profitable. There’s a sort of strategy to it all, which makes what would otherwise be a droll task feel more mentally engaging. 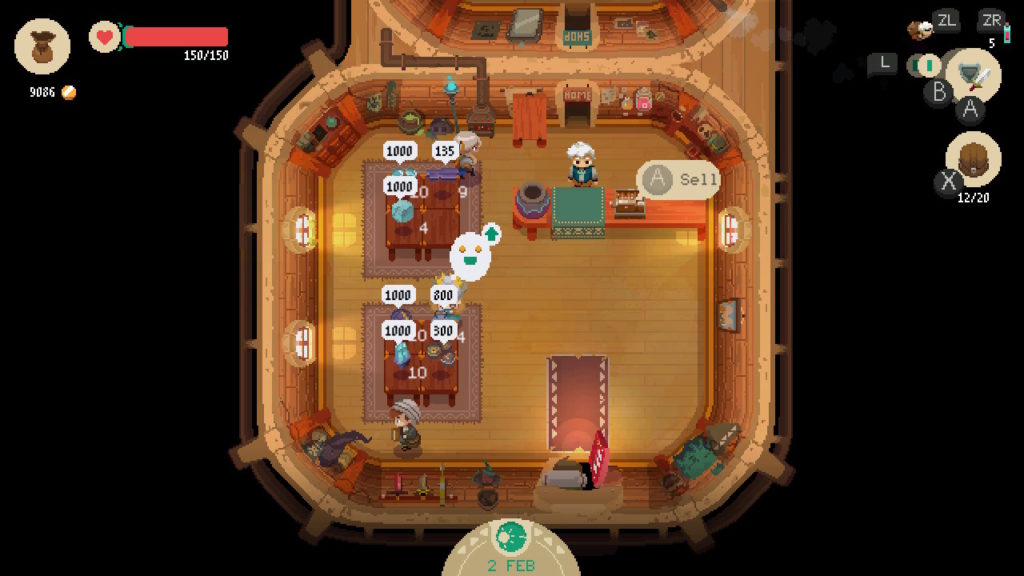 Those profits you rake in can be applied a couple of different ways. Your money can be invested into the town itself as you provide venture capital to other shops to set up. This directly benefits you, as these shops provide services like items, weapons, armor and enchantments for your equipment. Which leads into going deeper into the dungeons. Which leads to more new stuff to sell. Which leads to more money and you get the idea by this point.

For all of these attractive carrots to chase, there are a couple of minor sore spots for me. The game’s combat system feels a bit stiff, with your attacks freezing you in an animation lock as you swing your weapon. There are a lot of frames of animation in everything you do, which makes for a visually impressive piece of retro-style gaming but also means you have to stand there for a few seconds with your sword held in one place as two or three frames of animation are spent making sure your hair flaps appropriately. Once I got the cadence of weapon swings down, it became less of an issue, but it still bears mentioning.

A far more annoying design decision lies in how certain items you find in treasure chests have weird modifiers. Some items have strange requirements to pick them up and put into your inventory, like the fact that they have to be located on a specific side of the inventory box, or items in an indicated direction adjacent to it would be immediately destroyed. I’m not entirely sure what the mindset here was, but taking a moment to shift my bag’s contents to carry as much as possible brought me back to those old Diablo days of playing inventory Tetris. Which is not fun.

Also, I’d have liked some of my character progression to speed up just a tiny bit more. The upward tiers of gear definitely feel a bit out of reach and the grind may wear after a time. Perhaps. I’m a person who doesn’t hate grind if the activities are fun and these are damn fun activities. 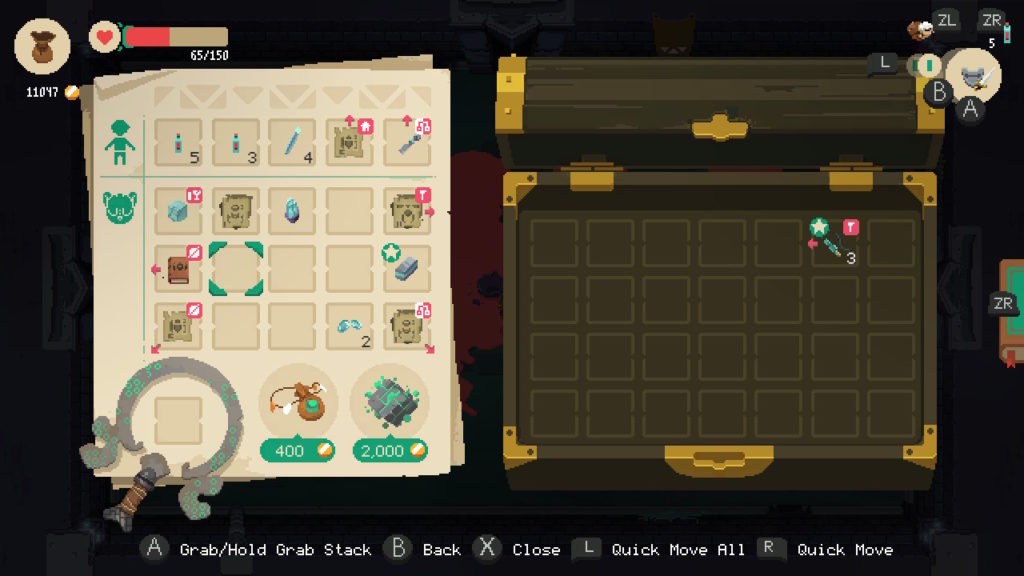 I’m not completely calling these issues dealbreakers, particularly since the good stuff carries much more worth than the bad. Moonlighter is one of those titles that just sort of ended up making me okay with its contrivances and keep playing for a pretty long while. In fact, just thinking about it as I write this is making me want to fire it up again, so it absolutely is under my skin. 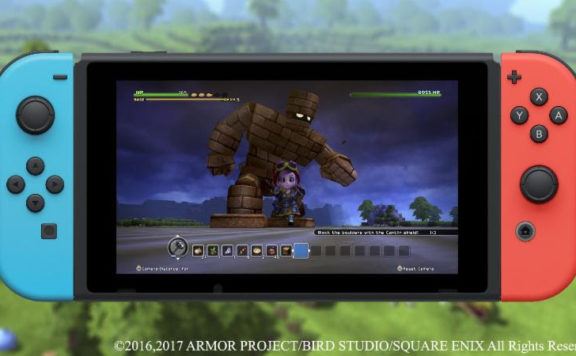 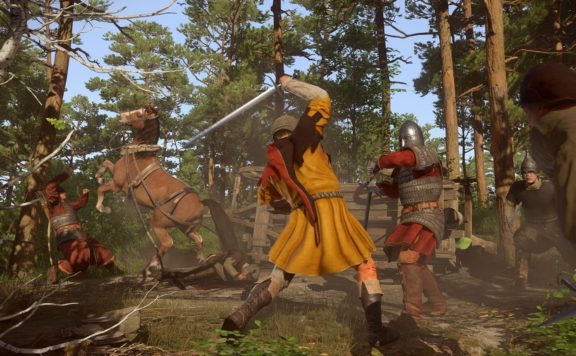 Indie games seem to mostly follow one of two patterns: they either reiterate on an established formula (every Meat Boy platformer out there), or they moosh up a couple of completely different game types into one. This game falls into the la...
0
Average User Rating
0 votes
Have Your Say!
Your Rating: 0
Submit
Write A Review