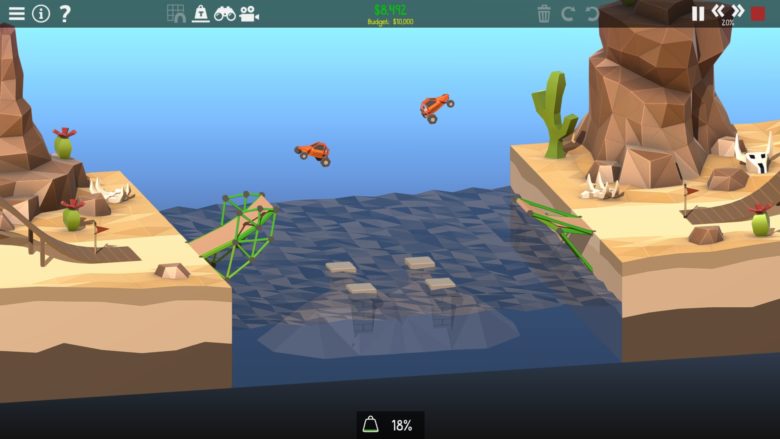 Dry Cactus, the developer of Poly Bridge, is back with another bridge building game, aptly called Poly Bridge 2. Just like the very popular original, you are once again tasked with getting vehicles from point A to point B on the aesthetically suited low poly count levels by building bridges, ramps, swings, or whatever contraption you can think of to traverse the gap. Is there a spot for Poly Bridge 2 in the already crowded physics puzzle genre, or have we gone a bridge too far? We answer that question in our Poly Bridge 2 review.

If You Build It, They Will Play

Right from the get-go Poly Bridge 2 feels more like a DLC map pack than a full-fledged sequel. There is an updated physics engine running in the background but it’s more evolutionary than revolutionary. Likewise, building bridges is done just like it is in Poly Bridge or any other bridge-building game for that matter. Each scenario has at least one vehicle positioned at a starting point on the left side of a gap and corresponding flags that must be reached on the right side. The space in between can be empty, but more often than not there are obstacles to work around. From there you must find a way to get each vehicle to its destination with whatever construction materials are provided for the level.

In an attempt to set itself apart from the crowd Poly Bridge 2 adds a few things to differentiate its puzzle recipe, with the addition of springs to the materials list being the most obvious. In an otherwise rigid world springs open up a whole new way for your bridges to bend without breaking, allowing some very unique solutions to multi-level building.

The other area where flexibility comes into play is how Poly Bridge 2 measures success. Like other games in the genre, coming in under budget with your bridge intact is the optimal outcome but that’s where similarities end. Going over budget or having a piece of your bridge break doesn’t restart the level. In fact, the only requirement is each vehicle makes it to its finishing point; having a section break may be part of your plan. 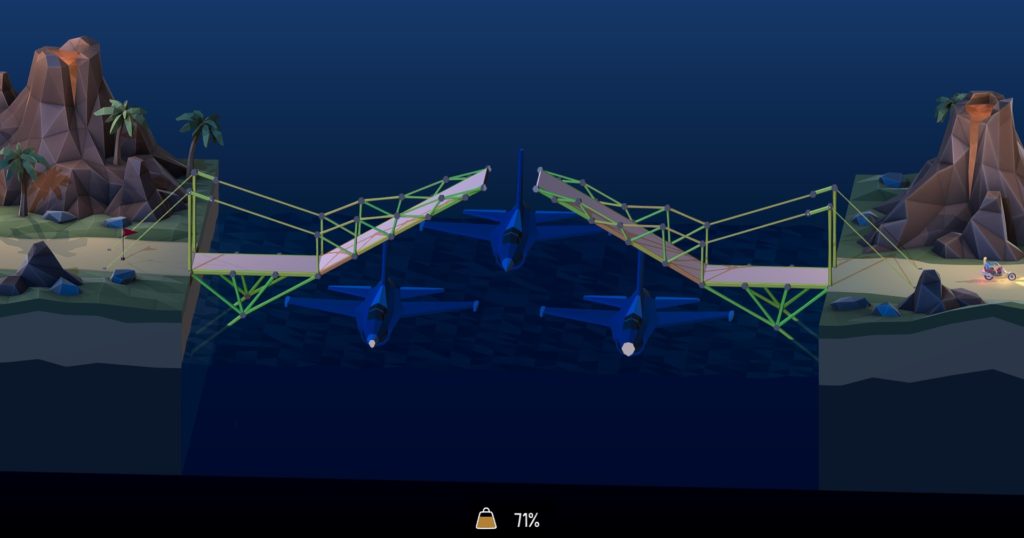 This principle of imperfect construction actually starts at the level select screen. While other games make you collect stars or have flawless solutions to unlock new levels PB2 doesn’t have any such restrictions. Each of the 64 levels can be played sequentially if you wish but if you are having trouble on a particular level you can switch to a different one, eliminating the stress buildup that can often lead to a rage quit.

Whatever I build you can build better

My favorite part of Poly Bridge 2 is the Gallery. After completing a level you are presented with other player’s attempts. The genius on display in the Gallery is truly mind-boggling. The solutions found within are usually more elegant and done at a lower cost than anything I have come up with. Some players hide their secrets by obscuring their bridge to only show the level was completed at minimal cost, but others are happy to show how they were able to bridge the gap with Poly Bridge 2’s equivalent of MacGyver’s duct tape, a bobby pin, and a tic-tac. Beyond helping me realize why I am not an engineer in real life, the Gallery has another important purpose. The tutorial in PB2 doesn’t do much more than tell you to keep trying until you get it right so when my uncreative brain struggles to come in under budget I can always head to the gallery for an insight into new ways to use the limited materials at hand. 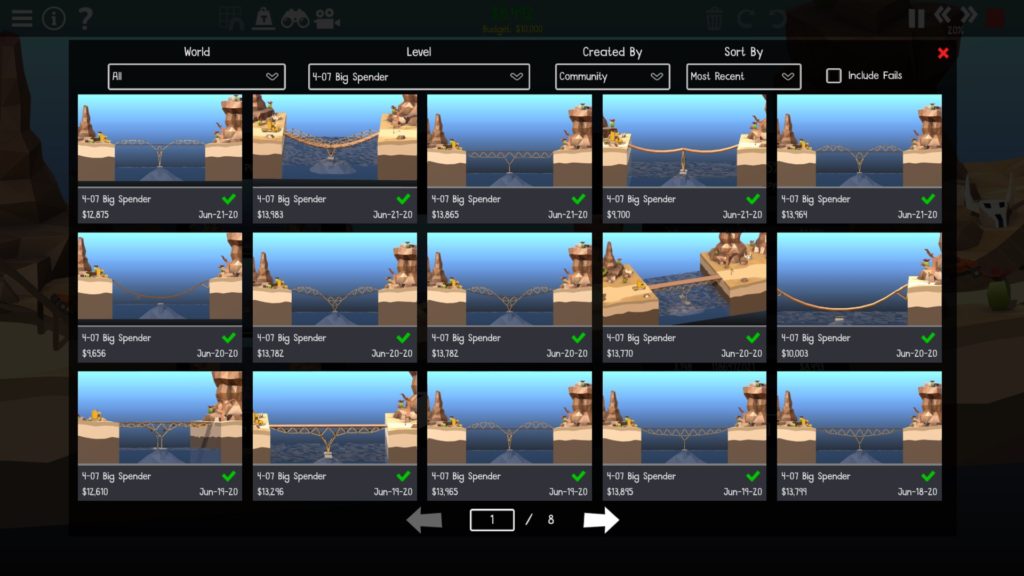 Check out other player solutions in the Gallery

When you finish the 64 levels included with Poly Bridge 2 you can try your hand at creating your own levels in Sandbox mode. This editor gives you full control of the map, from sizing the left and right platforms to adding additional anchor points and all the obstacles found in the base game. Then all that’s left is to set the materials list and budget for the map before giving it a try. Once you have it just the way you want it you can upload the map for others to play. This type of game always attracts the creative types so it’s no surprise there are already thousands of levels uploaded to the Workshop for you to play as well.

So, back to the original question – is there a spot in the genre for Poly Bridge 2? Yes, and no. Let’s start with the no. If you’ve played other bridge building games and found them lacking then turn away now. If you’re looking for a simulation that explores all the physics behind building bridges then, again, turn away. But if you’re looking for a puzzle game that relies heavily on a consistent set of physical rules then PB2 is for you. Even if you’ve played and completed every level of Poly Bridge you’ll find enough substance here to warrant picking up PB2; the addition of springs is enough to add new challenges to the mix. And if you’re new to the genre I can’t stress enough how enjoyable PB2 is due to its freedom to play the way you want. Just be prepared to spend some time figuring things out on your own due to the lack of a good tutorial.

Note: Our review was played on Steam through a code provided by PR.

Tags: bridge builder, Dry Cactus Games, Poly Bridge 2
Summary
There are only so many ways to build a bridge but Poly Bridge 2 finds a way to add enough to give new life to the aging original. The lack of a tutorial can make the first few levels more challenging than necessary, but the mix of traditional bridge-building and unconventional solutions will keep you engaged level after level. When the 64 levels included in the game are done the community fueled Gallery and Workshop levels will keep you going for hours on end.
Good
Bad
8
Great
Previous ArticleDC Universe Online Reveals WonderverseNext ArticleSMITE to Feature Avatar Character Skins Next Month