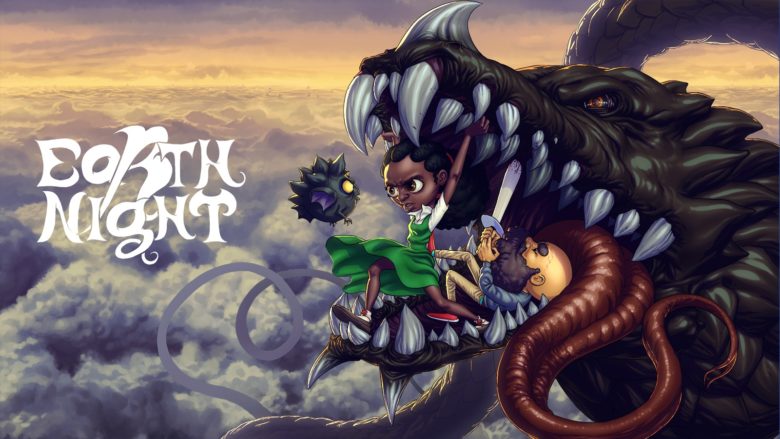 Love platformers? Love games with great replayability? Well, EarthNight is on the eve of release and it’s an intoxicating new platformer. This is a beautiful hand-drawn platformer with great charm and characters. I personally preferred the bearded swordmaster, but both characters have their play styles. The dragon narrative is told very subtly, with the world being taken over by dragons. Therefore, you gotta drop on them and dispatch them before they destroy the world. There is a tiny bit of backstory to each character as you progress, but I’m not quite sure WHY so few people survived the invasion. Overall the game is a visual and audio spectacle with tight controls and great progression. This is our PC EarthNight review.

This is a title best played with a controller. It feels very native and would likely transfer very well to mobile play as well. The controls are tight and responsive allowing for some major air time as you traverse on the dragons. Once you start getting some power-ups and character modifying progression, you can start stringing together some beautiful air defying tricks to progress through the “dragons” or levels. There are tons of objectives and sometimes just getting a lot of air hang time, isn’t the best option, so make sure to make use of the “dive” commands to manage your height.

Many runners lack mid-game progression, where after a few runs if you don’t make it any significantly further, you can’t really progress power-ups, but EarthNight solves this with their “water” or currency system, which even if your not the best platformer, you can still progress. So you always feel like your progressing along with the ability to choose what dragons you want to target. As you beat the obligatory first dragon, you’re launched into a free fall with the ability to pick specific color dragons. Just avoid the Green one as much as possible, that one gets nasty quick. I’m not quite sure what you get out of completing all the colors per area of the “sphere”, but it’s a fun thing to explore. Power-ups are very useful and provide a wide assortment of ways to make it through all the enemies. You can upgrade certain equipment; however, I was not able to get far enough to see the purpose of it. The great thing is power-ups are more or less shared between both characters so you don’t have to be afraid to swap between them.
Watch Highlight: First Impressions | #EarthNIght – @cleaversoft | Gamespace from Aodan on www.twitch.tv

Like, very seriously, this game is beautiful. The music and sound effects mesh so well together. You’re in for both a visual and audio pleasing title. Every backdrop was a great scene and the free fall felt impactful to storytelling. It’s hard not to die from just taking in the visuals of the game. The audio cues are also very helpful with allowing you to know that you can stabby the dragon a bit more for some extra water. Yea, even the text/story in the game has this great beauty and sarcastic feel. I got some great laughs out of the scientist that helps you upgrade, with some witty lines to put you at ease after you stress out trying not to die. There are various dragons and hopefully, later on, there will be more characters and character skins to add to the storytelling.

Thank you Cleaversoft for the key to try out this beautiful game! I think you converted me into liking platformers more!

Tags: Cleaversoft, Earthnight, indie, pc, review
Summary
Simple, yet sophisticated platformer that keeps you coming back for more. EarthNight is a highly addictive platformer with great progression caked in. While this review was done on PC, it is easily a must have for mobile platforms.
Good
Bad
8
Great
Previous ArticleStarship Troopers: Terran Command trailer dropsNext ArticleAlaloth: Champions of The Four Kingdoms – Official Teaser Trailer