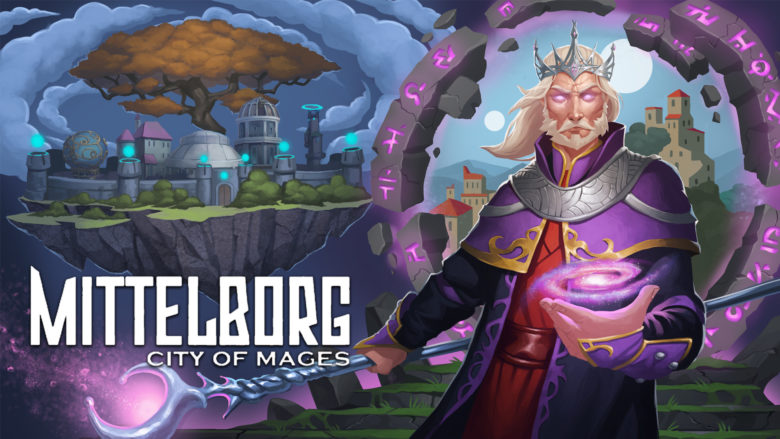 When Armatur Games‘ latest Nintendo Switch release came into our offices I was a bit excited. I knew nothing about the game ironically. Being a predominately Fantasy game player, anything with the word “Mage” in its title is bound to garner some attention from me. Personally I’m not a great real-time strategy player so I was a bit nervous by the game’s self-imposed genre of being a “strategic adventure with elements of rogue-like and resource management”. Nevertheless, this sounded intriguing. So it begs the question. Does Mittelborg: City Of Mages set the gaming world afire like a fire mage on kerosene or does its magic fizzle? Welcome to our Nintendo Switch review of Mittelborg: City Of Mages! 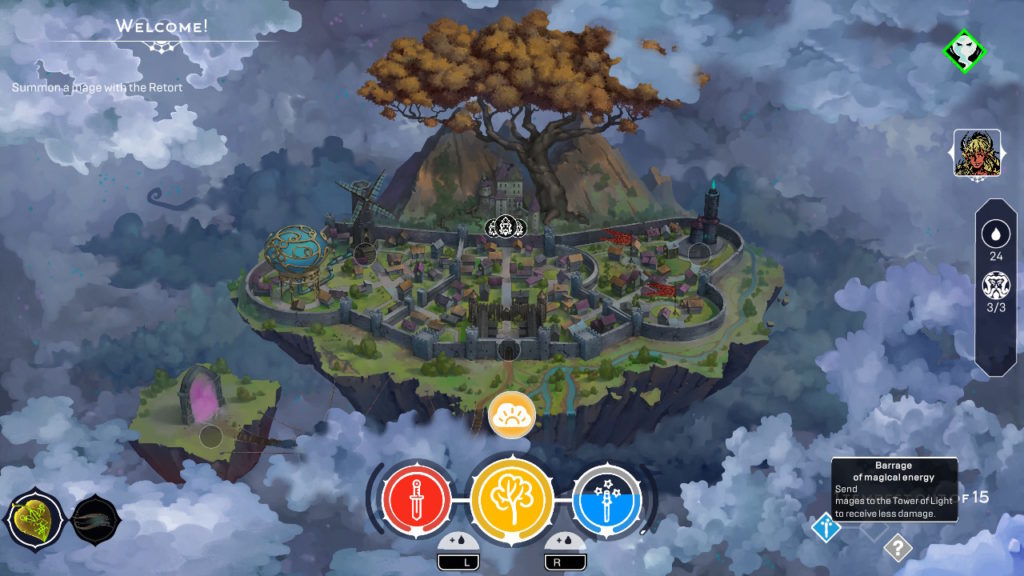 This is THE game screen. Pretty much what you’ll see during most the game.

Mittelborg: City Of Mages was originally released on Steam PC last year in June to mixed reviews. Unfortunately, not enough has changed apparently on the Switch port to sway anyone’s opinion into an opposite direction. Based on the game’s description one would think they are getting into a “Mages’ Civilization” type game. Unfortunately, things couldn’t be farther from the truth.

Mittleborg comes off as being more of a simplified game where you are managing a rather static looking magical city. The goal is to live long enough between rounds of attacks with the intent of protecting the world tree. If the health of the world tree gets depleted you lose, and losing will happen.

Things like tempests and raid attacks happen between turns. Unfortunately, this all happens on a fairly static view of the city, similar almost to a phone game. There is no battle action to behold or watching of forces marching on the move, etc.. The clouds will change colours and buildings will change appearance when you upgrade them but that’s the extent of it.

A Tempest Is Coming 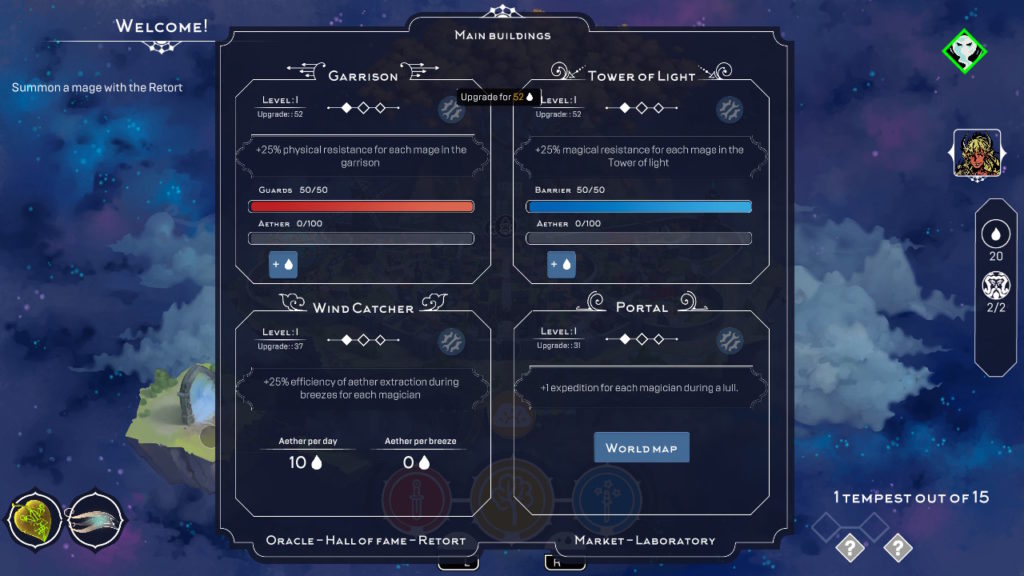 Part of the management side of things.

Mittelborg attacks come at you in the form of raging tempests. You’re given plenty of hints as to what kind of tempest and the likelihood of what that tempest will look like. For example, a wind tempest is likely to have at least one breeze occurrence, hence you’re suggested to move some mages to the Windcatcher tower. This makes it so you’re more likely to get more aether which is a sort of currency to upgrade buildings and such. You move a mage to the Windcatcher tower, then press the proceed button to start the cycle.

Once the cycle finishes you’ll see a dialogue like this one that says what happened and how you can avoid it in the future: 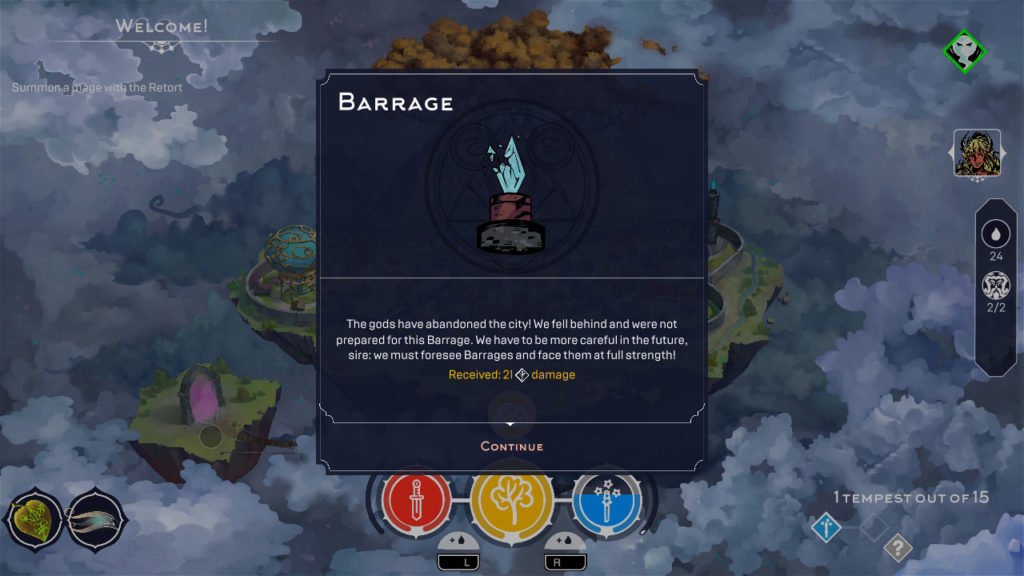 A typical, one turn result screen.

Once the tempest cycle is completed, maybe four to five turns, then a dialogue box pops up letting you know the final overall stats and results. 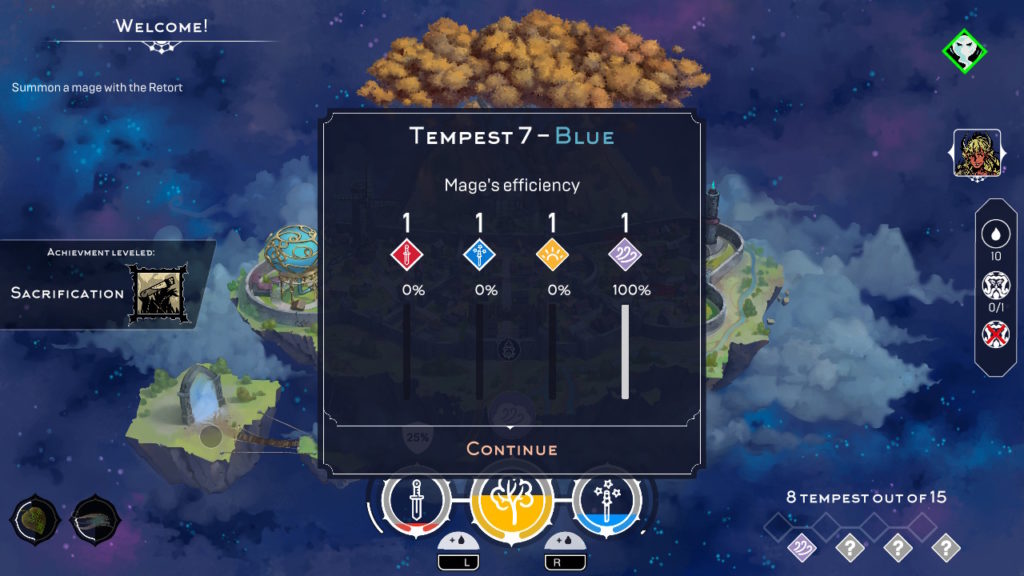 The results of a complete Tempest.

You can lessen the blow from these events with barriers and other protection and by moving resources around in your garrison. A lot of this will, of course, require generating income in the form of aether or sacrificing a mage, etc. You can send mages on missions to acquire “supplies” during a “lull” which the game will tell you when that’s likely to occur. So perhaps you get the feeling that not a lot of deep thought is needed here since there are plenty of breadcrumbs. 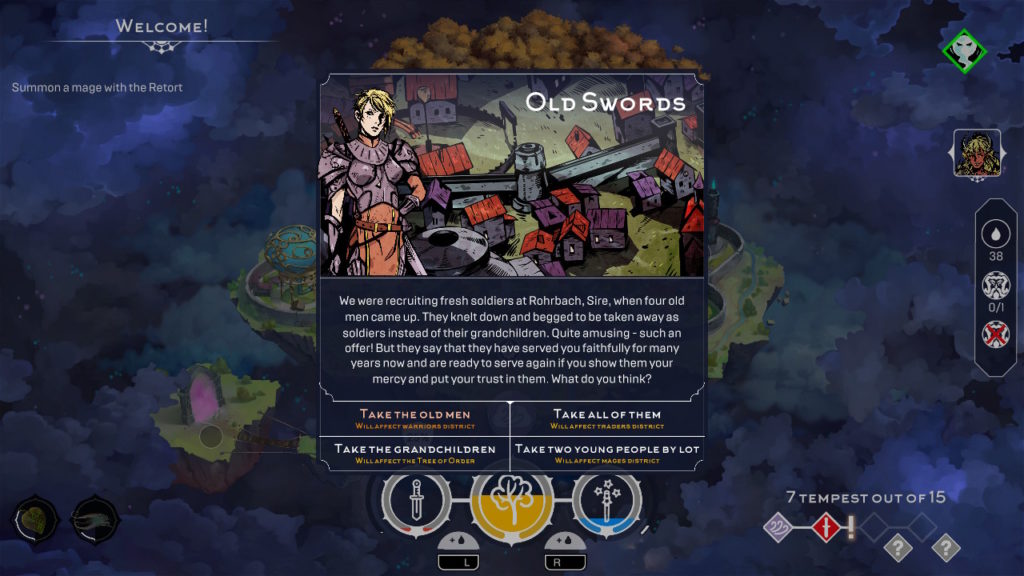 An example event with some pleasing hand-drawn artwork.

During a cycle, random events can happen that require you to make a choice, sometimes a moral choice. This choice will have an effect on a district in your city. Mittelborg‘s user-interface makes it pretty clear which district will be affected. These events are quite random but do contain some pleasing artwork. Thankfully, this text-heavy game is well translated as Armatur Games is a Russian developer.

As far as how Mittelborg plays on the Nintendo Switch there is the typical complaint about text size when used in handheld mode. Too much text and too small. Thank goodness for the Switch’s zoom interface. Also, the controls were a bit unintuitive. You use the joy-cons to move a highlight “cursor” around the screen. There seemed to be no right-to-left or vice versa reasoning to it.

Another example is that mages reside in your quarters which are in the middle of the screen. If you want to move one mage to the Windcatcher tower (on the left side of the screen) you use ZR to move a mage left. This seemed counter-intuitive to using ZL (the leftmost button) to move a mage left. There is also no touch screen support which it seems like this game’s design screams to have. 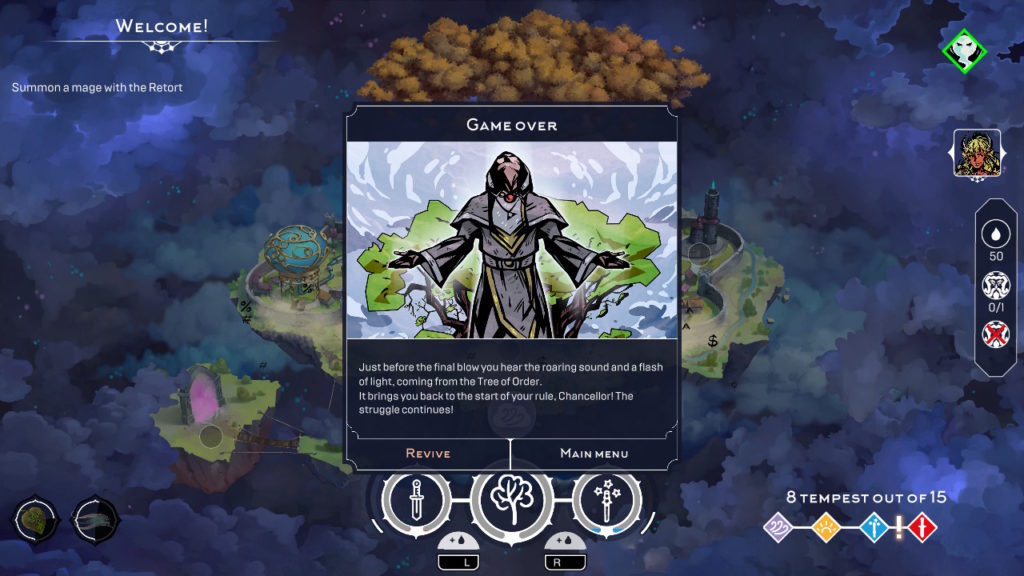 If you lose, the game will give you the opportunity to go back in time to re-execute what went wrong, or you can start a new game.

Tags: Armatur Games, fantasy, resource management
Summary
The design concept behind Mittelborg: City Of Mages seemed to have a lot of potential. One can forgive the non-engaging gameplay but any enjoyment is quickly hampered by frustrating control and a no-brains, overt advisory information approach. The game becomes less about skill and more about random chance.
Good
Bad
5
Average

Written by
Scott Jeslis
Scott is a comic book, music and gaming nerd since the late 70s. Gaming all began on the Colecovision and Atari 2600. He buys and reads new comics every Wednesday from his LCBS and helps run an online Heavy Metal radio station.
Previous ArticleTake A Gander At Untitled Goose Game MultiplayerNext ArticleLast Oasis Adds Cobra Walker 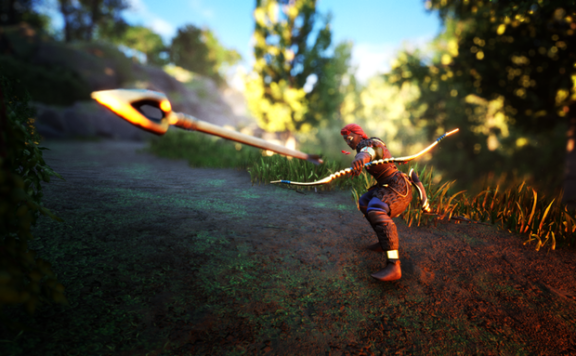