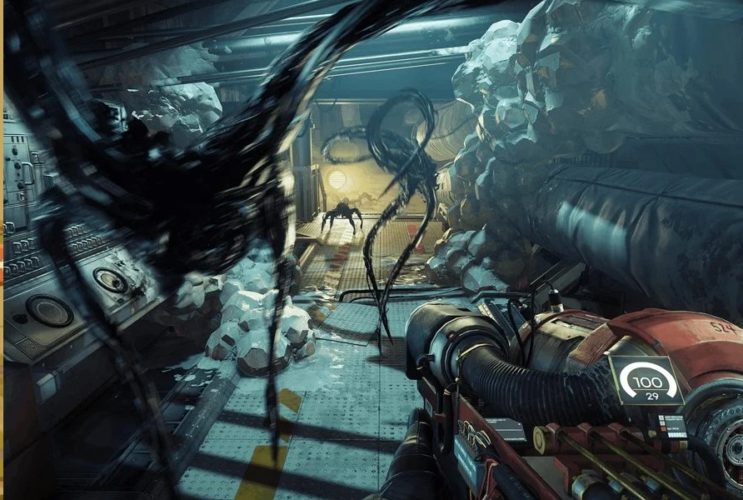 Rumours are rife that Prey might be getting a VR version after a surprise listing Uk retailer ShopTo.

Make a mistake and the internet will know about it. It turns out this is true for listings online too as a UK tech and game retailer might have just spilt the beans on a brand new version of Bethesda’s Prey. For a fleeting moment, it looks like ShopTo published a listing for Prey VR. Fro the listing it appears that Bethesda has upgraded the original Prey release from a few years ago to work on the Sony PSVR platform. While that doesn’t mean it won’t arrive on other platforms, or at all, it opens up a whole set of exciting questions.

Originally released back in 2017, Prey was itself a re imagining of an earlier classic. Developed by Arkane Studios and published by the aforementioned Bethesda, this first person puzzler threw players into an abandoned space station called Talos One with no idea exactly what happened before they blanked out. Taking some definite inspiration from Half Life, as well as the original Prey title, this adventure was critically well received.

This initial release was followed by two expansions. The Typhoon Hunt expansion received Playstation VR support, lending extra credibility that this is likely the real deal and not a very late April fools listing. If you want to check out the potential listing, you’re probably too late but twitter has you covered. The internet captured the listing artwork and details which we’re hoping to see more of shortly. Keep an eye on Gamespace for more on PreyVR if it arrives and other great PSVR titles too.

Written by
Ed Orr
For those of you who I’ve not met yet, my name is Ed. After an early indoctrination into PC gaming, years adrift on the unwashed internet, running a successful guild, and testing video games, I turned my hand to writing about them. Now, you will find me squawking across a multitude of sites and even getting to play games now and then
Previous ArticleHalo 3 Beta Information & Multiplayer ScreensNext ArticleGet Ready For Pokemon Battle Academy On Game Night