Good satire has to be difficult to create.  I mean, it must be, or there would be more of it.  It’s hard to be funny without becoming a clown, and it’s hard to comment on the present without sounding preachy.  To ridicule something without being too on the nose or too obtuse is an art, and it is not an art that has been mastered by the creators of SuperEpic: The Entertainment War.  The game touches on interesting gameplay (integration of QR codes that lead to a website with trash mobile games is an early highlight) but, as with all entertainment, the law of diminishing returns bites hard as the game progresses.  Repetition wears the early promise of SuperEpic down to a nub.  Level design is a snooze across the board.  The writing would feel ham-fisted coming from a middle school kid.  It led me to a minor existential crisis.  This is our SuperEpic review for Nintendo Switch. 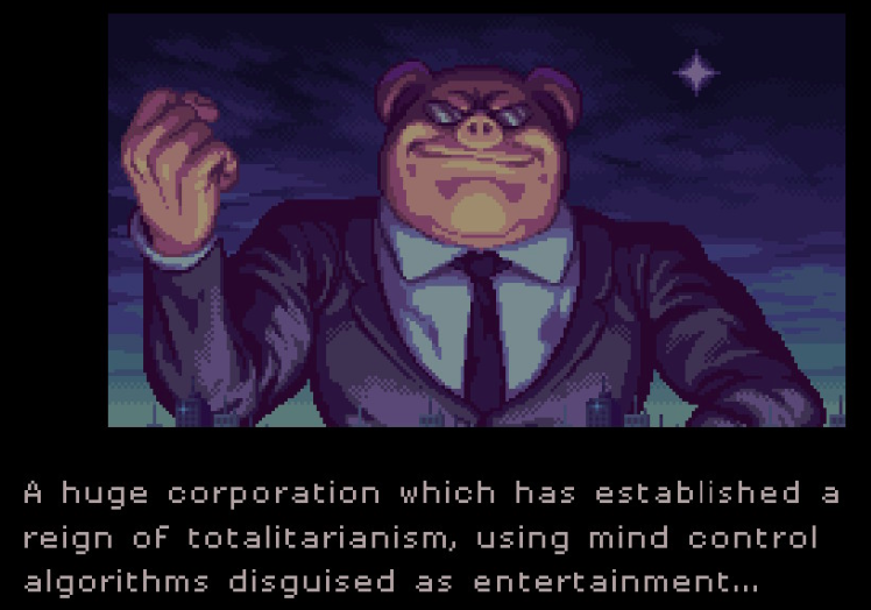 Can you pick up the hundred hidden meanings in this image? Look closely.

In this dark dystopian dark Orwellian Kafkaesque nightmare future, a single game company holds sway over the minds and wallets of the masses.  That company is RegnantCorp (which is a shitty name, and which is just the start, since shitty names are a recurring event in this game).  The pig employees at this piggish corporate company make games called “Flappy Pig Story” and “PigCoin Miner” and pig out on cash and work for a corporation and are pigs.

This aligns with my personal view on corporations, yet it still embarrasses me to write out the game’s story beats.  It’s like a fifteen-year-old found the ‘zine his dad used to self-publish in college and decided to deliver the message of revolution to the woke gamers of a new generation.

The writing vacillates between painfully obvious… 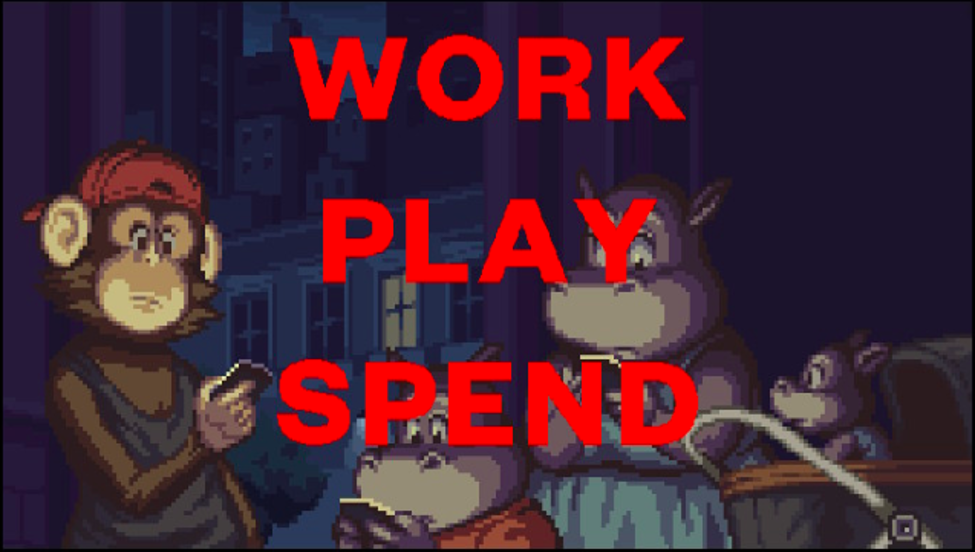 YOU ARE THE CURRENCY, SHEEP! 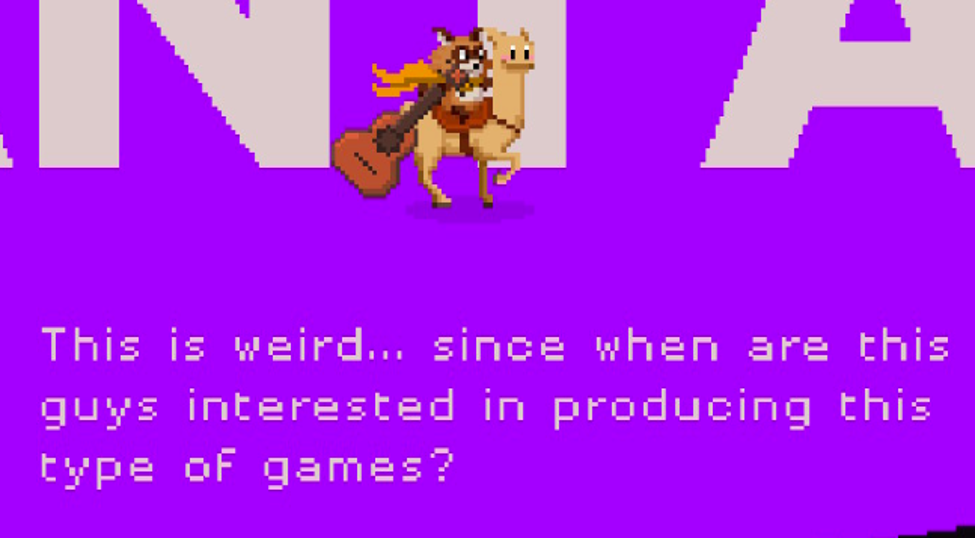 How the fuck do these errors get past everyone who worked on this game?

But enough about being offended by writing that is bad on every level.  Games are there to be played, not read.  So how does it play?

Let me put it this way: you can’t see me (I hope), but I am making an “O” with my thumb and forefinger, and my other three fingers are fanned out straight.  Now I’m moving my hand toward and away from you in tiny gesticulations.

It’s pretty good.  Why didn’t I just say that?

Gameplay-wise, SuperEpic is an old-school beat-em-up that has come down with a mild case of Metroidvania.  You play as Tantan (a paraplegic raccoon riding a llama (don’t ask)), moving from level to level satisfyingly beating the shit out of characters ranging from werewolves to monkeys wearing headphones to some random lady who just wandered into the wrong room while looking for printer supplies.

Pictured: Sarah from Accounting, moments before her untimely death.

Tantan and his llama are part of an insurgency happening at RegnantCorp.  Tantan is in charge of roaming the halls and killing whoever is unlucky enough to cross his path, while a shadowy crew of pigs (shitty name alert: two of the pigs are named Xaloc and Midgorn) supply you with weapon upgrades, special attacks, and energy drinks.  Your attacks break down into a standard smack, an uppercut that you can use to set up aerial combos, and a downwards slam that breaks through defenses and sends enemies hurtling into the ground or each other.  Combat is satisfying for the first hour and tedious thereafter.  You accumulate special moves that aren’t that special and upgrade your weapons so that your damage numbers go up, but nothing really changes from the first level.  You hit enemies until they fall down and go poof, then repeat until you win.

It’s not all just pounding employee ass, though.  As you explore each level, you will run into QR codes that you can scan to play a satirical version of a mobile game from six years ago.  The game takes on such bold targets as Flappy Bird and Crossy Road, making pig-themed versions of each that you can play until you receive a code to unlock items and supplies in-game.

Undercoders has done a respectable job replicating the brainless money drain of free-to-play mobile games.  Every tap of the screen in these side games elicits achievements, affirmations, and bursts of excitement.  After completing some banal in-game task (get past 5 pipes in Flappy Pig Story, for example), you are assaulted with opportunities to buy more levels or cosmetic upgrades or what have you.  The breadth of gameplay on offer is impressive, even if busting out your phone to scan another QR code to play another minigame gets blah after about the fifth time.

That kind of sums up my overall feelings about SuperEpic: strong initial impression followed by a steady descent into boredom and, for me anyway, philosophizing.  Because the game so ably lays bare the manipulative dopamine exploitation of mobile games, and because of a lack of engaging gameplay, and probably because it’s January and this time of year enables an Ourobourian level of introspection when you live in a lonely subarctic Midwestern clime, it caused me to stare into the distance beyond the glowing screen of my Switch, wondering why?

Why am I playing this game?  Why any game?  Why do anything?  Why wipe? 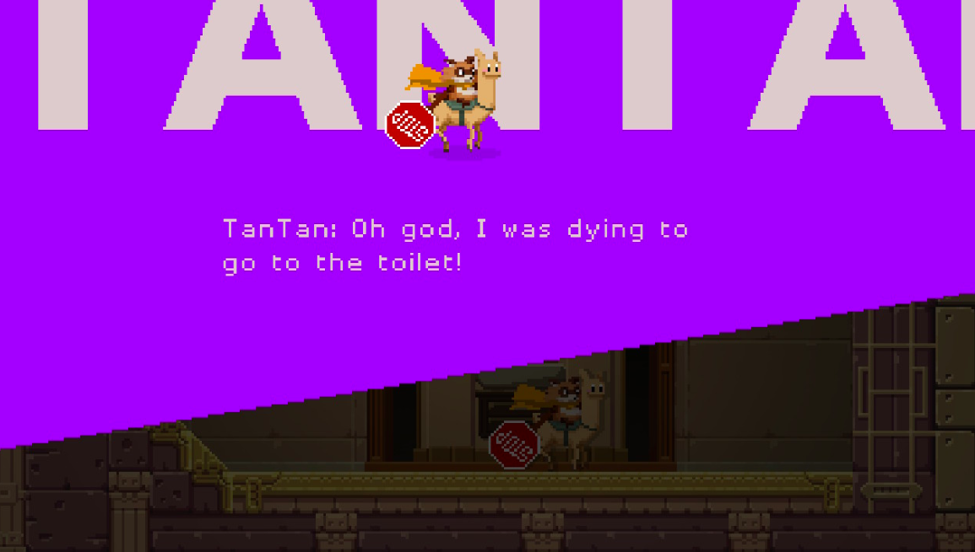 We wipe because we are dying to use the toilet.

I wanted the game to become more, to break me out of the doldrums of questioning.  I suppose that is a lot to expect.  Once the navel-gazing began, I had no more desire to return to the game, either because the gameplay didn’t evolve over the course of the game, or because I was having a hard time picking up a napkin without wondering why anyone does anything.  It was an awful time to get cosmic, but I have to at least semi-blame SuperEpic for not being interesting enough to pull people away from the point it is trying to make about gaming.  I’m aware that my brain took it all a little too far, but still, if you are going to say that a type of game is there to make you feel good without substance, then your game better not feel like it’s doing exactly that.

SuperEpic has nowhere to go after it comes screaming out of the gate.  Its engaging initial gameplay never really evolves past button-mashing.  Decent sprite work is derailed by environments that are so bland as to defy recollection.  Its own commentary on the bereftness of mobile games ends up being a commentary on itself, and leaves you a lonely, wandering shell, questioning your gaming habits, your existence…everything.

Okay, maybe that last one is just me.

Anyway, I can’t exactly recommend it, but if you’re looking for something forgettable to while away the hours and you feel like slapping around some increasingly-nonsensical enemies with a plunger, this could scratch a minor itch.

I’m going to go outside now, and stare at the snow.

Tags: nintendo switch, review, SuperEpic, SuperEpic: The Entertainment War
Summary
SuperEpic has nowhere to go after it comes screaming out of the gate. Its engaging initial gameplay never really evolves past button-mashing. Decent sprite work is derailed by environments that are so bland as to defy recollection. Its own commentary on the bereftness of mobile games ends up being a commentary on itself, and leaves you a lonely, wandering shell, questioning your gaming habits, your existence...everything.
Good
Bad
6
Fair
Previous ArticleFirst Disintegration tech beta begins next weekNext ArticleTwin-stick shooter Project AETHER announced 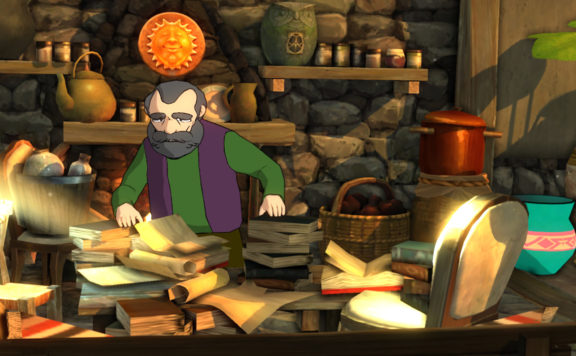