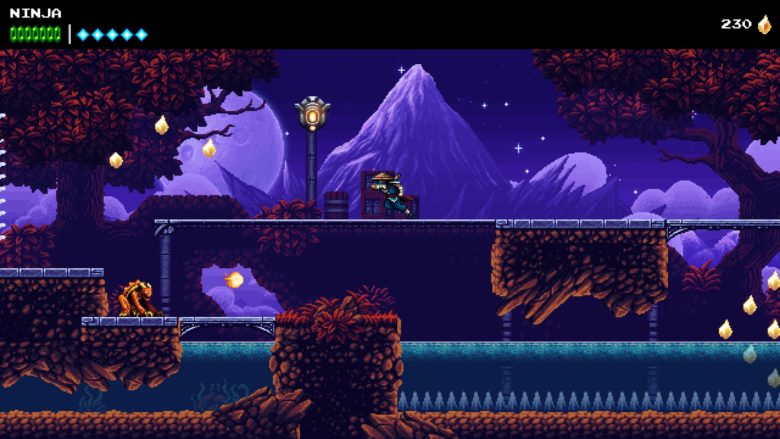 Ninjas are not to be messed with, especially when they come in the form of Devolver Digital’s very own retro demon slayer. Now The Messenger is adding a whole new technique to its arsenal with a brand new update, out now.

The Messenger is the work of Sabotage, an indie studio set up by Thierry Boulanger and Martin Brouard in April 2016. It encompasses the tale of an enigmatic young ninja who sets out on an epic journey after a demon army begins to attack his village. After winning several awards before it even launched, The Messenger went on to slay players on PC and Nintendo Switch. This mix of retro 8-bit action, which morphs into a time traveling 16-bit Metroidvania challenge is a fantastic mix of retro aesthetics, deadpan humor, and great audio accompaniment.

It also features some fantastic replay value, hence the new update. The update, which launched November 21, allows ninjas to add a brand new save slot to their adventure. For anybody who has been desperate to go back and try one more time, this provides a new kind of save. Once players have a fully completed save slot with 100% completion a new slot will arrive with a + beside it. This will allow players to start a new game and will feature all previously unlocked upgrades. It will also will up the overall difficulty, increase incoming damage, and elevate boss HP. As if that was not evil enough, every save in the + slot appends an additional + to the slot name, ratcheting up the damage taken and boss HP. Don’t try to save too often or every enemy will be a One Punch Man.

Sabotage has also added a Jukebox, because why not. Sabotage has also promised even more news during the Kinda Funny Showcase, on December 8 at 10am PST. The latest update for the Messenger is already available and you can find out more about this title on the official website.

Written by
Ed Orr
For those of you who I’ve not met yet, my name is Ed. After an early indoctrination into PC gaming, years adrift on the unwashed internet, running a successful guild, and testing video games, I turned my hand to writing about them. Now, you will find me squawking across a multitude of sites and even getting to play games now and then
Previous ArticleSTEAM HIGH FIVE: After Dinner EscapadesNext ArticleSpellbreak Community Highlights – vandal