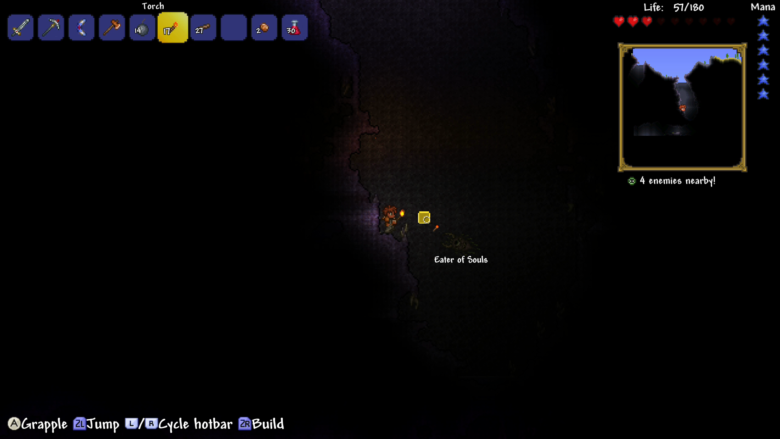 If you have not been around the PC gaming market, Terraria is a behemoth. Joining the ranks as such colossal titles as World of Warcraft, PlayerUnknown’s Battlegrounds, and Minecraft, Terraria is one of the top five games sold on the PC platform. Boasting 27 million copies sold (with 12 million of those on PC), Terraria took Steam as well as mobile and console platforms by storm at the zenith of the Minecraft craze and it just doesn’t know when to quit.

With experience on mobile platforms like iOS and the console market, Re-logic has rereleased this juggernaut onto the perfect marriage of both the mobile and home console: the Nintendo Switch. Within this review, we will be covering just how well Terraria translates and whether or not this is the right platform for all of your 2D building, exploring, and home decorating needs. This is our review of Terraria on Nintendo Switch.

To preface this review, I have been playing Terraria from the beginning with countless hours logged and many, many worlds explored on multiple platforms. While I may draw parallels to the PC version (which has been the lion’s share of my experience), make no mistake that Terraria for Switch stands on its own two feet as a great blend of console convenience with touch screen innovations. 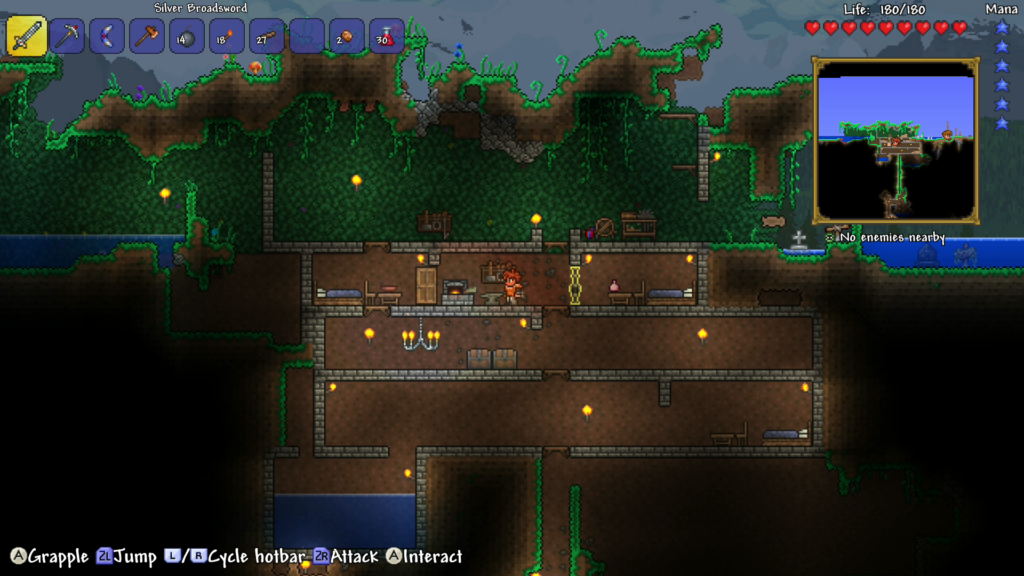 Let’s talk about the touch screen for a moment:

One of the challenges that I have experienced playing Terraria on the console is that I found myself missing the speed and precision of the keyboard and mouse. While the console versions make up for this with two switchable cursor modes, it just felt foreign. The Switch takes advantage of the touch screen in handheld mode by allowing you to touch, pinch, tap, and drag to manage inventory items, craft, use items on the hotbar, equip items and more.

These quality of life feature more than corrects for the differences speed and control between the PC and console versions… at least when dealing with inventory management. Building is another story all together. While using the touch to build or mine, you will get a magnified area around the area you are targeting, but I have big fingers. A stylus may prove to be a bit more useful than a finger if you are looking to use the touch features to build. That being said, I don’t mind switching to the thumbtacks for building and precise mining. While it is a bit slower, Terraria is not generally a game that you play to speed run; it’s about the journey.

From a gameplay perspective, Terraria is pretty much the same eldritch-horror-wrapped-in-a-sunny-pixelated package that we have come to know and love over these past eight years. You will take up the fight against the Corruption, fighting bosses and surmounting events throughout the twenty biomes of each procedurally generated world you create. You will dig, explore, build, and craft your way to great success with the help of NPCs and, potentially, some of your friends.

At launch, Terraria supports a multiplayer option through Nintendo’s online service, but does not have local split screen cooperative play like other console releases. Re-logic does have plans for couch co-op along with local wireless multiplayer in future patches. 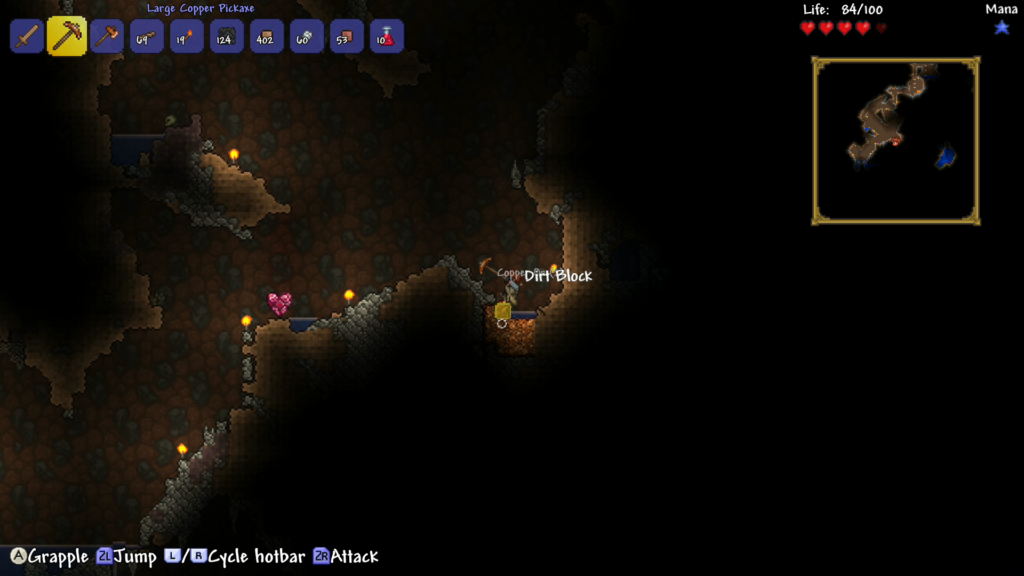 Speaking of patches, with patches on multiple platforms, the launch version of Terraria on Nintendo Switch is the equivalent of the 1.3.0.7 patch on the desktop which trails the 1.3.1 patch that is active on Playstation 4 and Xbox One as of May 2019. To give some context, these patches place the console versions about three years behind the current desktop version with a 1.4 “final” patch recently teased by Re-logic in June 2019.

With the portability of the Switch, addition of touch controls, and the ease transition between console and portable, if you are looking for a 2D sidescrolling sandbox game with a 16-but aesthetic where you can get lost for hours digging, building, crafting, and fighting, Terraria will scratch all of those.

At the publishing of this review, Terraria is $29.99 USD digitally on the Nintendo Switch. A physical release is also available as well.

COMPARE TO: Starbound, Dig or Die, It Lurks Below

Tags: nintendo switch, Re-logic, review, Terraria
Summary
If you haven’t played Terraria, but are looking for an entry point that marries some mobile conveniences with the console experience, Terraria on the Nintendo Switch is a great place for you to begin your journey. The touch screen controls, while more challenging for precise building, add a positive dimension to the crafting and inventory management systems. While multiplayer support is limited to live services at launch, when you pair the aforementioned quality of life features with the tried-and-true gameplay experience that Terraria has developed over these past eight years, you have a winning formula.
Good
Bad
9
Amazing

Written by
Damien Gula
Born in the heyday of mullets and the El Camino to a tech-foward family, Damien (a.k.a. Dame, PastorDame) quickly embraced the reality that “normal” is just a setting on a dryer. Damien is a pastor by trade and loves talking with anyone who is interested about life, God, and video games (in no particular order) - so, much so, that he and fellow MMORPG/GameSpace writer Matt Keith (Nexfury) create a podcast dedicated to that conversation. At the end of the day, Damien is a guy who loves his wife, his Mini Schnoodle, and crafting gourmet bowls of Mac N’ Cheese.
Previous ArticleRefused Is The Sound of Cyberpunk 2077Next ArticleRainbow Six Siege – Prepare for the Showdown 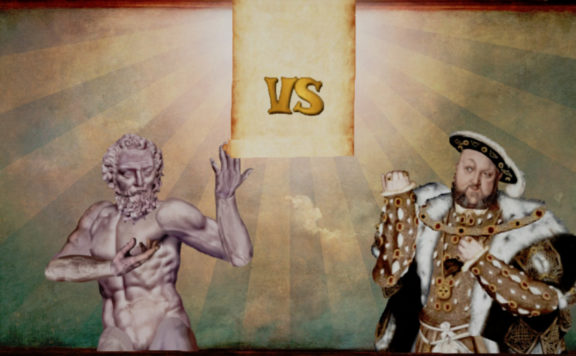 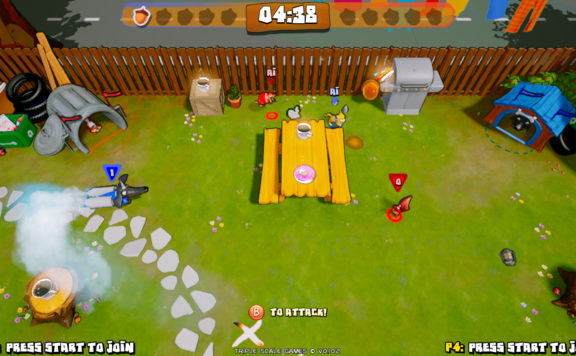